Can an out of shape NFL fan get legally drunk and pass a professional conditioning test?

Share All sharing options for: I drank a Mad Dog 20/20 and attempted an NFL conditioning test

We do not recommend you try this. All spelling errors are intentional, we think. -Ed.

Folks if theres one thing I hate about training camp besides all the wannabe securty guards who wont let me in any more, its entitled players who show up out of shape and not ready to work. This year the award of "most out of breath" goes to Buffalo Bills Defensive Tackle (probly the only time you'll hear those 4 words in a row all season folks) Marcell Dareus.

Doug Marrone: DT Marcell Dareus failed his conditioning test upon reporting for camp. "He needs to focus on getting himself ready"

Dareus showed up in worse shape then Reggie White this week folks no offense. . Now Im not a professonal math guy or anything but it seems to me that if your making more millions then minutes you can last on a slow jog, thats a problem.

The most important sci-fi football novel ever

The king of ProFootballTalk wrote a book about time traveling quarterbacks, and it is required reading for any real NFL fan.

The untold story of the 1987 offseason.

I dont no, maybe Dareus is failing his conditoning test on purpose to leverage a advertising sporsorship with Pert Plus or something, you never know with these guys. If you had told me that Dareus was faling a speed test I would of thought he did it by peeing in a cup not puking on a track folks. The irony is Dareus cant seem to go fast enough on the interstate, getting busted for hosting his own Fast and Furious drag racing which is ironic because the second he start's running windsprints you can go ahead and call him "Mr. Walker."

Any ways this got me remmember way back when Albert Haynesworthless failed like a million conditoning tests in a row in 2010. I dont really blame Haynesworth so much for failing those given that usually when you show up in no shape to do your job in Washington DC they just immedately hand you a nobel peace prize and sign you to a second 4-year contract for no good reason.

But I took it up on myself to see if I was in football shape by attempting the classic Haynesworth conditoning test. Now my job as the ultiate NFL fan isnt so much diffrent then Dareus and Alberts: They play DT on Sundays, I experience DTs on Monday mornigs. They play in a 3-4 defense and thats how many beers I like to drink per quater. So to mimic this I set the following rules for my conditoning test:

1. I would drink a entire Habernero Lime-A-Rita Mad Dog 2020 immedately before running.

Attn browns: I have kid napped your mascot & goign to make him run conditoning tests with me after I properly hydrate pic.twitter.com/fK9JRxiaBE

I watched First Take wile I was doing this, let me tell you, nothing pairs better with watching Stephen A Smith and Skip Bayless then a nice fortfied wine.

I would set up cones 25 yards a part. I would need to run back &fourth 6 times in under 70 seconds, then give myself a 3 minute brake, then I would need to do it again in under 73 seconds. I woud also wear jorts. Beside's the jorts, this is the official Haynesworth test. except Hayenesworth got 5 minutes to recover between run's. Folks if you wanted to watch me do absolutley nothing for 5 minutes you should just watch my sex tape!!

3. I needed a impartal judge to time me so I set up a craigslist post:

So I hired a prostute to time me, and I drank the entire bottle of maddog and it was delcous needless to say and I was drunk. 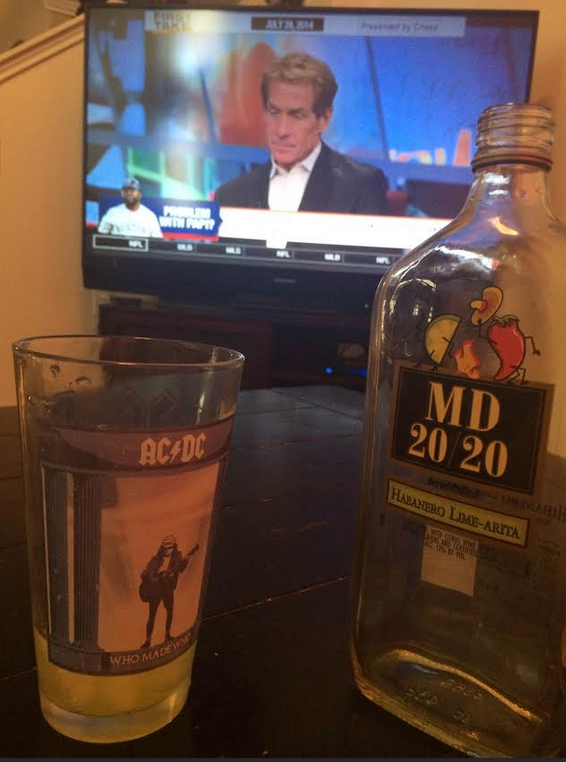 But I needed a extra element of hydraton so I also drank a Mich ultra right before I started. I also drank a ice cold Michlob ultra in between sprints since it is literally the Gatorade of beers. Could I accomplish the inpossible? Watch here to find out:

Final verdict: Honestly embarassing for Dareus and Haynesworth. Im a average fan in midseason form and I passed there stupid conditioning drill with a BAC of .14. I got faster the drunker I became and thast how you know Im ready for a year of cutting in lines to use the bathroom and alluding security guards on the field during a live play. To be honest Im probablly a better football player then Marcel Dareus right now and if you dont believe me then you dont know anything about football.