Even a kid can recognize Andre Reed's greatness

For one Buffalo Bills fan, Andre Reed was more than just a great football player — he was responsible for the genesis of his obsession.

Share All sharing options for: Even a kid can recognize Andre Reed's greatness

I decided to fully commit myself to being a Buffalo Bills fan on Jan. 3, 1993. Andre Reed made me do it.

In retrospect, it feels a little cheap. The Bills were already great; they had just made the playoffs for a fifth consecutive season, had been to two straight Super Bowls, and the organization was practically overflowing with future Pro Football Hall of Fame members. That list, of course, now includes Reed, who on that day had been to four straight Pro Bowls, and was en route to a fifth.

But nobody has that perspective at age 7. My association with the team up to that point was more about predisposition than genuine enthusiasm. My father had only just begun taking me to home games at Rich Stadium, carefully laying the groundwork for my eventual leap into full-fledged sports insanity. (I am, after all, still a Bills fan).

Our family lived in southeastern Pennsylvania at the time, putting us closer in proximity to New Jersey and DC than to Buffalo, landing us on the periphery of Giants and Redskins territory. Guess who beat the Bills in those aforementioned Super Bowls? It’s not especially fun taking crap from sports-ignorant grade schoolers regurgitating the hilarious quips of their gloating fathers, especially when you haven’t yet had that moment of clarity about why you really do love the thing you’re supposed to love.

Derrick Brooks made it look easy

For 14 years, the Tampa Bay linebacker was the master of his craft.

I had a wicked ear infection on Jan. 3, 1993. My mother fired up a heating pad, and I spent nearly the entire first half asleep with the right side of my face pasted to that radiating strip of material. She laid it on a chair, so that after laying my ear on it, my eyes were arranged perpendicular to everything transpiring on the television. The sleeping and disorientation played a part in keeping me on the path toward Bills fandom; my already fragile sports psyche might have crumbled beyond repair had I actually witnessed the Bills falling behind, 28-3, at the hands of the Houston Oilers.

I woke up in time to see Bubba McDowell return a Frank Reich interception for a touchdown to open the second half, and with Dad’s team trailing 35-3, I pressed my right ear back to the heating pad in an attempt to sleep through both disease and a downcast living room atmosphere. My mother left the house for a walk. Dad paced restlessly. I have no recollection of where my 4-year-old sister was at that moment, but she’s alive today, and all's well that ends well.

By the time Mom returned from her walk, the Bills had cut Houston's lead to 35-24, and Reed had done his part to permanently hook me into my current Bills obsession. She was out of the house for however long about 10 minutes worth of pro football takes in real time. Dad played the superstition card and wouldn’t let mom back into the house, a decision he still regrets to this day. (They’re very happy, but her memory is also very long). It was that first of three Reed scores, a toe-tapping, 26-yarder up the left sideline from Reich, that was when I blossomed as a Bills fan.

As my father attempted to explain the finer points of how my mother's return to her own residence would diminish the Bills' chances at securing an impossible victory, I replayed that score in my mind, over and over again. I hadn't done that with anything to that point in my life other than specific scenes of Teenage Mutant Ninja Turtles episodes.

Reed took over the game from that point forward. Keep in mind: Hall of Fame quarterback Jim Kelly was sidelined by injury, and Hall of Fame running back Thurman Thomas was limited by an injury of his own. Sure, Hall of Fame receiver James Lofton was on the field, but if you’re the Oilers, the guy you’re trying to stop is Reed. It certainly isn't Reich, who had attempted just 47 regular season passes in 1992, half of which came in a 27-3 thumping at the hands of those same Oilers one week prior to this contest. You're probably not keying on Kenneth Davis, either, despite his being a highly underrated part of those Bills teams as the backfield complement to Thurman.

You focus your attention on Reed, the all-everything wideout, and the best player on the field.

He scored his first touchdown with 4:21 remaining in the third quarter, bringing the Bills to within 11. He scored his second touchdown 2:21 in game time later, and with 3:08 remaining in regulation, Reed’s third straight touchdown gave the Bills a 38-35 lead. Buffalo went on to win that game in overtime, 41-38, in what is still the greatest comeback in NFL history. 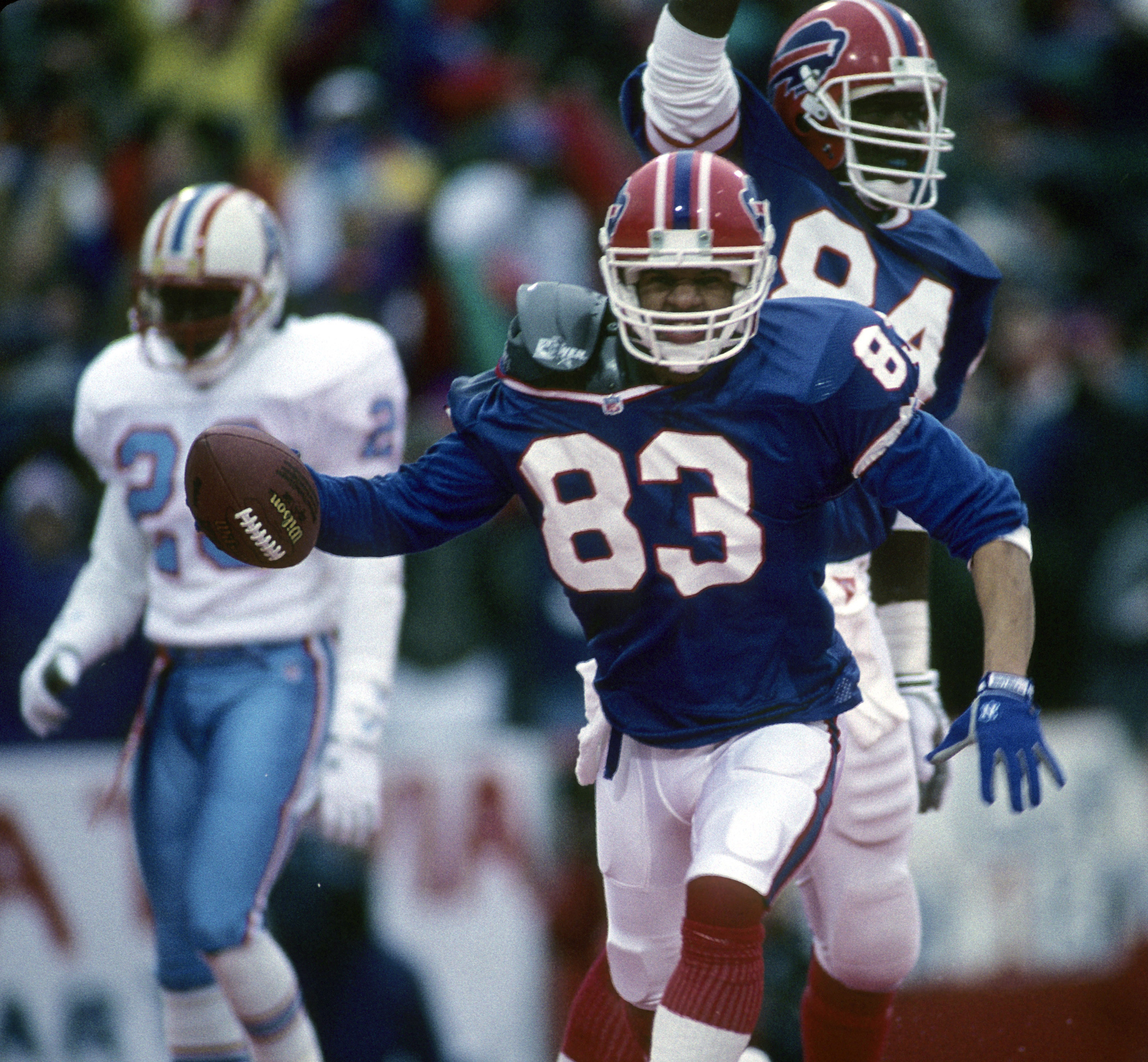 That game did a lot to exemplify Reed at his best. He caught eight passes for 137 yards and those three scores, all of which came on routes run out of the slot. In an era when NFL offenses were still generally plodding and run-heavy, the Bills’ "K-Gun" attack broke the mold with simplified calls and a faster pace. Kelly was the brain of the operation, Thomas the star, but Reed’s work in the slot helped to spark something of a revolution in the NFL.

Today, slot receivers are a near-constant presence on the field, and are often a team’s go-to passing game option. Reed had enough size and length to win on the outside, which he did a lot of, but it was his quickness and unparalleled ability after the catch that made him special and especially deadly inside. Those traits defined his career. He retired after the 2000 season as one of the most productive receivers in the history of the sport, hauling in 951 passes for 13,198 yards (13.9 yards per reception over a 16-year career for a slot receiver) and 87 touchdowns. 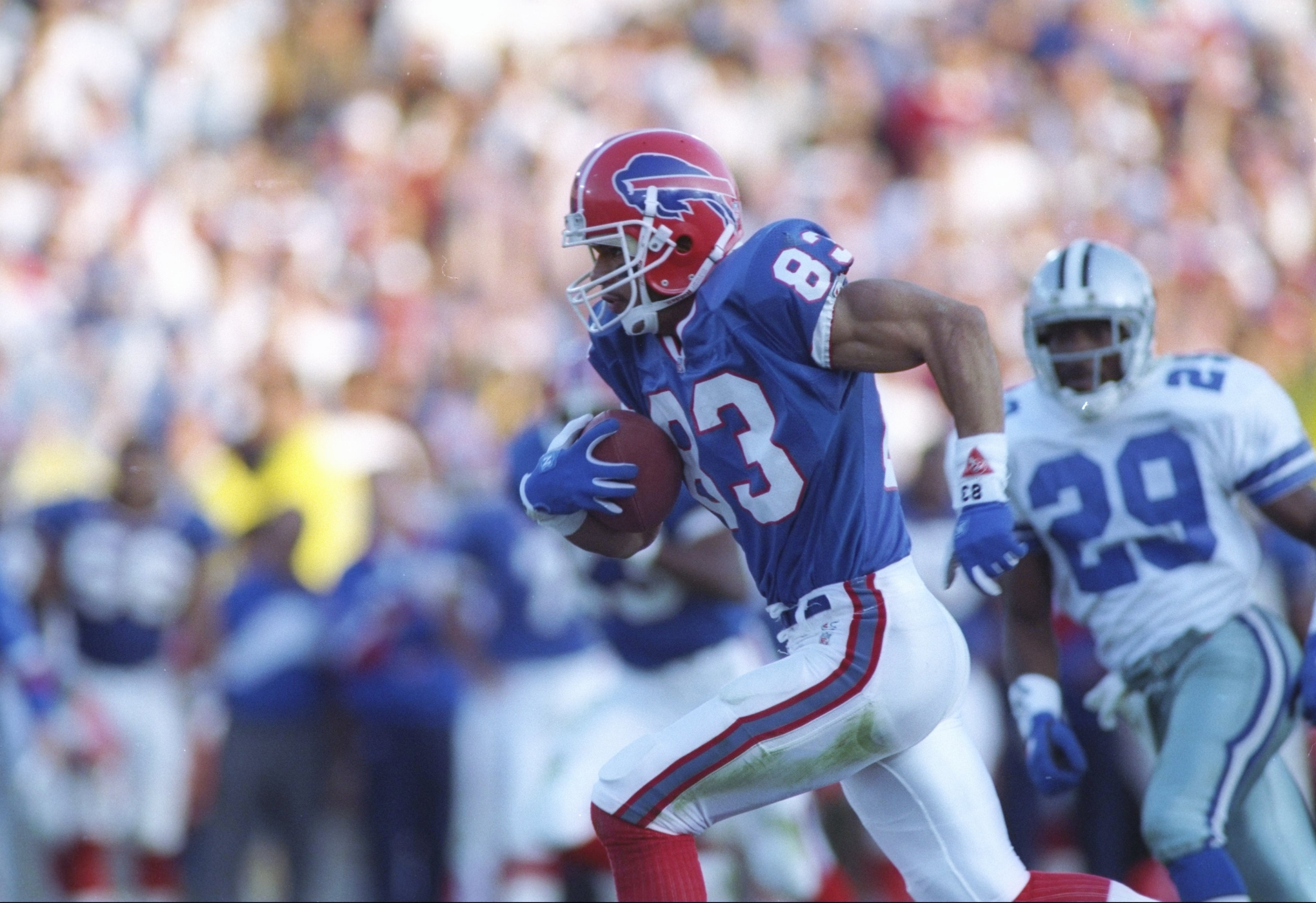 This is information, and perspective, that can be gleaned by talking to anyone who saw him play, or even with average-level proficiency at the Internet (start here). For Bills fans who were old enough to appreciate Reed the player when he was playing, their tales of his unbelievable career are a bit more clearly recalled, the memories not as fuzzy and that much more meaningful.

Reed’s Bills career ended when I was 14 years old, but while I had the pleasure of seeing him play for a decade, a true appreciation of what he meant to the game came later. It even took re-watching that comeback win over Houston, years after the fact, to fully grasp how dominant he was for a banged-up Bills team in a desperate situation.

Even a 7-year-old could recognize Reed's greatness. His first touchdown against Houston in the comeback game — which I watched vertically, with Reed gracefully backpedaling into the end zone from the top of my field of vision to the bottom thanks to that infernal ear infection — is my earliest, most vivid memory of Bills football as something more than a way to hang out with Dad. The play was beautiful. So was the aftermath: dad losing his mind, my little sister laughing and dancing for reasons beyond her comprehension, and me falling head-over-heels in love with the Buffalo Bills.