Sam Bradford was the next Peyton Manning, then he was a bust. Can he settle in between this season?

Share All sharing options for: Sam Bradford's still searching for a happy medium

There was a time during his rookie season when fans, coaches and media couldn't praise Sam Bradford enough. He was voted as Rookie of the Year, fans tossed out Peyton Manning comparisons and even an opposing head coach was effusive in his praise:

"Well, I've been watching him a lot throughout his collegiate career and in preseason games he went pretty good," then-Washington head coach Mike Shanahan said in 2010, via The Washington Post. "He's very impressive. He's a guy that comes around once every 10 years, in my opinion. He's that type of quarterback. Maybe 15 years."

Four middling and injury-plagued seasons later, you can still find those who support and praise Bradford, but there are just as many, if not more, detractors. Those in the pro-Bradford camp will point out the lack of talent around him, the number and quality of his offensive coordinators, and his stats in 2013 before he was hurt. The anti-Bradford group will point out his career stats, the injury issues and his inflated contract.

Regardless of which argument currently holds more weight, the fact remains Bradford is running out of chances and time to become a franchise quarterback in St. Louis. He has two years and $27 million remaining on his rookie deal. At some point soon, the Rams are going to have to decide whether to push for an extension or go in a different direction. That time could be as soon as this season, making the 2014 campaign the most important of Bradford's career. 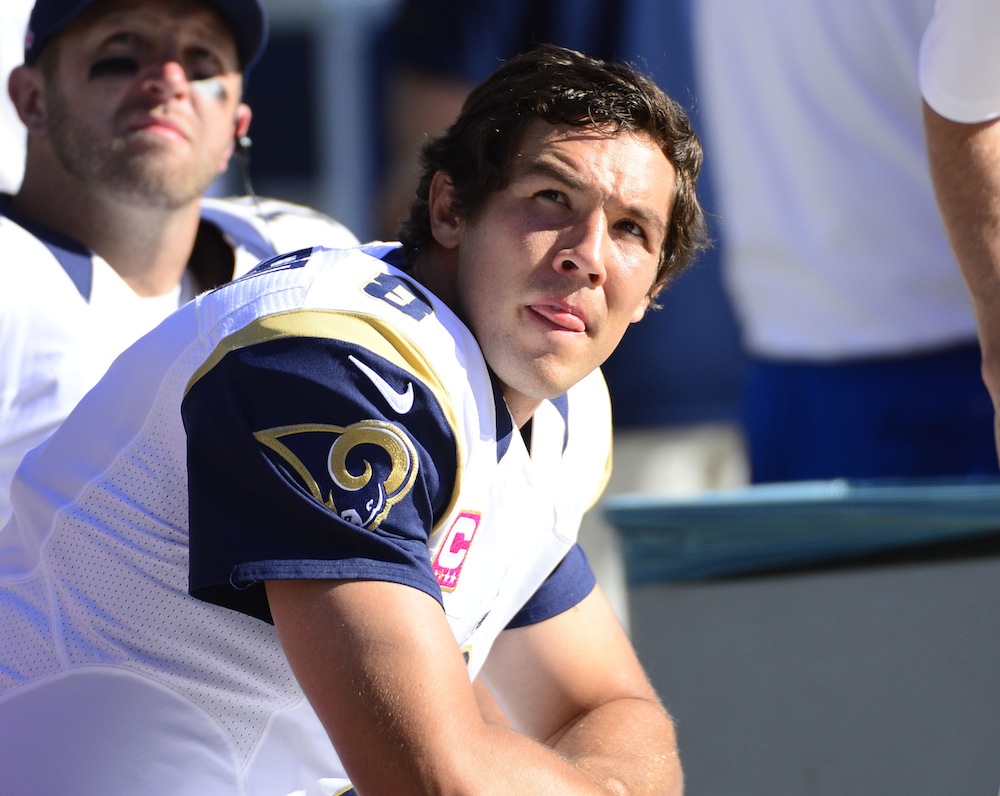 Coming out of Oklahoma, Bradford was the type of quarterback prospect teams dream of. At 6'4 and 225 pounds, he had prototype size to go along with a strong and accurate arm. He made good decisions and seemingly had every trait of a future franchise quarterback. At times during his rookie season, it appeared to be a matter of when and not if Bradford would join the NFL's elite. Playing with a lackluster group of skill players, Bradford threw for more than 3,500 yards while leading St. Louis to within a game of the NFC West title. He was named Offensive Rookie of the Year for his efforts.

While the praise came in heavy doses, there were warning signs. Bradford averaged just 5.95 yards per attempt and threw nearly as many interceptions (15) as touchdowns (18). Those issues were mostly written off to a weak supporting cast.

It’s like everyone knows him, but no one knows who he is. Sam Bradford is the biggest enigma in the NFL. - Turf Show Times

There were high hopes for Bradford and the Rams heading into 2011, but they didn't last long. He and the team struggled, losing the first six games of the season. Bradford completed just 53.5 percent of his passes, tossing six touchdowns and six interceptions in 10 games. An ankle injury caused him to miss the final six games. On his third offensive coordinator in three years, Bradford was better in 2012. He set career highs for yards (3,702), yards per attempt (6.7) and touchdowns (21). He started all 16 games, but the Rams came up short of the playoffs, finishing 7-8-1.

Bradford was off to a strong start in 2013, tossing 14 touchdowns to four interceptions while averaging 6.4 yards per attempt through the first seven games. Nine of those touchdowns came in three games against the Falcons, Jaguars and Texans, three of the league's worst pass defenses last season. He suffered a torn ACL in Week 7 and missed the rest of the season. His 90.9 passer was the best of his career, but the injury once again derailed his progress.

Publicly, the Rams voiced consistent support for Bradford, but there were rumors around the draft that they were shopping him on the trade market. How much validity those rumors had may never be known; the Rams made a public commitment to Bradford days before the draft.

With a host of other young quarterbacks finding quick success, both statistically and in the playoffs, the criticism of Bradford has begun to mount. He hasn't led his team to the playoffs, like Colin Kaepernick and Russell Wilson. He hasn't put up big numbers in losing efforts either. He was expected to be the next Manning or Aaron Rodgers, but instead he's performed like Andy Dalton with a worse supporting cast. That won't buy a former No. 1 pick much leeway, especially when you factor in Bradford's massive contract.

Entering the fifth year of his career, the stakes would be high for Bradford to perform regardless of his contract. The fact that he has salary cap numbers in the $17 million range in each of the next two seasons only magnifies 2014 as a make-or-break season. If Bradford doesn't perform next season, or again suffers through an injury-plagued campaign, the Rams can release him and save nearly $13 million in salary cap space. Would they really justify absorbing a $16.58 million cap hit in 2015, to give Bradford yet another chance to put it together?

The St. Louis Rams are entering the third year of the Jeff Fisher era. That means there are quite a few players who are entering their third year with the team. With two full seasons under their belts, how will they fare in year 3?

It seems unlikely Bradford would ever play the final year of that deal. Either he'll have the season St. Louis fans have been hoping for and be an obvious candidate for an extension, or he won't and the team might decide to move on. Bradford is entering his third year with the current staff and will play with the most talented crop of skill position players in his career. The Rams' offensive line should also be improved. All of the pieces are in place for Bradford to maximize his talent.

Heading into 2013, there were two questions surrounding Bradford. The first was whether he could be an above-average starting quarterback. If the first seven games of last season are any indication, Bradford is ready to join the upper half of NFL quarterbacks. If he maintained his production for a full 16-game season, he would have finished with 3,856 passing yards, 32 touchdowns and nine interceptions. Those numbers aren't going to win any MVP awards, but they would make Bradford a top-10 type player.

If we assume he can maintain or even improve on that level of performance, there is only one question left: can he stay healthy? Bradford participated in offseason workouts, so the knee injury should be a non-factor. Improved play from the offensive line should lead to him taking fewer hits, but he will still get hit. Bradford has had injury issues dating back to his college career and questions of whether he can play a full season won't go away until he does multiple times in a row. If he stays healthy and if he picks up where he left off in 2013, he could easily have the most successful year of his career to date.