A closer look at the Johnny Manziel offense

The Browns rookie quarterback made his hotly anticipated NFL debut on Saturday night. Danny Kelly takes a closer look at the tape to see if Johnny Manziel is ready for the NFL.

Share All sharing options for: A closer look at the Johnny Manziel offense

Johnny Manziel finished his NFL preseason premiere with a nondescript line — 7-for-11 passing for 63 yards, no picks, no touchdowns, and 27 yards rushing on six attempts — over five series spanning the second and third quarters, and all against Detroit Lion backups. While the numbers themselves were thoroughly unexciting, fans, and more importantly, the Browns organization had some things to feel good about.

One of the most common things you see from rookie quarterbacks in their first few games (and in the bad cases, this doesn't go away) is an apparent lack of confidence. Confidence isn't a measurable trait nor is it objectively observable, but I do think it's possible to perceive a tentativeness in throwing the football, a frenetic affect, passiveness, bewilderment, confusion, or in some cases, fear. Manziel had none of these traits in his first NFL game, in my opinion, and looked calm, confident and poised. It's a cliche, but the game did not look "too big" for Johnny Football in this one, particularly in the context of the situation.

His first pass was a good indication of this. 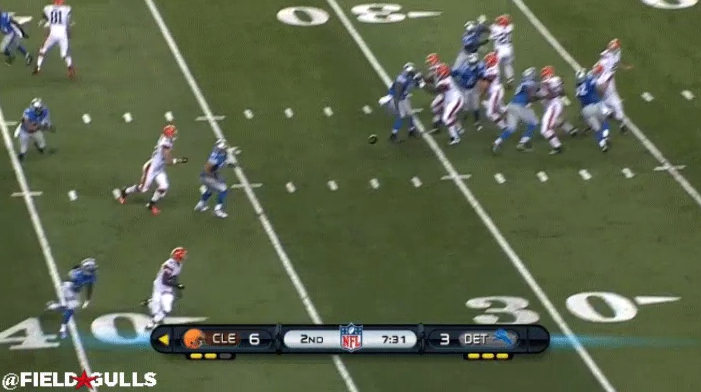 Manziel didn't hit any "wow" throws or even throw it deep in his first game, but he did let a few intermediate-range passes rip downfield, and he threw with a tight spiral and generally with good accuracy and timing. There were exceptions, of course, but nothing egregious. He had one pass sail high on him. He had another pass that was high but catchable that went through a receiver's hands.

The pass below was thrown slightly late and slightly behind the receiver, Charles Johnson, but it went for a first down on a third down situation. Ideally you'd like to see him lead Johnson here but with the cornerback's hips already all the way turned, there's some room for error. 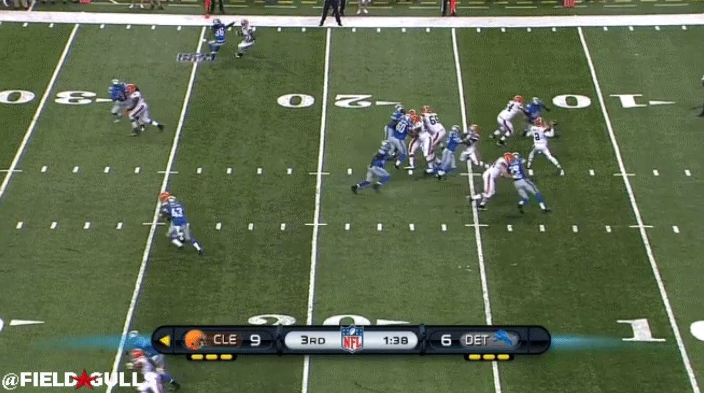 Manziel did not appear to go through any progressions. This may be something that takes a while to master for most NFL quarterbacks, and offensive coordinator Kyle Shanahan ran a pretty simple one-read system with rookie Robert Griffin III in 2012 in Washington. At some point, Manziel will need to prove he can go through his progressions, but right now it's to be expected more or less that the Shanahan offense will be somewhat simplified (and this is something Shanahan said after the game).

More important in my mind was that he threw decisively and with confidence and when his first read was not there he didn't force it. He chose to run a few times, which people may criticize because the potential for hits he'll create, but it wouldn't surprise me if Shanahan and Mike Pettine embrace the playmaker style that made him famous in the first place.

This was on display on a few plays on Saturday. 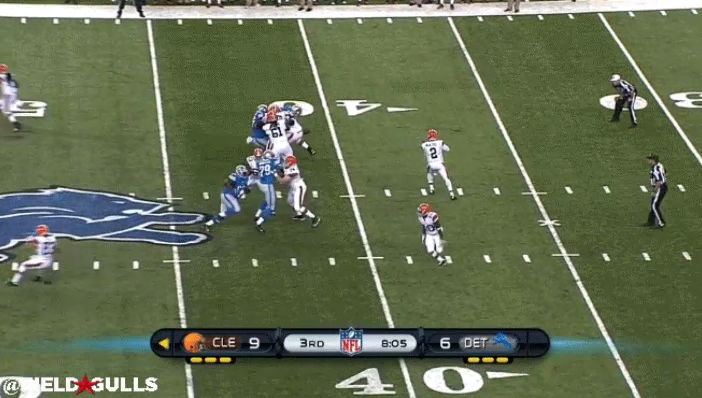 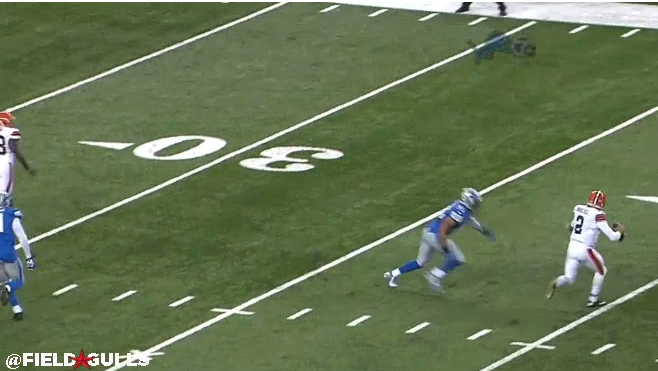 It's clear that Manziel should've lobbed the football to his fullback here but apparently LB Kyle Van Noy's angle of pursuit made Johnny give it a second thought. By that time, it was too late, so Manziel did what he does and ran for a first down.

I did not watch Brian Hoyer's play closely in this one but I think it's fairly clear that the offense the Browns would run under Hoyer would differ from that of Manziel. If Manziel wins the starting position, Shanahan will have a player that can marry some of the concepts of his 2012 Washington Offense together pretty nicely. At a very basic level, Shanahan likes to use the zone blocking scheme up front in concert with the pistol read option run game and the bootleg option. The use of the read option, heavy play-action, and bootlegs, can have the effect of neutralizing an attacking pass rush, and this allows for the quarterback to sit back and take longer shots downfield.

Manziel lined up under center, in the pistol formation, and ran play action from both. It's not a big deal, but when you have quarterbacks coming out of shotgun or pistol spread offenses in college, executing play-action from under center (where you literally turn your back to the defense) can be an adjustment. The footwork or first read didn't seem to be an issue in a small sample size. 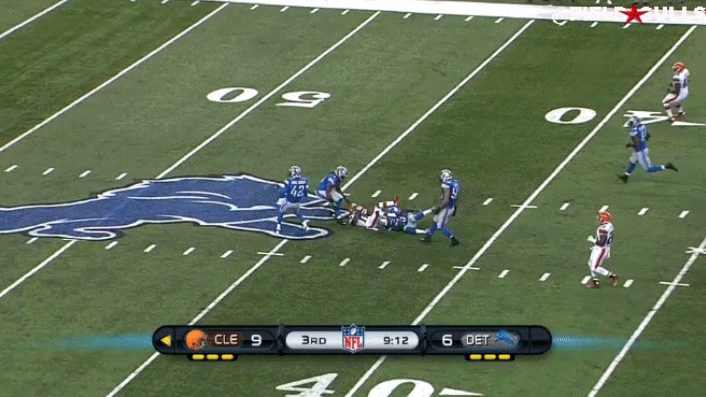 The bootleg is a great partner to the zone running game, and I imagine that the Browns will be near the league lead in play-action and bootleg frequency if Manziel wins the starting job.

Johnny Football had one throw that I thought was impressive — bootlegging left, across his body, he found his receiver at the sideline for what looked to be a first down. It was ruled out of bounds when the receiver did not get his second foot down, but you can't ask for much better of a throw to be honest. 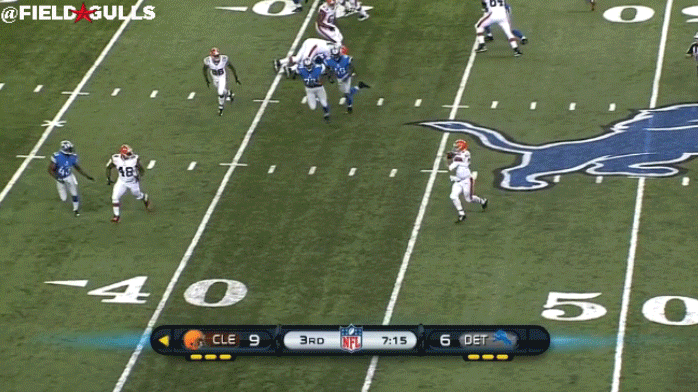 Like it or not, I would guess that the read option will be a feature in the Shanahan offense if Manziel is taking snaps. Manziel's first try at it was an abject failure. 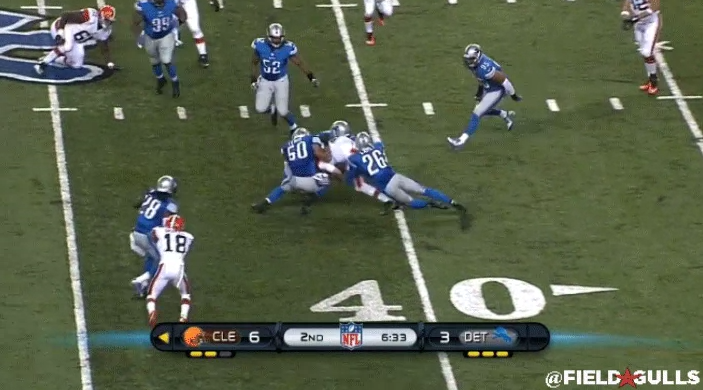 However, his second attempt in the read option was as smooth as butter. 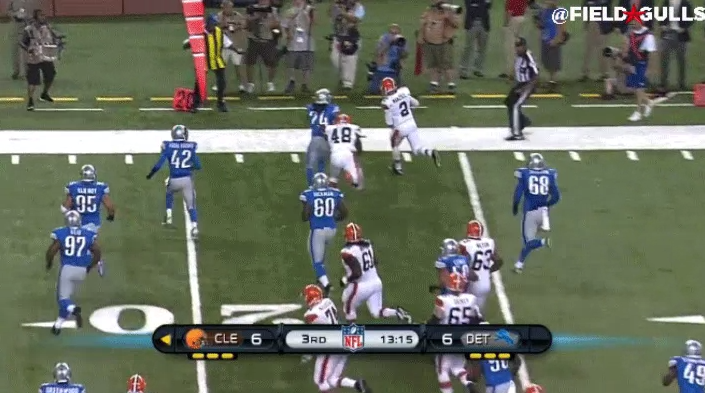 We have here a small sample size taken from one short stint in the middle of the Browns' first preseason game, so drawing sweeping conclusions from Manziel's first action would be, well, dumb. That said, I came away more impressed than I thought I would be, quite honestly, and there is a report now out of Cleveland (denied by Mike Pettine) that Manziel impressed the coaching staff enough to jump out into the lead in the quarterback competition. Perhaps, perhaps not.

While it wouldn't surprise me if this report was based on real conversations, it's clear that the situation is fluid. Manziel will need to do more for the next few games to hold on to any potential lead he's taken in the race, and he'll get his chance on national television (ESPN) next Monday, Aug. 18.