The Broncos kicker can return in Week 6 against the Jets.

Denver Broncos kicker Matt Prater has been suspended for the first four games of the NFL season after violating the league's substance abuse policy, according to The Denver Post. The issue at hand here is alcohol, not performance-enhancing drugs.

What did Prater do to earn the suspension? He was guilty of drinking a couple beers at home while on vacation, according to his attorney. Prater has been in the league's alcohol program since he was charged with a DUI in 2011. The NFL reportedly wanted to suspend the kicker for a full season before settling for four games.

The NFL's substance abuse policy says "the use of alcohol may be prohibited for individual players in certain situations where clinically indicated in accordance with the terms of this Policy." Here's a look at the section about alcohol-related offenses: 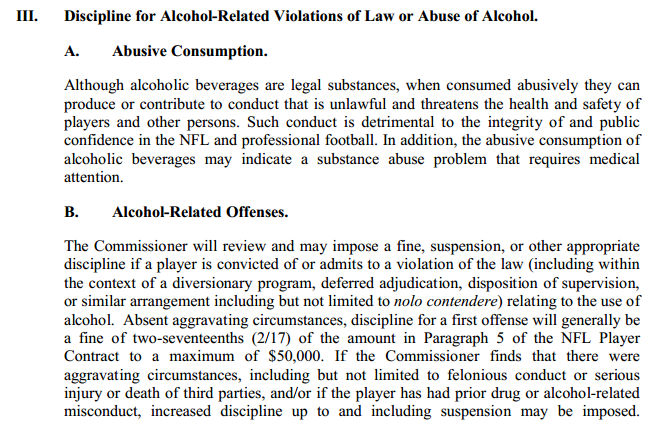 The Broncos open their season with home games against the Colts and Chiefs before going to Seattle in a Super Bowl rematch to face the Seahawks in Week 3. The Broncos have a bye in Week 4 and host Arizona a week later. Prater will be eligible to return in Week 6 against the New York Jets.

Prater has been one of the league's top kickers for the last five seasons. He has only failed to convert higher than 80 percent of his kicks once over that span. Last season was the best year of Prater's career, as the 30-year-old made 25 of 26 field goal attempts.

NFL punishment has been in the spotlight throughout the summer. Prater's suspension comes less than one month after Baltimore Ravens running back Ray Rice was suspended two games for domestic abuse.