The best QBs of the 2000s, according to rap lyrics

The Brady-Manning rivalry doesn't stop on the the field. And what's this, nobody was rapping about Marc Bulger? Ryan Nanni wraps up his important statistical look at the NFL's most #elite quarterbacks, according to rap lyrics.

Share All sharing options for: The best QBs of the 2000s, according to rap lyrics

In last week's 1990s edition of this statistical examination, a new and problematic variable emerged. What happens when quarterbacks (in that case, Brett Favre) start getting mentioned by rappers for reasons having little to nothing to do with their ability on the field? Though Favre's sext misadventures did come up in a few lyrics, it wasn't enough to knock him off the top spot.

That variable is impossible to ignore with our 2000s quarterbacks for one reason; Michael Vick. His past crimes have been referenced over and over and over again, and it would be wrong to let such an ugly incident give Vick an unfair advantage in this measurement. As such, we have elected to keep him out of this list altogether. This is only an attempt to control the data, not a comment on Vick's football career. 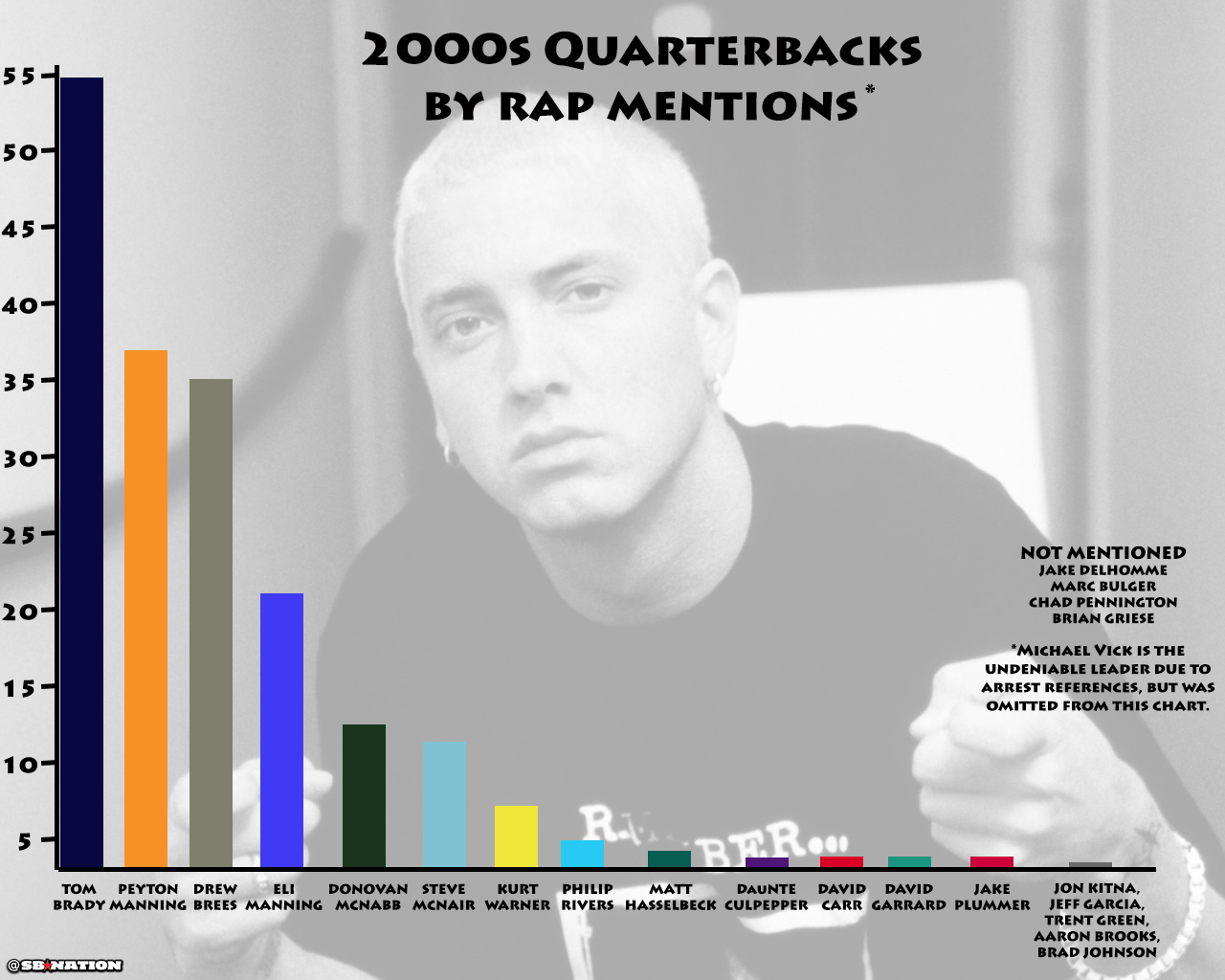 Tom Brady. Championships, supermodels, extravagant fashion; it's easy to see why Tom Brady's life provides such fertile ground for hip hop artists. Of course, it wouldn't be rap without someone taking the opportunity to call out Brady's failings.

I'm big in New York, word to my moms baby
And it's hard to beat a Giant, just ask Tom Brady

Peyton Manning. You would enjoy the NFL's most over-discussed rivalry a hell of a lot more if it featured Brady and Manning beginning each game with a furious freestyle battle. The freestyles would be painfully dorky, but you'd still enjoy it.

Drew Brees. This partially reflects the rise of New Orleans on the rap scene, because, as good as Drew Brees is, there's no way someone who went to Purdue should be this high on the list. Purdue is easily the least hip hop place in the continental United States.

Eli Manning. Eli Manning is only allowed to listen to edited versions of rap songs, and only after he does all his chores.

Donovan McNabb. It's nice to see that rappers are smarter than the rest of us and can recognize the greatness of McNabb's career as a whole. Greatness is more nuanced than simply tallying championships.

QB rating? QBR? Overall record? Super Bowl rings? How can you best measure who the best NFL quarterbacks of the 1980s were? Easy: rap lyrics.

Brett Favre didn't just win a Super Bowl in the 1990s, he was the most rapped about of all NFL quarterbacks. Ryan Nanni runs the stats to see how the QBs stacked up in the 1990s.

Steve McNair. Today, I learned that the University of Florida offered Steve McNair a scholarship out of high school. As a running back. And he, quite reasonably as it turns out, rejected it because he wanted to play quarterback, which he did at Alcorn State, eventually finishing third in the 1994 Heisman vote. I am so retroactively pissed at you, Steve Spurrier, and I demand to live in the alternate timeline where you let Steve McNair be your quarterback.

Kurt Warner. Here is what I imagine a conversation between Kurt Warner and Fabolous, who has name-checked Kurt Warner, would be like:

KURT WARNER: So, you're a rapper?

KURT WARNER: Do you have any good raps about the Parable of the Mustard Seed?

Daunte Culpepper/David Carr/David Garrard. Sometimes a rapper will choose a lesser-known quarterback to reference in order to make the listener think, "hey, Daunte Culpepper! I remember him!" And that's fine, so long as it is used sparingly, which it clearly has been.

Got the stove on my waist, and we cooks
I'm in the way you can't pass like Aaron Brooks