The Lions want to be king of the NFC North. To do that, they'll need guys like Ryan Broyles, Ziggy Ansah and rest of the youth movement to make big contributions in 2014.

Share All sharing options for: Young Lions ready to join the hunt

In this series, I've been breaking down "who" I think those players are, "where" they play, "why" they'll potentially play a key role in 2014 and "how" they'll succeed in that.

On tap today, we have the Detroit Lions.

Who: Broyles was a second-round pick in 2012 after an illustrious career at Oklahoma, despite coming off a torn ACL suffered during his senior season. Broyles then suffered another torn ACL his rookie season, then tore his Achilles tendon last year. Three straight season-ending injuries (one in college, two in the pros) can be a killer to a career and to one's confidence, but reports out of Detroit say Broyles is healthy again and ready to contribute.

Where: The Lions signed free agent Golden Tate this offseason, so the thought is that Broyles will be competing for the No. 3 receiver role for Detroit. That's nothing to sniff at though, considering the Lions' extreme love for throwing the football. With Calvin Johnson and Golden Tate drawing most of the focus of opposing defenses, Broyles will have a great opportunity to see single-coverage.

Why: There is no question as to Broyles talent, but there's the matter of his ability to stay on the field. He has worked hard this offseason to strengthen his legs to reduce the chance of re-injuring either his ACL or Achilles tendon, so this season is his best shot at breaking out. 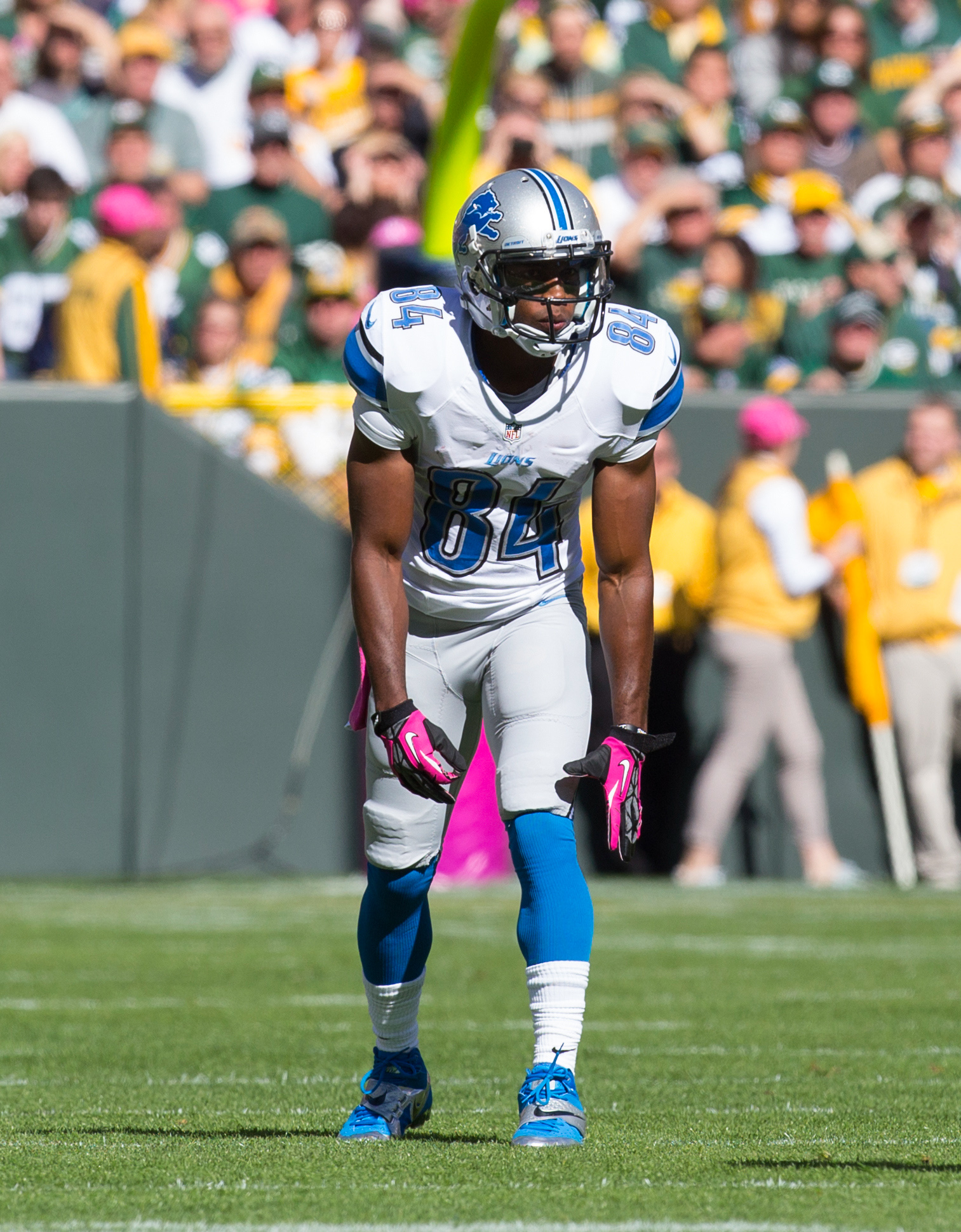 How: It's an easy answer, of course, but Broyles just needs to stay healthy.

Who: Slay was a second-round pick out of Mississippi State in the 2013 Draft. The 6'0, 192-pound corner started four games his rookie year and had 34 tackles and five passes defensed.

Where: Slay is projected to start at cornerback this year for the Lions so he's a pretty integral part of the puzzle on defense. "He's a big part of what we need to do with that position, he has to come along," said Lions coach Jim Caldwell of Slay. "He has talent. We've got a lot of young guys out there, it's going to be a nice competition."

Slay took his rookie bumps last year but reports have the Lions looking to play more man on the outside in 2014, which seems to mesh with his skill set well.

Why: The Lions didn't do a lot to address the cornerback position this offseason in terms of adding veteran talent there after losing Chris Houston, so all eyes on are Slay. He'll have a chance to prove himself and cement his role in Detroit.

"My confidence has skyrocketed," he said recently. "I'm just going out there to compete and win and making sure the guy in front of me doesn't beat me."

Who: Warford was Detroit's third-round pick out of Kentucky and Waddle was an undrafted free agent in 2013. Both broke into the Lions' roster to hold down the right side at guard and tackle, respectively.

Where: Warford started all 16 games at right guard and Waddle broke into the starting lineup in Week 8 at right tackle. Both are expected to win the starting jobs as incumbents at those spots. 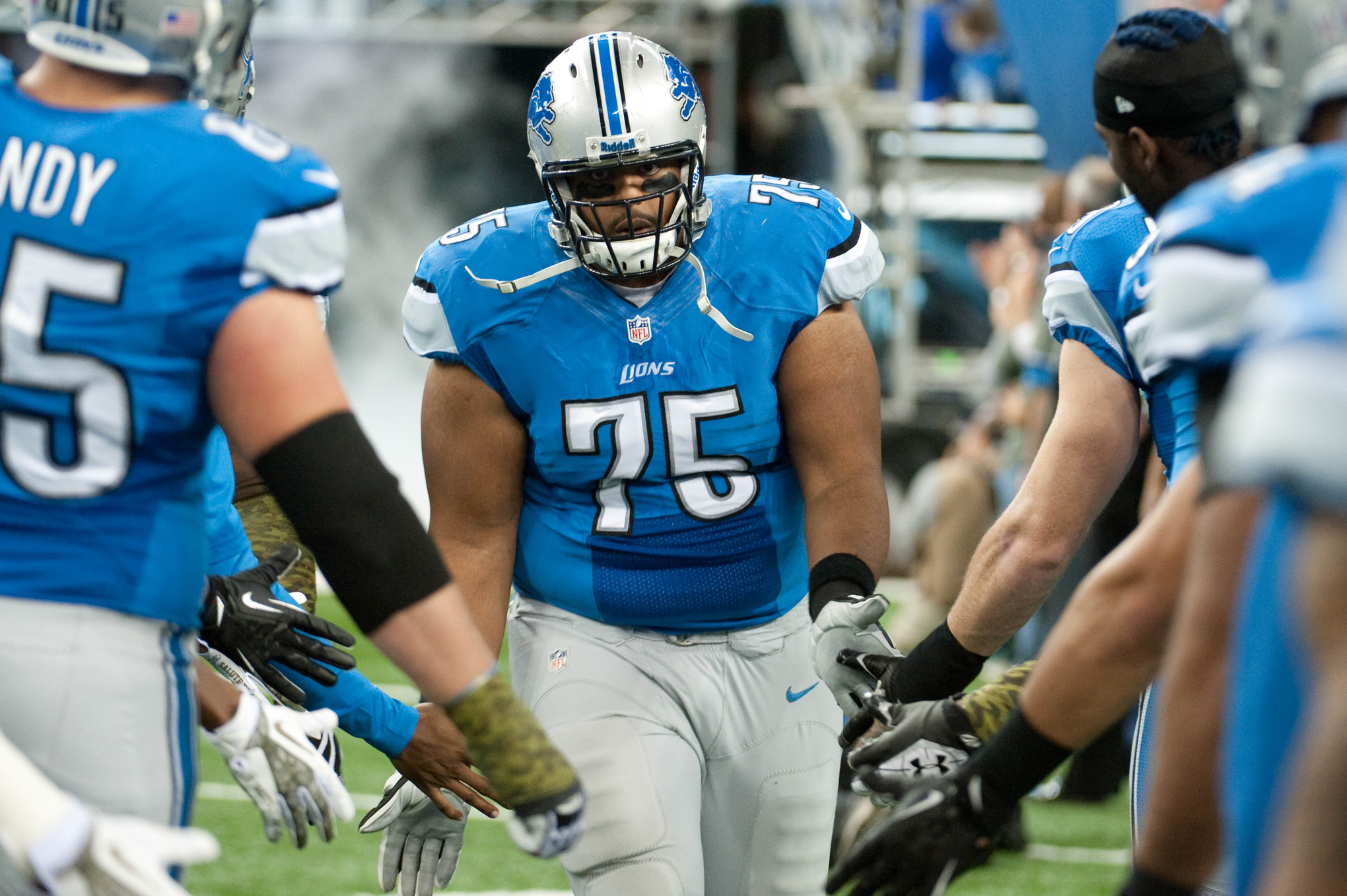 Why: Warford was one of the better guards in the NFL last year even as a rookie, and he has a legitimate chance to break out properly in 2014. Waddle will face some competition from Corey Hilliard at the right tackle spot, but his play was strong enough last year to think he could take a big step this season. If that's true, Detroit will have a very solid right side protecting their franchise quarterback and opening up running lanes for their stable of backs.

How: With most young players, consistency is key, and with Waddle in particular, he'll have to continue to earn the coaching staff's trust on the right side of the line. He has shown some nice chops in pass protection, but rounding out his game as a nasty run blocker will go a long way toward keeping that job.

Who: Ansah came out of BYU to become the fifth overall pick in the 2013 Draft. He appeared in 14 games and grabbed a rookie-best 8.0 sacks (also a team high) before tearing his biceps and injuring his shoulder in December. He's on the recovery path now.

Why: The Lions hope that he can make it back up to full speed and assume the role as their primary pass rusher on the end of the defensive line. They have Devin Taylor as insurance and drafted Larry Webster this year, but Ansah is a special athlete that could develop into one of the league's best pass rushers. As Lions coach Jim Washburn put it, "We're really excited about him, really, that he'll be a real dynamic player, in time. Hopefully, it's sooner than later."

How: The first step is getting healthy, then simply picking up where he left off his rookie year. He'll have to refine his technique and develop a more robust repertoire of pass rush moves, but he has all the tools you'd want at defensive end.

Who: Taylor was a fourth-round pick out of South Carolina in 2013. He had 2.5 sacks and two forced fumbles his rookie year, appearing in 14 games. He's in line to have an expanded role in 2014 as a key rotational player on the Detroit defensive line.

Where: Taylor is a left defensive end primarily, where he'll be competing with Jason Jones for snaps. But he's also athletic enough to spell Ziggy Ansah on the right side and perhaps even move inside to rush against guards. At 6'7, 267 pounds with very good speed and agility, Taylor could carve out a role as a rotational pass rusher and get more snaps this year.

Why: Multiplicity on the defensive line is all the rage these days, and teams have proven that they can rush their players from different angles and different spots on the line with great success. One good example of this would be Seattle's Michael Bennett last year, and I see Taylor as the same type of player. His role as a primary backup and sub-package pass rusher could mean a breakout season in 2014. 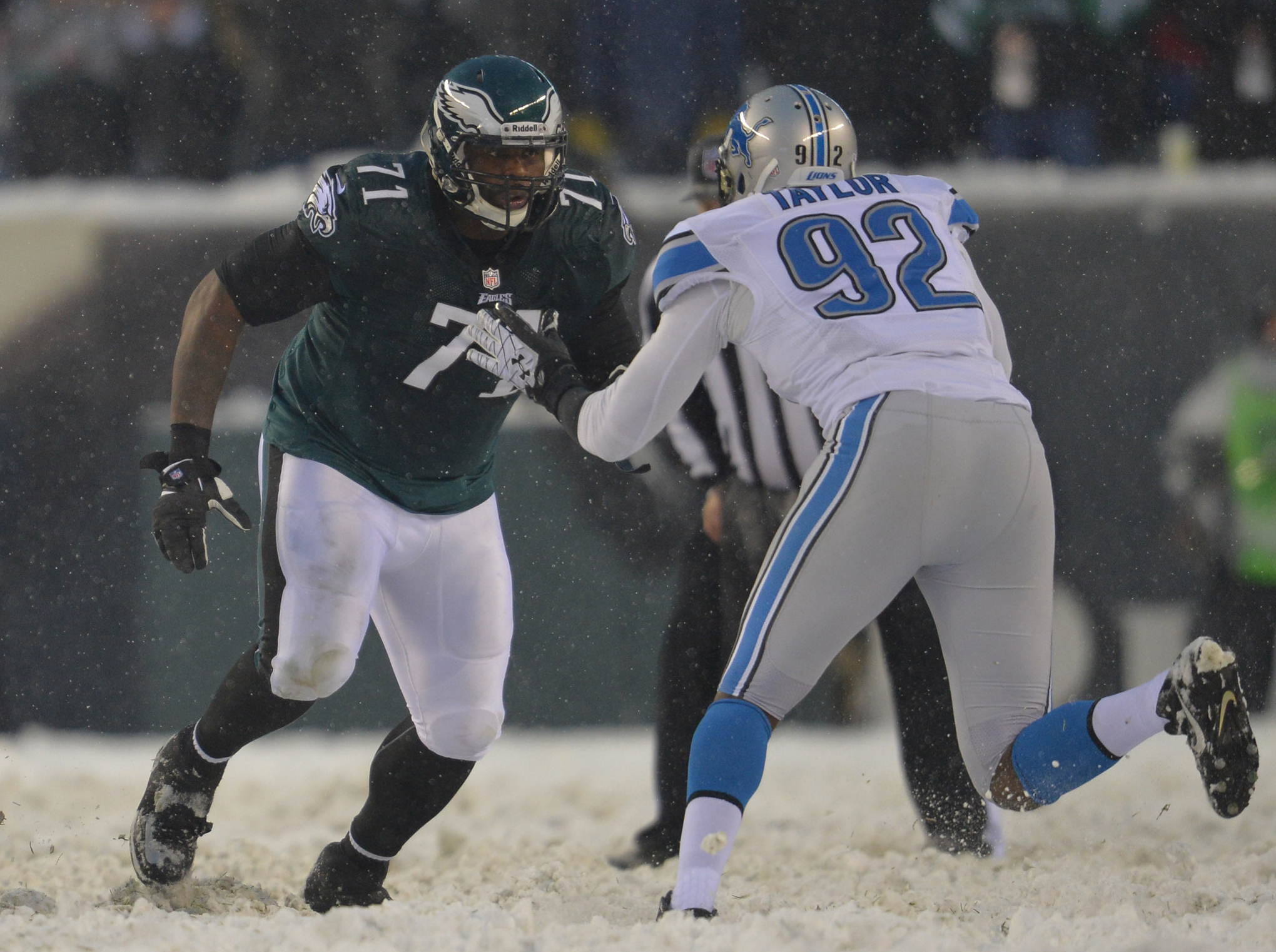 How: Plain and simple: be disruptive.

Who: Fauria was an undrafted free agent out of UCLA in 2013, and he broke onto the scene in Detroit as a formidable red-zone target. The 6'7, 255 pound tight end caught 18 passes his rookie season, but seven of them were touchdowns.

Where: The Lions are pretty deep at tight end with Brandon Pettigrew and newcomer Eric Ebron both in the mix, but Fauria proved to be a valuable weapon for Matt Stafford last year. I wouldn't be surprised to see the Lions lean on Fauria some while they get Ebron, their first-rounder in 2014, up to speed. Using them on the field at the same time would be pretty damn interesting, too. 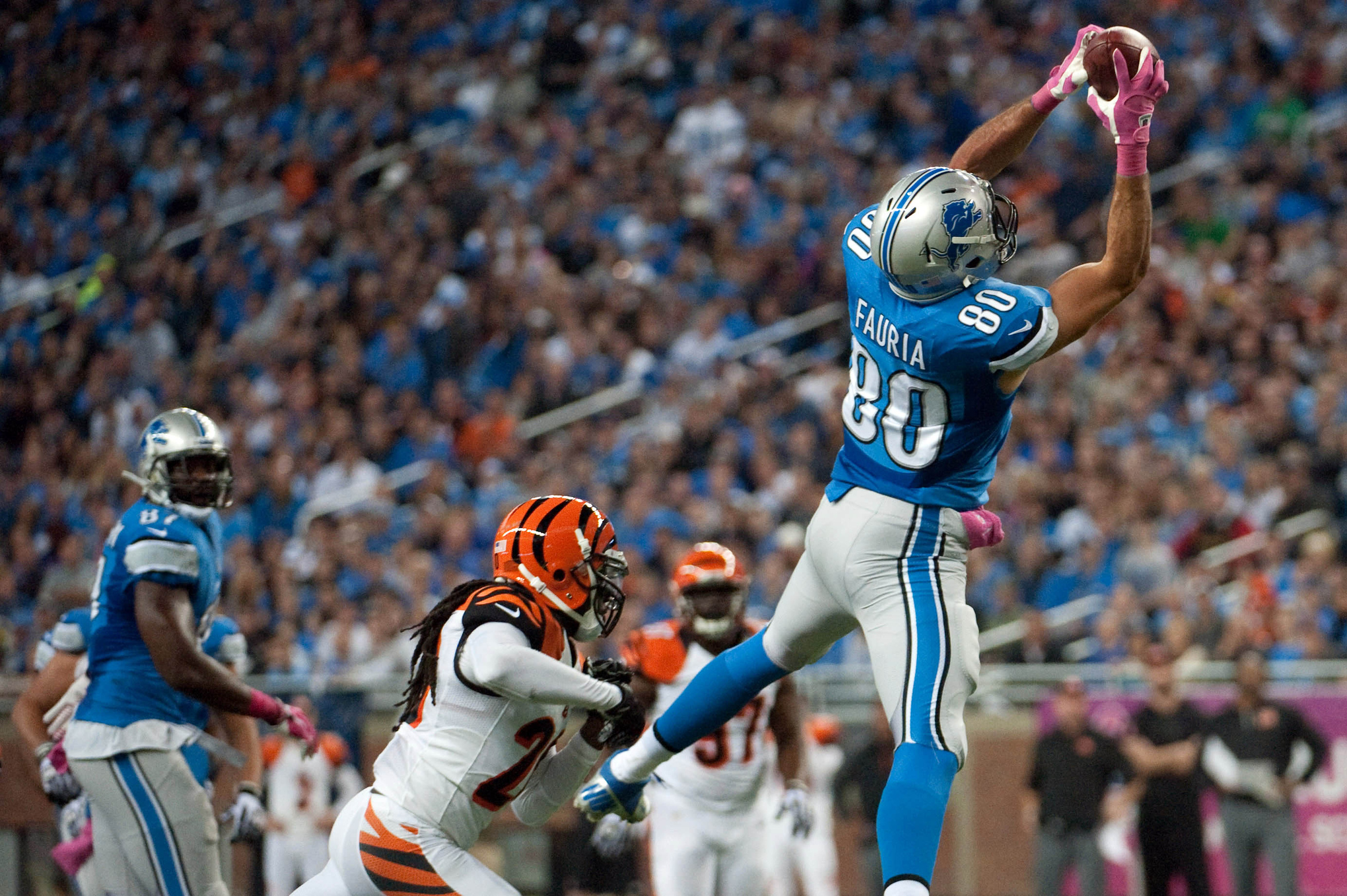 Why: It's always dicey depending on a rookie to play a major contributing role, even if he's a first-round pick, so having Fauria in there to run as a move tight end is a nice luxury for Detroit. I'm guessing that eventually, Ebron will play a bigger role than Fauria and the latter may take on more of a situational role, but there's no denying Fauria's effectiveness in the red zone. Not many guys his size can move and catch the ball.

How: Keep catching touchdowns at an absurd rate.