NFL Week 2 injury report: Reading the diagnosis on A.J. Green, RG3 and others

The second Sunday of the NFL season featured a long list of injured superstars. SB Nation's medical expert Dr. Ali Mohamadi checks in with the latest on RG3, A.J. Green, Jamaal Charles and others.

Share All sharing options for: NFL Week 2 injury report: Reading the diagnosis on A.J. Green, RG3 and others

Here’s one word to describe the injury picture from Week 2 in the NFL: Carnage. With Robert Griffin III, Jamaal Charles, A.J. Green and more, a number of star players suffered injuries that, in some cases, could mark the end of their seasons.

The hits just keep on coming for RG3, whose season is in jeopardy after dislocating his left ankle in the first quarter of Sunday's 41-10 win over Jacksonville. (Update: Griffin out with dislocated ankle, timetable uncertain.) The third-year quarterback suffered the injury when rolling out of the pocket on a pass play. After slipping out of a tackle, he landed awkwardly on his ankle and threw the ball before crumpling on the sideline. Griffin was finally fully healthy after tearing his ACL in Jan. 2013, an injury that caused him to struggle through last year’s campaign.

A report by The Washington Post claims Griffin's injury provides the head coach a convenient excuse for making a change at quarterback.

The tibia, fibula, and talus bones make up the ankle joint, which is bound together by the joint capsule and surrounding ligaments. An ankle dislocation takes place when enough force is placed on the joint to cause the bones to slip out of alignment, causing what is typically an extremely stable joint to lose stability entirely, not to mention a great deal of pain and swelling. This is associated with tearing of the ligaments that hold the bones in place. Dislocated ankles are most commonly associated with fractures of the ankle bones as well.

Team officials have not offered a timetable for recovery, and are waiting for an MRI on Monday to determine the amount of damage to the ligaments and whether there were bone fractures. Significant ligament injury often requires surgery to stabilize the joint and prevent future dislocations. Surgery is usually followed by six to eight weeks of non-weight bearing and another eight to 12 weeks of physical therapy and rehabilitation. That puts the typical recovery period at anywhere between four to six months, which would almost certainly end Griffin’s 2014 campaign. If further tests indicate a lesser degree of injury, the recovery could be shorter.

Either way, Washington fans should steel themselves for the possibility that Kirk Cousins, who acquitted himself well in relief on Sunday, may quarterback the team for the rest of the season.

Charles, Kansas City's star running back and the top overall pick in many fantasy football leagues, left Sunday’s loss to the Broncos with an ankle injury and didn’t return to action. Following the game, Andy Reid described it as an ankle sprain, although it is unclear whether it's a low or high ankle sprain, nor did he discuss the severity of the injury. Both distinctions affect the timeframe for recovery. Charles is scheduled for an MRI on Monday morning to help establish a diagnosis. In the meantime, backup Knile Davis will prepare for more carries next week when the Chiefs take on the Dolphins. 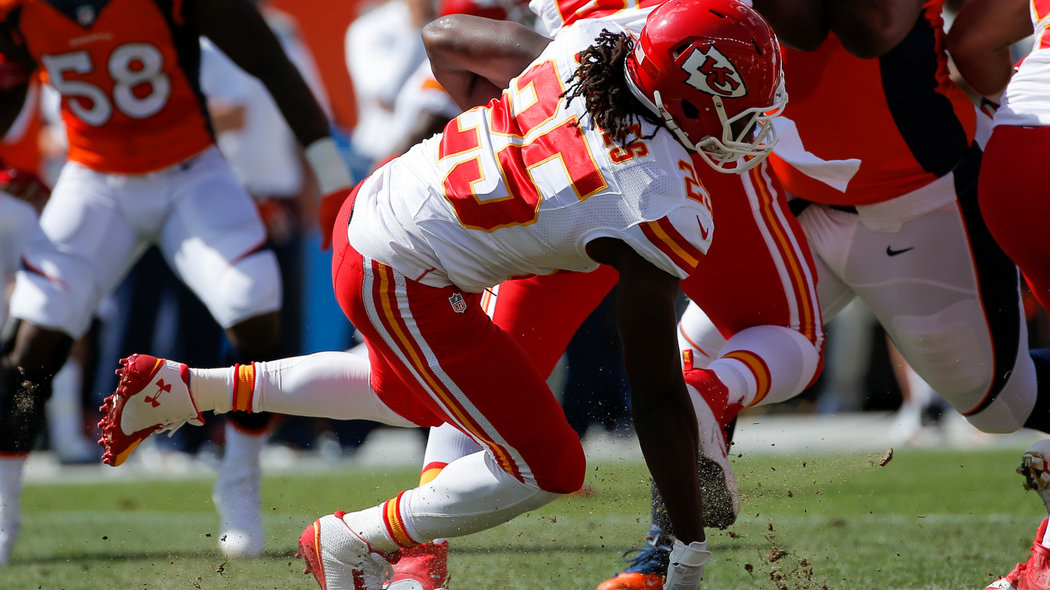 The oft-injured San Diego running back was carted off the field in the second half of his team’s 30-21 upset win over Seattle with a knee injury that has been diagnosed as an MCL sprain.

Early reports indicate that Mathews will miss approximately two to four weeks of action, meaning that the severity is on the lower end of the spectrum. In his absence, backup Ronnie Brown is likely to see increased action at RB for the Chargers, beginning next week against Buffalo.

The Dolphins starting running back suffered a dislocated left elbow in the loss to Buffalo, and he may miss up to eight weeks as a result. The injury took place on a hit by Bills linebacker Nigel Bradham, causing the joint to bend awkwardly and in the wrong direction. In at least 15 percent of cases, elbow dislocations may be associated with nerve injuries that can result in long-term damage without prompt treatment, which includes reduction of the joint (putting the bones back in place, either manually or surgically). Furthermore, compartment syndrome, a condition in which pressure from swelling or internal bleeding results in severe pain or decreased blood flow, may develop in the forearm or biceps requiring emergency surgery.

In Moreno’s absence, former starter Lamar Miller will take over at RB for the Dolphins, starting next week against Kansas City.

NFL Week 2 scoreboard What we learned Sunday in the NFL

Austin left in the first quarter of a comeback win over Tampa Bay with a right knee injury and did not return. The injury took place when he was hit by Bucs safety Mark Barron. The impact twisted his planted right leg at the knee awkwardly. The Rams have not provided information regarding the severity of the injury to this point, but if Austin misses time, it would adversely affect both the team’s receivers and its return game.

The Bengals’ star receiver left early in Sunday’s 24-10 win over Atlanta with a toe injury and did not return to action. Green had missed a day of practice last week due to a foot injury, and it is unclear whether this new injury is related. Although an MRI following the game was negative for a fracture, one possibility is turf toe, which is technically a joint sprain that can result in significant pain and limited range of motion, keeping an athlete out for weeks. This would mean missing next week’s contest against Tennessee at least.

Just to add to Washington’s injury woes, the speedster went down after landing on his left shoulder while attempting to haul in a long pass from Cousins. He was pulled from the game with a shoulder sprain. Jackson injured the AC joint of the shoulder, which is where the clavicle (collarbone) meets the shoulder blade.

After Washington’s win yesterday, Jay Gruden described Jackson as being day-to-day in terms of his prognosis, leaving the door open for the former Eagle to recover in time for his highly-anticipated return to the City of Brotherly Love next Sunday.

Adding to the list of ankle injuries on Sunday, the 49ers tight end left Sunday night's loss to Chicago after his foot bent awkwardly on a hit by Bears linebacker Jon Bostic. The preliminary diagnosis was a sprain. Davis exited the stadium on crutches. He is set for an MRI on Monday to determine the extent of his injury and a prognosis for recovery. Third-string tight end Derek Carrier saw the majority of the action following Davis's injury. Backup Vance McDonald had already left the game in the first half with a knee ailment.