The MMBM: Rise of the lunch pail players

It was a rough Sunday in the NFL, with stars like RG3, Ryan Mathews and others getting hurt. PFT Commenter celebrates the lunch pail players who took over.

Share All sharing options for: The MMBM: Rise of the lunch pail players

Wellcome to the Monday Morning BM,, just a word of warning your probably not prepared to handle the strong football takes and barrelfire NFL truths that you never knew your Mondays were missing. This column is written for and by a REAL fan of the NFL. Its designed to be read on your Monday Morning commode break after a long Sunday eating bad-for-you food and drinking beers. If you care more about SPELLING then you do about TELLING theres the door because this columns not for you. 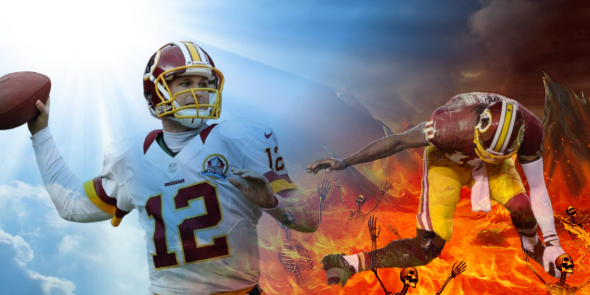 Funny how it took a traditonal pocket passer to put the Redskins back in the running. In todays edition of "no shit weekly" it has been confirmed that Kirk Cousin's is a great Elite quarterback who was basically engineered to run Jay Grudens potent Dalton-Coast offense, which is all but a nail in the coffin of the read option offense. Having a QB whose able to run the ball with olympian speed is a distraction from a cleancut passing attack whose limits are unknown.

This has pretty much been the worse week in NFL history besides every ProBowl week.

Nothing against Abraham Lincoln but starting this American Cousins should of been as plain as a hole in the head- now thats a play that everyone would enjoy. More on Cousins later but this is the feel good story of the weekend for a league that desprately needed one.

This has pretty much been the worse week in NFL history besides every ProBowl week. It was bookended by assault alegations against two of its more popular players from 2011. The NFL was desprate to make the controversy go away any way it could. NFL fans were begining to question why they loved this game in a way theyd never done before except when Terrell Owens did too many touchdown dances.

Well Ive got some good news for the NFL: Injurys are back!

Within the span of like 8 hours we saw IR-G3, Pay J Green, Noskill Moreno, Gerald McCoy, and Jamal Charles all get either hurt or injured but the biggest news was the injury to Ryan Mathews opening the door for Danny Woodhead and Kirk Cousins to reclaim starting positions.

This led Skip Bayless and numerous other pundits to refer to him as "Ryan Matthews" but thats a incorrect spelling of his name. People forget that theres only one T in Mathews last name because Kermit is sipping the other T: 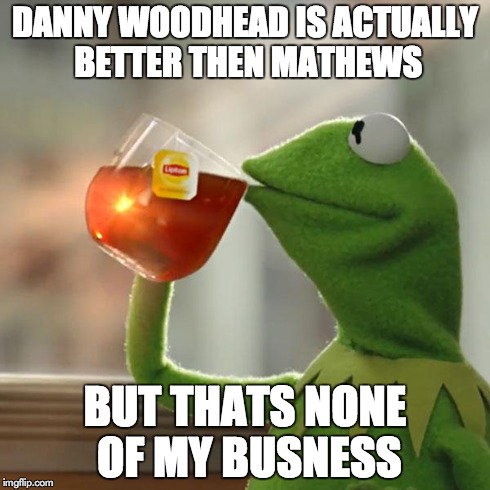 The league that was in so much trouble just a few hours before had rightfully reclaimed its positon atop the American sports landscape as it left a trail of its own selfish players either faking, or being seriously injured in its wake. I wasnt watching the redzone channel folks,, I was watching the RedCross channel! 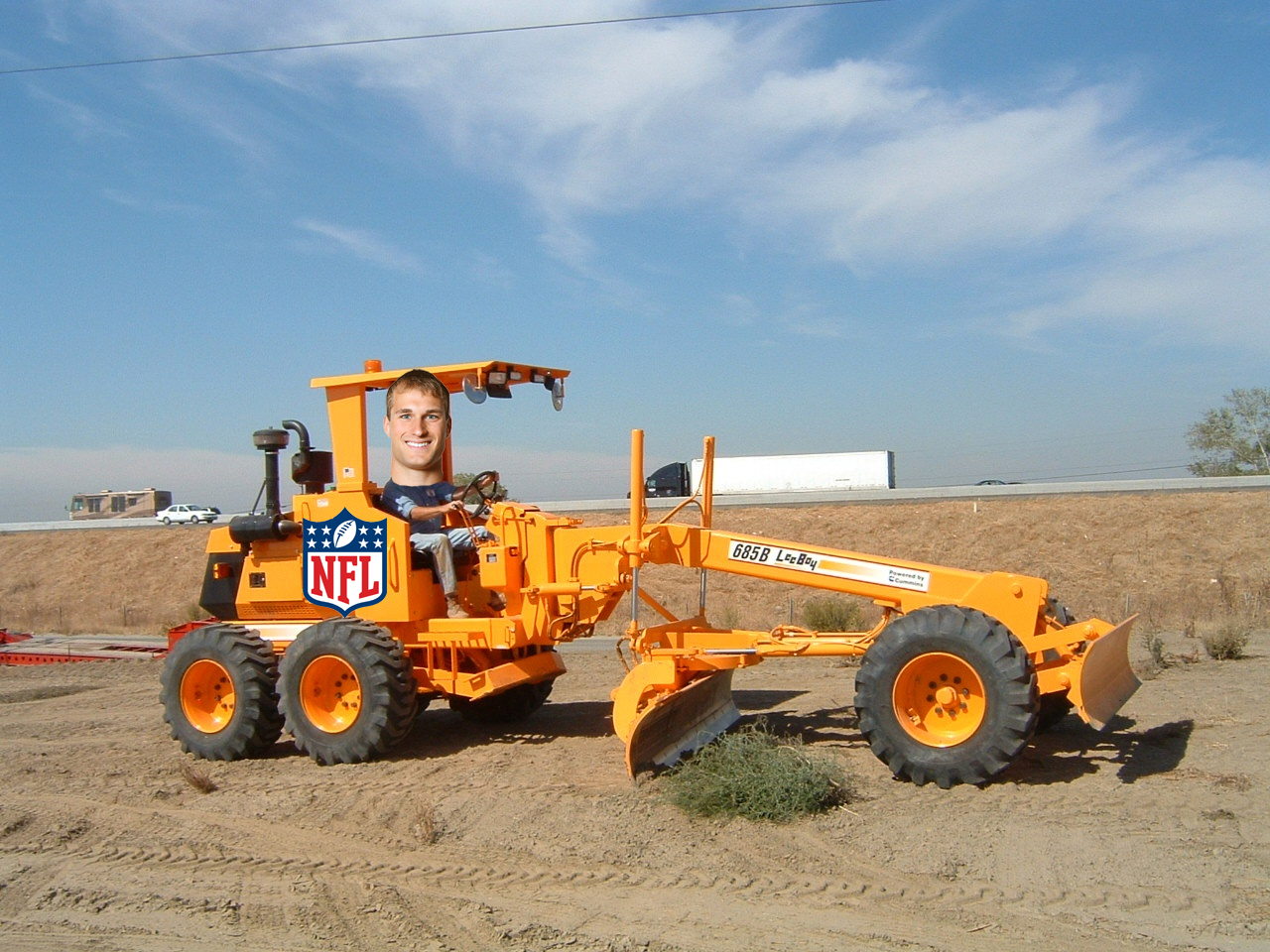 A little factoidish nugget is that Kirk Cousins changed his jersey in the offseason. We all knew he was a bluecollar guy who didnt mind putting in overtime, but now Im going to start calling Cousins "The Graveyard Shift"  because he went from 12-8.

I feel like I need to address the honorable mention here because this award could of gone one of two ways- last weeks winner JJ Watt put up a nother amazing week and even scored a Mike Vrabel-like TD but it was against the Raiders so technically it was a bye week and he is ineligble for any awards. Watt didnt even show off by spiking his TD catch or anything,, he tossed the ball to the ref and got ready to go to work on D.

Fan of the week: The Guy whose using GoFundMe to raise money to buy a NFL team just so he can hire Tim Tebow as the QB 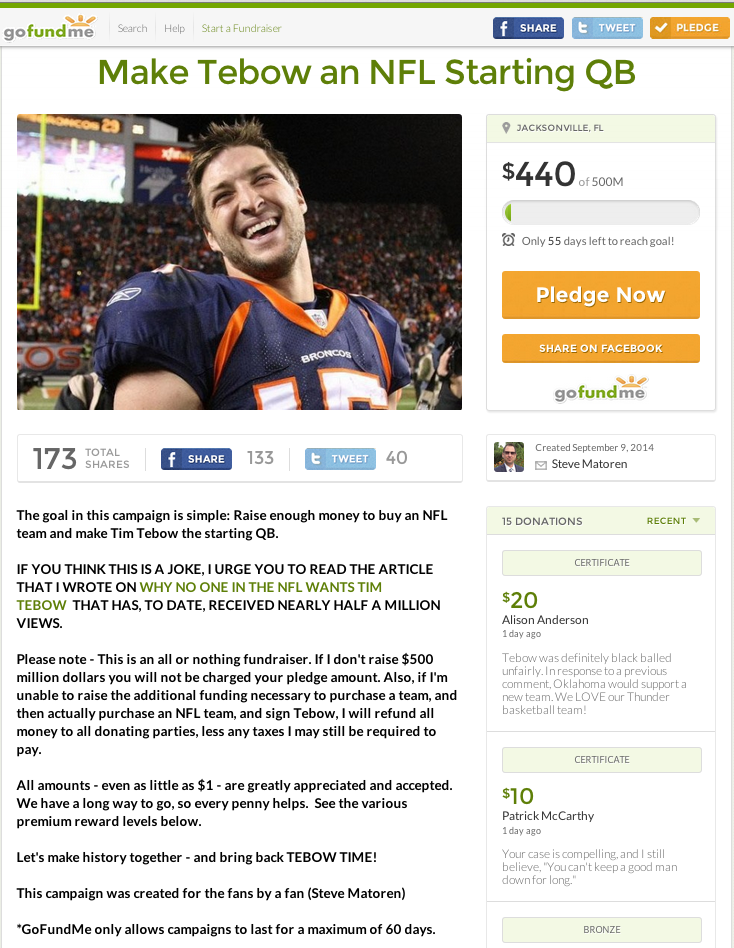 First of all I like this guys dedicaton. Second- his GoFundMe is only for $500 million dollars so I guess hes planning on buying the Titans? There are several different donation levels and the highest level (he named it the "Elite" level of course) is $10,000 so he only needs 50,000 people to give ten grand and he'll make it.

It has been my contenton that Joe Flacco is whats known as Baldingers Cat- both Elite and Not Elite at the same time. Each week MMBM will track Joe Flaccos performence in order to determine once and for all the answer to the unanserable NFL debate: Is Joe Flacco a Elite NFL quarterback?

This was a banner week for media finally adressing whether or not Joe Flacco is a Elite Qauterback. Just check out CBS' Thursday night pregame show with Linebacker/possible Juggalo Bart Scott (CANT WAIT (Bart Scott voice)):

You talk about damning with faint praise folks,, hes "more Elite then Matt Ryan" - Ryans a guy whose never won a playoff game much less a superbowl. Technicaly Im more elite then Matt Ryan. The guys nicknamed after the cheapest beer in the world meanwhile Flaccos a fine Italian Red:

Take all this into account and mix in a bigtime Ravens win against Ben Roethlisberger and Joe Flaccos rating comes in at "semi-elite." 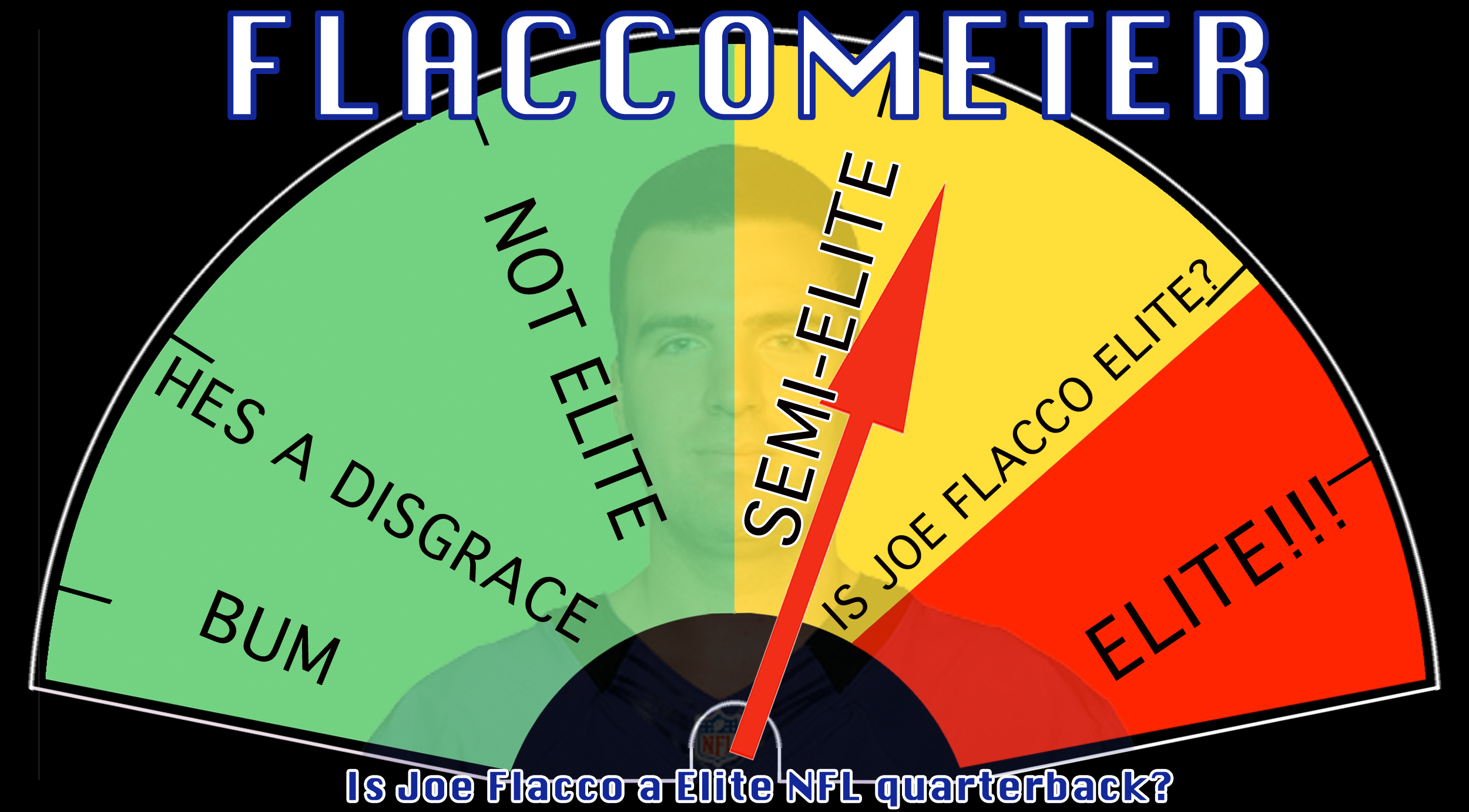 Heres some cool fanart from Pete Bishop who agrees that JJ Watt look's like a bully from a MxPx album cover: 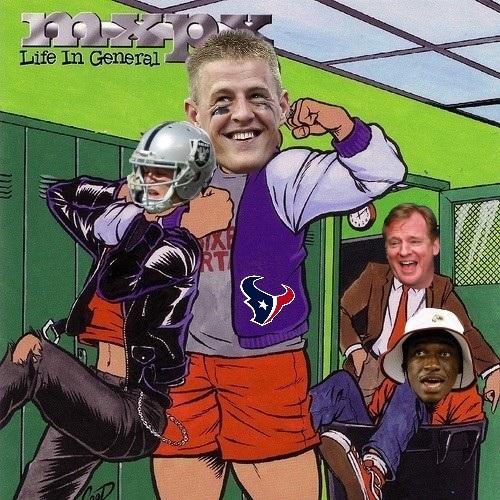 Its a battle of Chip verse Chuck and Im going to go with the guy whose offense isnt comprised of telling his players what play to run by holding up posterboards that look like Tigerbeat magazine. The Colts have allways been ones to use strange motivatonal tricks and now that Jim Irsay was racially profiled for being a billionaire with a sack of cash, fistfull of Oxy, and his car driving 7 mph on a median, I expect Andrew Luck to come out and win one for his embattled owner.

What to look for next week: 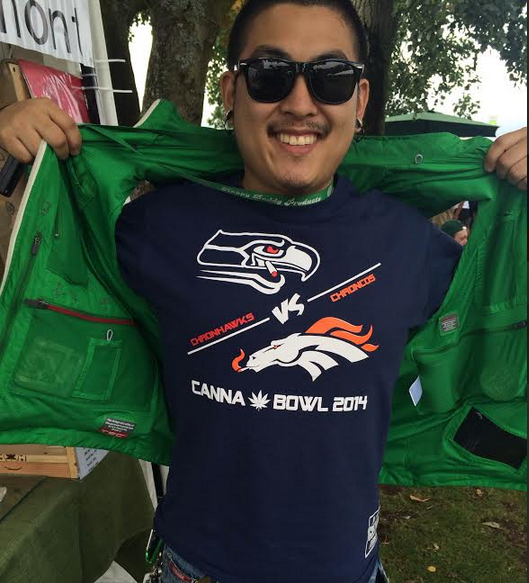 Thats right we've got a matchup of the Super "Bowl" allready (Get it?). Seattles looking to rebound after going 0-1 against the Broncos this season incuding the preseason. Peyton Manning would rather have his recevers dropping meth and molly then dropping passes against the Legion of Choom,, and he'll need Wes Welker White to Break Bad all over the Seahawks secondary.

One things for sure when these two teams get together- there fans are more concerned with diagraming there pregame strategy to read puff puff pass then run run pass. (Get it?)

Have a great week folks and as allways email me at pftcommenter@gmail.com with feedback,, strongtakes, and if your a babe with nudes not to be disrespectful.