An important review of the least essential rap album of our era.

The year was 1990,, give or take I dont remember, when I went to Panma city beach for the first time to catch a vacation hang with my older cousin Travis. Travies was spending his summer selling bicycle salvia to teenager's down on the main drag so we could buy reebok pumps, take the airsacks out, and feed them to seagulls. Pretty much the best summer ever. I was aimless kid without any careeer aspiratons like I have now, but I did know that when I grew up I wanted to be a NFL fan. Travis was a Florida State Semenole fan and I just kind of liked the pro stuff but I respected his heritage of doing the Tomohawk Chop all the time and like before dinner and stuff. The most vivid memory was him telling me how much he liked watching a kid named Deion Sanders play, and how much he would of hated him if he had happened to play for Florida.

Now today is a important Friday for Southern rap music and sports bloggers (i call it cRap music as a joke.) Alot of people like (B.E.T.)SPN's Bomani Jones and S(B.E.T.) Nations Spencer Hall are gearing up for a weekend spent listning to "Outkast" doing performances of there hits like "Idlewild" and I dont know like Andre 3000 singing a medly of deep cuts from "The Love Below" probably at some live show in Atlanta.

But people forget that before southern rap heros like Outkast and Stitches, there was a original King of Hip Hop in the South:

His name was Deion Sanders. 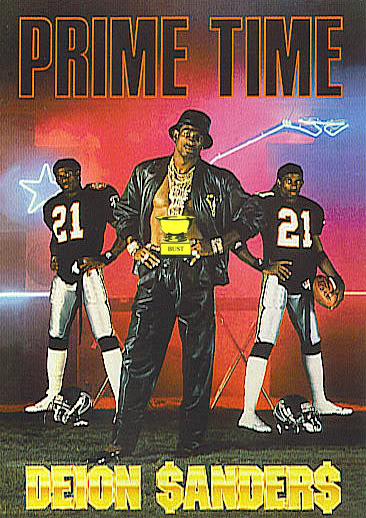 It was ironic that this album was sold in record stores because if you wanted to carry it on your shelfs you needed to hire several return specialists to handle all the people who we're going 2 bring it back.

I stole mine it was my first time stealing things but the way I saw it technicaly the store was stealing from me because they were going to take my money- cant have it both ways thats a double standard. So I tucked it into my Jncos and pretended like I peed my pants so securty didnt pat me down when I set the alarm off.

The artwork prominently featured clock's on it because Deion had a tendencey to oversleep and forget what sport he was playing and drive to the wrong ballpark.There were many many times I think that Sanders would show up at the Georga Dome in his baseball trousers or to Fulton County Stadium with his football hemet on. The album was put out on MC Hammers record label and at some point a marketin gperson decided it would be a good thing to have Sanders wear this outfit:

Now dont get me wrong I am a fair guy but Deion Sanders was argulbly the worst attitude in the history of organized sports. He was such a bad influence that every quaterback in the league would avoid going anywhere near his side of the field at all costs.

But lets talk about the music. Usually when I want to review a cornerbacks "record" I just make a request for the county court transripts, but in this case Im actualy talking about a album. It was kindve almost a mix between someone who liked P funk and NWA equally and then took all the worsts parts of those bands and tried to make them mate in a terrereum. Just like his baseball career, Deions single was a obvious error in retrospect. The song was called "Must be the money" and came along with a very 1994 Music video:

The song was kind of a mix of all types of rap considering its lyrics were like if Solja Boy had CTE and it had a beat that can be best desribed as "Thanks but Im going to pass on this one. Timings not right. All the best- Robin Thicke."

Its a great video and a real treat to watch, but for MY money Im more a fan of his non-single stuff like track 14- "Sum'n bout that woman." Now youll recall Deion made a big deal about standing behind Ray Rice after the tape of Rice punching his fiance emerged but lets flash back 2 what Prime had to say in 1994:

"Deion beyond, the Neon lights,

I cant stand any man who abuses his wife

So give respect to the women today

What a finish. You thought "The Road Lest Travelled" had a killer ending line,, well the salute to women space explorers who would go on to do things like fly next to the moon and drive acrossed the country in a diaper to kill a colleague put's Robert Frost shame. Its literaly poetry and its also a strong take that Sanders went from wanting to murder domestic violencers and throwing there bodys out of a moving car to telling people to not talk bad about Ray Rice.

One thing youll notice about Deions CD is that all the songs are about a minute to long and put a suprising last verse in them after you had thought and hoped the song was over which is basicly the musical equivilant of that time he came back to playing for the Baltimore Ravens.

Now if your going to be in a 90s rap band you need to have a abbreviation name for your crew. Deion calls his rap entourage the" Dirty Dog Crew" which he abrevates to the "Double D Crew" just to let you know that ths album was going 2 be a huge bust. In fact,, Deions debut album failed to notch even one hit, just like any of the football games he played in.

There are so many bad songs to choose from by "Y U NV ME?" is a pretty strong example of how much further telling will get you then spelling in this world. Heidy Heidy Hey is what you get when you try to write a rap song when your literally listening to another more famous rap song at the same time, and most of these song's drag on way too long despite the fact hes not very good its allmost like he was warning us that he would try to come back and play for the Baltmore Ravens in 10 years.

His best song IMO is "Prime Time Keeps on Tickin" which is set to the beat of "Fly Like a Eagle" by Steve Miller Band. "Prime time keeps tickin tickin tickin... etc" but considering how he hopped around from town to town becomeing the first athlete in world history to underperform his contracts in multiple sports, he should of sampled "Take the Money and Run."

So although Neon Deions musical career didnt exactly top the charts,, it wasnt all for not. You see his son Deion Sanders Jr. is off to a promissing start. hes literally 100 times the rapper that his dad was.

Dont believe me? Check this out. I dont think Im exaggerating at all when I say this is probly the best rap song and best lip synching of all time (Make sure to blast the absolute hell out of this at youre work computer):