It might be a sneak preview of this year's NFC Championship. At the very least, it's a helluva way to kick off the 2014 NFL season. Danny Kelly digs into the Xs and Os of what to watch for on Thursday night.

The Seahawks and the Packers kick this 2014 NFL season off tonight. While the two teams are not necessarily on the same wavelength in terms of schematic philosophies -- the Packers believe in volume on offense and ran the third-most plays of any team in the NFL last year while the Seahawks ran the fourth-fewest -- I am guessing that both teams will nonetheless try to do some similar things on offense in this one, albeit at different speeds.

A few examples: I believe that both teams will look to spread things out formationally in order to garner -- then attack -- each other's nickel defenses. For the Seahawks, this means running with Marshawn Lynch out of their three-receiver formations to exploit six- and seven-man boxes, and for the Packers, it means running with Eddie Lacy in their three- and four-wide looks.

How to watch the game Seahawks nearly touchdown favorites

Ultimately, maybe Seattle and Green Bay aren't so different after all. Let's take a look at each side's potential game plans.

"A mobile quarterback is the most difficult element to defend in football."

That's from the mouth of Pete Carroll, and I'm guessing he's simultaneously harkening back to the days of USC's heartbreaking national championship defeat to Vince Young's Texas Longhorns but also referencing why he believes his own quarterback, Russell Wilson, is so dangerous. Carroll has long lamented the stresses that mobile quarterbacks put on a defense -- it creates an additional player that the defense has to account for in its gap integrity and assignments --and Aaron Rodgers is that type of quarterback that Carroll will have to prepare for.

Rodgers is known for his cannon arm, but he has highly underrated athletic ability and movement skills as well.

Earl Thomas knows this -- and explains how Seattle plans to combat it.

Earl's explanation of what makes Rodgers so dangerous almost seems to be perfectly referencing the example I'd picked out below for how Rodgers keeps plays alive. As Earl says, he scrambles to his right after hitching up to throw; he keeps his eyes downfield and relies on his excellent corps of receivers to create something for him.

This was from preseason Week 2 in the Packers' first drive of the game. It's easy money.

As Earl says, defenders must play with discipline in knowing where opposing receivers are going and not get stuck peeking into the backfield too quickly. Rodgers, with his compact, quick throwing motion and incredible velocity, will make you pay if you are a step slow.

Watch for this to be a major factor for the Seahawks to defend, and watch for Russell Wilson and the Seahawks' offense to do much of the same.

Says Seahawks nickelback Jeremy Lane of Packers receiver Randall Cobb. Lane is obviously not lacking a smidgen of confidence, much like his teammates in the Legion of Boom, and this will be a major matchup to watch carefully. I'd expect the Packers will attempt to isolate Lane in man coverage in the Seahawks' defense and look to attack him.

Nonetheless, Cobb is dangerous in the slot, and for now I'd be targeting Lane as the weak link in that Seattle secondary. Here's one potential way the Packers could attack Lane and the Seahawks' nickel defense, a scheme they used against the Rams in preseason Week 2. 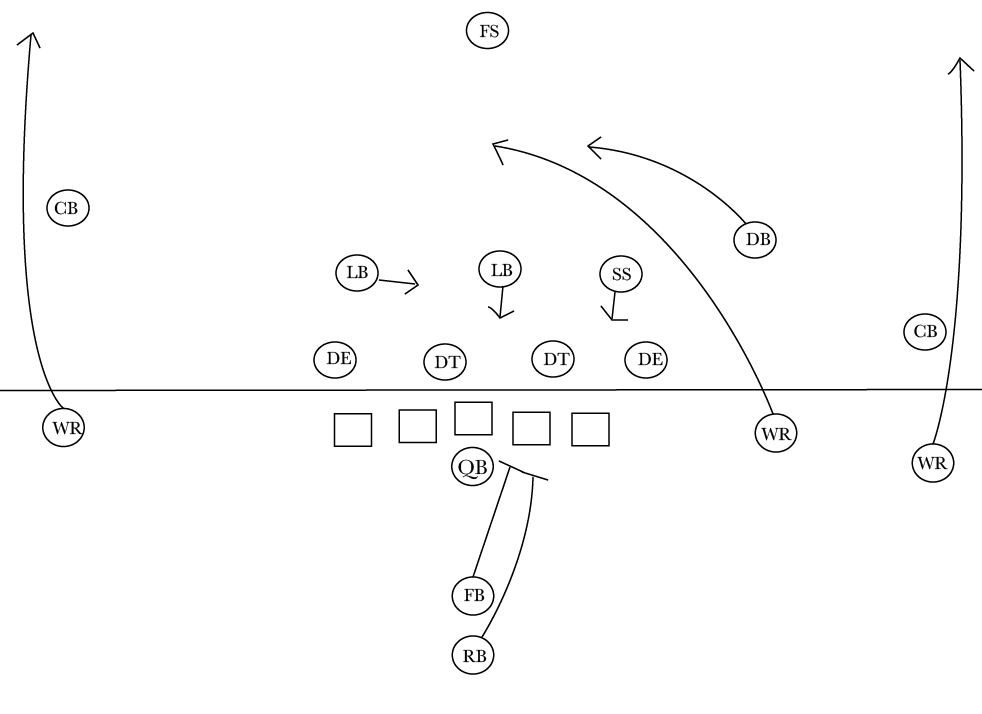 The basic idea behind this play is to use a play-action fake to the running back, from a running formation (typically if there's a fullback on the field, teams will at least consider that a run is coming), suck the linebackers and/or defensive backs at the second level forward, then dump it over their heads. This is exactly what transpired below.

With a big cushion given to Cobb by the nickleback in coverage on this particular set, it's just easy money.

That said, one way to disrupt a bang-bang play like this is to jam at the line and reroute or delay the receiver.

"Oh yeah, that's what we do," Lane said. "We're a press team. I'm definitely going to do that. Definitely getting your hands on him in the beginning. Because a lot of receivers will be successful if you just let them run free and give them time to make a lot of moves. But if you disrupt the timing with the quarterback and the receiver, you should be pretty good."

In theory, he's correct. This is a timing throw that needs to get to Cobb when he's in front of the defensive back and before pressure gets to Rodgers. If Lane can redirect and administer a solid jam at the line in order to slow up or redirect Cobb on his route, this won't be nearly as smooth of an action.

"He definitely can be stopped," Lane said. "Like I said, just put your hands on the guy. Nobody wants to get your hands put on them. If I can disrupt the timing, I'll be OK."

Now, all that said, Seattle does like to play some zone defense underneath with its nickelback, meaning Lane won't be asked to trail Cobb man-to-man the whole time and in some instances he won't be asked to jam. It just depends on what Seahawks defensive coordinator Dan Quinn dials up.

Regardless, though, the Packers will test Seattle's defensive personnel groupings with the no-huddle, hurry-up offense --meaning they won't allow Seattle to substitute new players in once they get a matchup they like -- and they'll prod, poke and jab at any weaknesses they can find.

Earl Thomas talked about how the Seahawks will respond to this as well in his press conference this week:

"It's all about understanding QB intentions for me," said Earl, alluding to the fact that the Seahawks take pride in how much film they watch in order to better recognize routes and formations. "I think the linebackers and the safeties," he continued, should recognize "the hooks, and the weak hooks, and the buzzes, and if you understand how to stay tied on a string with everybody else, and understand where your help is, that's how you play fast."

Understanding what you're doing on defense in relation to your teammates ("stay tied on a string") while at the same time understanding what the offense is trying to do (recognizing route combinations and "QB intentions"). That's how Seattle tries to play.

"Throw to score, run to win"

"We throw to score, and run to win" is an axiom oft-repeated by Seahawks offensive line coach and assistant head coach Tom Cable. The Seahawks' identity is around running the football, and even with their potential to improve in efficiency and explosiveness this season, they want to continue to play with balance. That said, like the Packers, I can see Seattle running out of 3WR formations in order to get a nickel defense in response, which should in theory give the Seahawks more six- and seven-man defensive fronts.

This could be big for Seattle. Let's look at a few of the schemes that it broke out during the preseason.

The foundation of the Seahawks' run game is the outside and inside zone. This outside zone run below was meant to go off of LG James Carpenter, but when the Bears pushed him back on the snap and began flowing to the offensive left, Marshawn Lynch saw a cutback lane and exploited it. In simple terms, this is exactly what you want: Get the defense flowing or overpursuing one way, find a cutback lane to get north-south.

This is a relatively new tool to the Seahawks' offensive toolbox, and it's something they put on tape against the Bears in Week 3 of the preseason. The "pin and pull" concept is pretty simple -- with your tight end and right tackle, "pin" the end and defensive tackle in front of you, then "pull" your right guard and center around to meet any oncoming defenders. 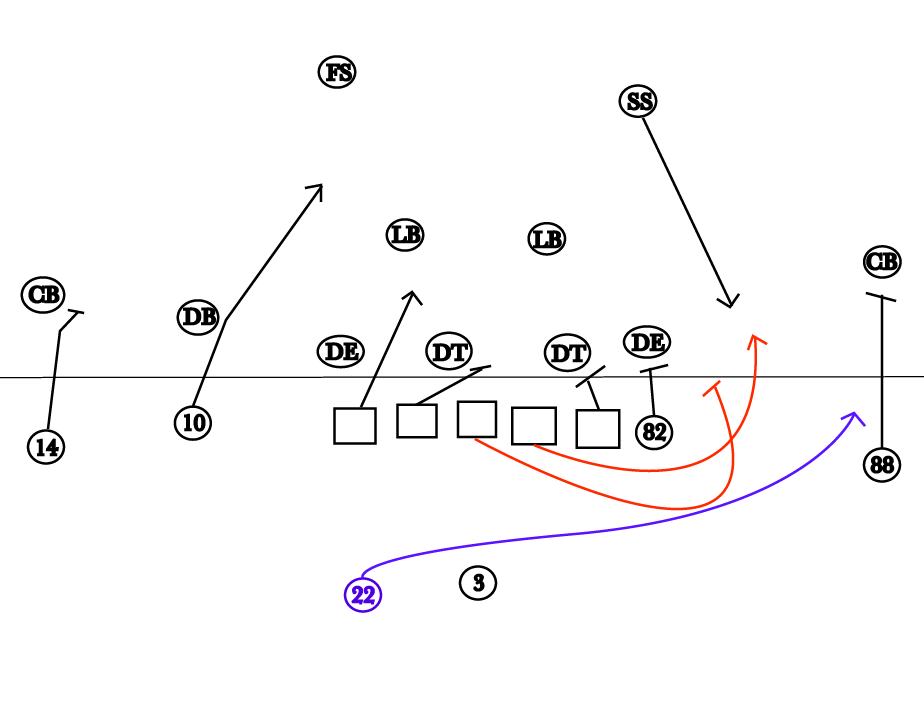 Here's how it looks:

Keep in mind that Christine Michael will be inactive in this game, but Lynch or Robert Turbin would both be capable of running this play to the outside. It's a changeup to Seattle's normal run game, and it's something the team can run from three-receiver formations that garner nickel defenses in response.

This is relatively new to the Seahawks' offensive toolbox as well and it's something that the Packers must prepare for. It's a "packaged play" that has four inherent options every time you line up to snap the football.

1. The read-option handoff: Simple enough, the threat of a Russell Wilson keeper "holds" the defensive end on the bottom of your screen, which allows tight end Zach Miller to move downfield and block a linebacker. The running back dives north-south and hopefully picks up 3-6 yards without much trouble.

2. The keeper: Again, pretty simple. If the defense is selling out to stop the run, that leaves Russell Wilson vs. an outside linebacker in a footrace. If it's Clay Matthews we're talking about, this might not be the matchup they're looking for, but if it's a slower dude? Exploit it.

3. The bubble screen: Look at the GIF above. Imagine Russell Wilson deciding to throw the football to his left to Percy Harvin. Percy Harvin can then do what Percy Harvin does.

4. The play-action pass: Don't hand off, don't keep it. Pretend to hand off, get the defense flowing forward and then throw the football.

Obviously, I've only scratched the surface for each team's plans and schemes and strategies. This game will be, as Richard Sherman called it, "a chess match." There will be many things going on, but in my eyes, these are a few things to watch for when you're kicking back on Thursday night and reveling in the fact that football is back.