Percy Harvin changes everything for the Seahawks

The Super Bowl was just the beginning for Percy Harvin and the Seahawks.

Share All sharing options for: Percy Harvin changes everything for the Seahawks

Percy Harvin didn't put much on tape in 2013 until the Super Bowl. He spent most of the season rehabbing after hip labrum surgery, but we've now had a glimpse of what he can do in this Seahawks' offense. On Thursday night, Offensive Coordinator Darrell Bevell utilized his speed and explosiveness in a variety of ways against the Packers, and it's clear to see that if he can stay healthy, Harvin will be a major factor that every defense has to account for.

Harvin caught all seven of his targets for 59 yards against Green Bay, adding 4 rushes for another 41 yards and another 31 on a kickoff return. That's 131 all purpose yards in the 2014 opener, which is fairly impressive considering Harvin only saw 55 percent of Seattle's offensive snaps as the Seahawks rotated receivers heavily on offense.

The NFL season picked up right where the last one left off, with the Seahawks crushing a quality opponent. This time it was the Packers in a one-sided 36-16 win that has a lot of people feeling just fine about their Super Bowl picks already.

When he was on the field, though, the Packers' defense had to account for him everywhere he went.

The thing that a healthy Harvin brings to the Seattle offense is that he stresses opposing defenses horizontally, which puts a huge strain on their ability to defend the middle of the field against the Marshawn Lynch run. The combination of these two players, along with an efficient Russell Wilson, gives the Seahawks a chance to have an exceptionally dangerous offense this year.

Let's go to the tape to break down a few of the ways Seattle deployed their now-healthy offensive weapon.

Seattle's first play from scrimmage, the Seahawks come out in a "heavy" two tight end set. Zach Miller and Luke Willson are aligned with a "nasty" split off of the line (in tight), and Percy Harvin starts out alongside them before motioning out to the wing.

Russell Wilson receives the snap as Harvin is in motion, and quickly flips it out to his playmaker. On the offensive line, you see five cut blocks -- this is meant to allow Wilson to 1) have an open throwing lane and 2) get Packers defenders on the ground and unable to quickly pursue Harvin on the screen play.

Harvin now has two tight ends lead blocking in front of him with two defenders in his immediate vicinity to beat.

Zach Miller lets nickelback Micah Hyde get a little too close and Hyde gets a hand on Harvin, but the former Florida Gator and Minnesota Viking shrugs it off. It's a modest gain after that, but it's obviously something that could be executed much more efficiently. These quick passes for bubble or tunnel screens are all timing based, and the timing is thrown off when Harvin must evade the first defender.

After Lynch runs for 5 yards on second down, the Hawks are faced with a third-and-one situation.

In this case, it's fairly easy money, as the Packers give the speedy Harvin a big cushion in their zone, instead occupied with the potential for a Lynch run up the middle. Harvin takes the quick screen pass for another 4 yards.

Before the game, I broke down the Seahawks' four-pronged package play that they like to run from their three wide receiver "trips" formation. The four options they had shown in the preseason were 1) a read-option handoff to Lynch, 2) a read option keeper for Wilson, 3) a bubble screen throw to Percy, and 4), a play-action pass by Russell. Turns out that was pretty vanilla, and Seattle added a couple of additional options to this package against Green Bay.

One of them was shown below, as the Seahawks added a Percy Harvin fly sweep element to their play. Prior to the snap, Harvin came in from the wing on a sweep motion, giving Russell Wilson a triple-option type of decision. He can either hand off to Harvin, hand off to Lynch, or keep it himself. 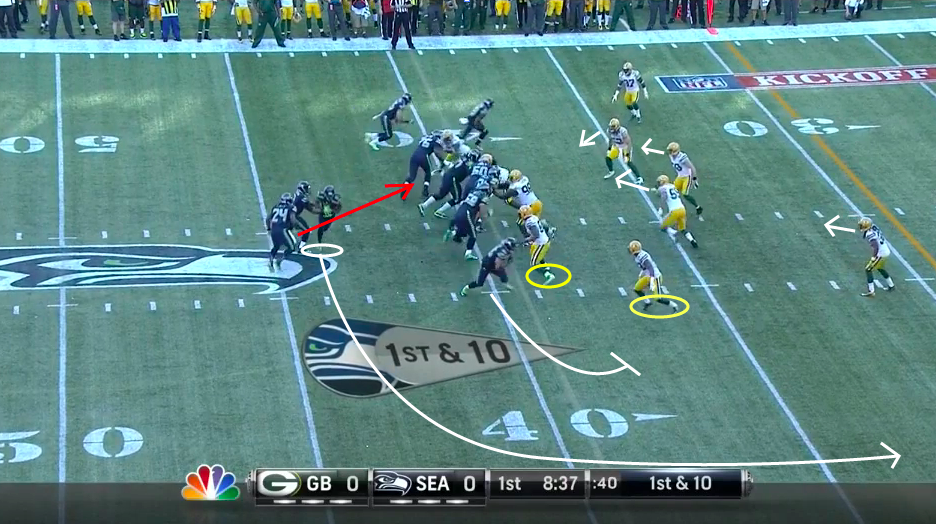 In this case, Wilson hands off to Harvin, who has a full head of steam. The Packers are rightly concerned with the Lynch inside run, and Julius Peppers, the outside linebacker to the playside, apparently blinked when Wilson handed off to Harvin. Peppers doesn't even see where the football is going. See below:

TE Zach Miller does a nice job of blocking on the move and Harvin picks up an easy 13 yards.

The Hawks ran it again in the third Quarter.

Essentially the same play. The threat of the Lynch run draws the OLB and MLB up and out of position, and Harvin heads downhill at full speed. He trips a little, but still picks up 16 yards.

The Hawks would run this identical play again in the 4th Quarter with Harvin taking it down the field about 20 yards, but it was called back due to a questionable hold by Zach Miller blocking on the movie on Clay Matthews.

The outside zone read/stretch play

Harvin did some work as a de facto running back for the Vikings and Darrell Bevell is apparently going to continue with that here in Seattle. The Seahawks come out in a four-receiver set with no running back on the field, and the Packers counter with a dime personnel grouping (six defensive backs). Dime defenses are more susceptible to runs because you're taking some of your bigger bodies and substituting them for defensive backs (the obvious goal is to defend the pass better). So, Seattle just turns Percy into a running back.

Prior to the snap, Harvin motions from the tight slot to the backfield next to Russell Wilson, and takes a read-option handoff going outside. From here, it's a numbers game -- Seattle has eight blockers at the point of attack, and Green Bay only has seven. This is a numbers advantage that offensive coordinators are paid to put together. 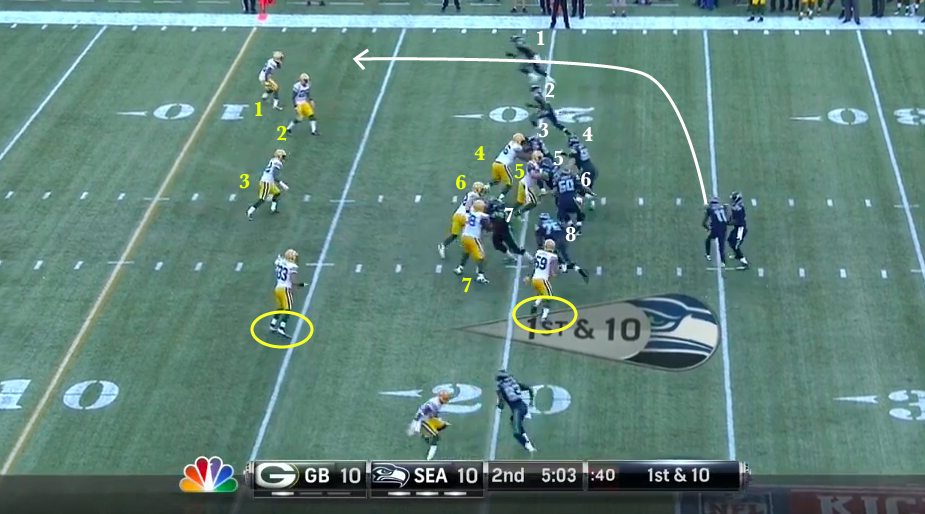 Here's how it looks full speed:

The Packers look to be in a zone defense, and you can see Micah Hyde (#33) realize where the play is going too late to get himself into the play. Clay Matthews (#52) takes a bad angle and Percy beats him around the edge.

This is a similar play to what you'll see Chip Kelly run with the Eagles--Shady McCoy and Nick Foles--pretty often.

By the fourth quarter, the Packers were well aware that the Seahawks were willing and happy to use Harvin in space. As Seattle looked to run out the clock and maintain their lead, they used previous tendencies to set up a nice deception play.

Below, they run Harvin behind Wilson and Lynch and this draws the Packers' defense over to the right side of the field. Wilson pump fakes in his direction and then dumps it off on a screen to Lynch.

This is a common play in the NFL, and the Seahawks aren't reinventing the wheel here. That said, what might be uncommon about using Percy for this is the insanely strong bite his reverse action gets from nearly the entire defense:

Similar to the idea of acting as a decoy, Harvin's lateral movement just prior to the snap is an excellent constraint to a defense that might start cheating inside to stop Lynch up the middle. With Harvin's speed to the outside, defenses must respect him laterally, and when they start widening out (cheating outside) and/or waiting to react rather than attacking, that's when you can run the ball inside with authority.

Of course, so we don't hammer on all this "gimmickry" too much, Harvin can also be utilized as a normal wide receiver.

As it goes with Harvin, he has the potential to be a huge factor for Seattle's title defense, but needs to stay healthy to do so. If he can, it's looking like the Seahawks have used the offseason to come up with a number of ways to utilize him to give them a huge boost both through the air and on the ground. Pete Carroll mentioned after the game that in effect, we're just seeing the tip of the iceberg.