The Patriots, Packers and Colts all advanced, but not necessarily because of the performances from a few key players. Here's a look at who needs to step up to get of the Hoss Under Roll team.

As you know, I like to point out players who have strong performances every week during the NFL season. To a lesser extent, when there are guys who don't exactly rise to the occasion I try to point that out as well. So, with there only being four games last week in the Divisional Round of the playoffs I decided that along with my Hoss Honor Roll I would also come up with a Hoss Under Roll this week, pointing out a few guys who might be on a milk carton after their performances last weekend.

I'm going to start off with Patriots defensive end/outside linebacker Chandler Jones, who is supposed to be the team's best pass rusher. He also just so happened to be matched up against Ravens undrafted rookie free agent offensive tackle James Hurst -- a guy whom I've previously referred to as "Burger King" -- for much of the game. And yet a week after Steelers outside linebacker James Harrison gave Hurst fits for four quarters, Jones found himself on lockdown most of Saturday night.

I know that Jones has been hurt a good part of the season but his team desperately needed him or somebody to provide a pass rush against the Ravens and he just couldn't seem to ever get it going. That might be excusable for some games because hey nobody is perfect and there are some pretty good left tackles out there, but with Hurst in the Ravens' lineup as the obvious weak link of the crew, Jones' inability to make the Ravens pay for singling him up put a lot of pressure on the secondary to cover for much longer than usual. With Ravens quarterback Joe Flacco standing pretty comfortably in the pocket for most of the night, he was able to slice the Patriots secondary up because sooner or later somebody was bound to come open.

The Patriots were able to pull out a 35-31 win at home last weekend but if Jones can't get his pass rush mojo back before Sunday its going to be hard for the Patriots to advance any further.

Another player whom I expected to see play a major role in the Ravens/Patriots game who didn't show up at all was backup tight end Tim Wright. I was sure that the Patriots would use that game to use Wright with starter Rob Gronkowski in order to create some serious matchup problems for the Ravens secondary. Instead, you wouldn't have even known Wright played at all if you just went by the stat sheet. As a matter of fact, I had all but forgotten about him until I watched the All-22 and saw him in there on a few plays.

I know Wright doesn't call the plays and I also know he can't throw the ball to himself, but I have a hard time believing that if Wright had proven himself to the coaches and quarterback Tom Brady that he was squared away that he wouldn't have been a much bigger part of the game plan last week. I just don't believe a guy of Wright's ability should go through a close game like that one without having even a single ball thrown his way. That was actually pretty ridiculous.

Its time for the trade for Wright to pay dividends. I would expect him to have a much bigger role this week against the Colts. 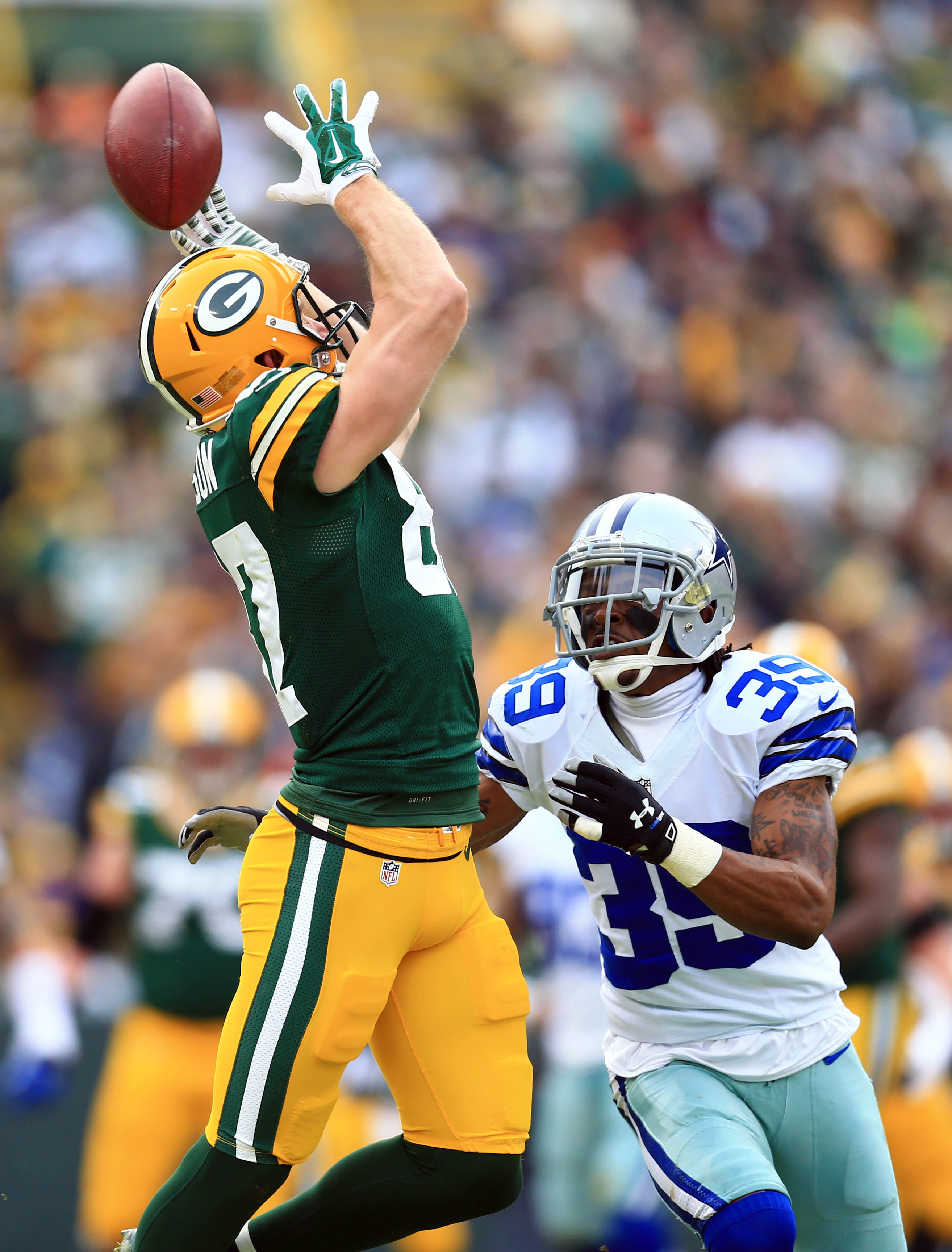 I mean Jeez Louise, in my column last week I said if the Cowboys could keep Nelson from making any 20+ yard catches they would win the game but with Brandon Carr likely drawing the assignment to cover him one on one, I didn't have much confidence in Dallas' ability to pull it off.

Well, not only did the Cowboys keep Nelson from making any big plays in the passing game, they damn near kept him from getting 20 yards total in receiving yards for the whole game. Nelson eventually finished with only two catches for 22 yards and no touchdowns.

Thankfully for the Packers his fellow receivers Randall Cobb and especially rookie Davante Adams took up the slack with both going over 100 yards receiving. Still, Nelson is not supposed to be able to get shut down by the likes of Brandon Carr. Jordy is too good of a football player and the Packers are paying him too much money for him to come up so small in such a big game. That's especially true in a game where his quarterback Aaron Rodgers is hobbled with a calf injury. If it happens again this weekend against the Seahawks (definite possibility) some Packers fans and maybe even a few front office members might start asking for a refund.

I kinda feel bad adding Colts wide receiver Reggie Wayne to this list with him being an older guy who is probably on his last legs, but the truth is after watching the All-22 Wayne was actually out there quite a bit for him to only be targeted once all game by his quarterback Andrew Luck. If the Colts are going to put them out there as much as they did, he can't just be some kind of decoy all game.

Just a few years ago it would have been absurd to think that the Colts would win a playoff game with Wayne only getting one target, now its almost as if nobody even noticed Wayne either way on Sunday. Kinda like he is already retired, so what's the use of talking about him?

Thing is, it's great that Luck is playing so well and that the Colts were able to get by the Broncos in a playoff game, on the road, with running back Boom Herron having exactly double the amount of catches as the most productive Colts receiver of the day, T.Y. Hilton. That is not, however, the formula for success that is going to serve them well in their bid to make it to the Superbowl — let alone one that will help them win it.

The Colts may not need a huge game from Wayne the rest of the way, but I highly doubt they can get by again without any production from him at all. Old man or not, Wayne has got to show up just like everybody else if the Colts want to get another ring.

Last but not least, let's talk about Packers cornerback Tramon Williams. I'm a Tramon Williams fan. The Packers like to play a lot of man to man and Williams ain't scared of shit when it comes to coverage. But he might have been checking Southwest "Want to get away?" flights at halftime, considering how poorly he played against the Cowboys.

First he gets called for pass interference on Terrence Williams because of a little contact down field which may have been a weak call. My thing is that contact was also totally unnecessary so why risk it? The Cowboys turn that PI call which set them up at the Packers one yard line into six points on the very next play with a pass from Cowboys quarterback Tony Romo to fullback Tyler Clutts.

Then on the very next possession Tramon is matched up on Terrance again as he runs a simple five to 10-yard stop route. Tramon takes a bad angle trying to make the tackle and misses Terrance who then turns that five to 10-yard stop into a 38-yard touchdown. Two drives, 14 points and Tramon Williams was right in the middle of both of them. There was still almost eight and a half minutes to halftime at that point.

After halftime Tramon would have another questionable pass interference call go against him, this time while guarding Dez Bryant, but thankfully for the Packers the Cowboys eventually fumbled that opportunity away rather than capitalizing on Tramon's mistake again. Yes, that just so happened to be the drive where Packers defensive end Julius Peppers forces Cowboys running back Demarco Murray to fumble on a play that looked for the world to be a sure touchdown for Murray if he had held on.

Now it's not like Tramon Williams got burned for a gazillion yards or a bunch of touchdowns, but it's playoff time now and every mistake is magnified exponentially. The Packers will need a much better effort out of him against the Seahawks if they want to slow down the suddenly potent Seattle passing attack.