The Cardinals blew a 19-0 lead before rallying for the victory.

Share All sharing options for: Cardinals vs. Seahawks 2015 final score: Three things we learned from Arizona's 39-32 victory over Seattle

The Arizona Cardinals blew a 19-0 lead before rallying to beat the Seattle Seahawks 39-32 Sunday night at Century Link Stadium.

The Cardinals still led 25-17 going into the fourth quarter, but their pass protection fell apart. Seattle's pass rush came up with two strip-sacks in the first two minutes of the fourth quarter, both leading to touchdowns. Bobby Wagner returned the second one 22 yards for a touchdown to give the Seahawks a 29-25 lead. The 2-point conversion failed, but Seattle had completed a comeback from a 19-0 second-quarter deficit.

That didn't last long, as Carson Palmer led an 83-yard drive that ended with a 14-yard touchdown pass to Jermaine Gresham. The extra point made it 32-29, and the Cardinals were able to stop the scoring flurry by forcing a Seahawks punt.

Andre Ellington clinched the win with a 48-yard run on the final play before the two-minute warning. Steven Hauschka's 46-yard field goal cut the deficit to 39-32 with 58 seconds to play, but Larry Fitzgerald grabbed the onside kick.

The Cardinals are now 7-2 and lead the 4-5 Seahawks and St. Louis Rams by three games in the NFC West.

Arizona opened the scoring on Chandler Catanzaro's 33-yard field goal early in the second quarter. On the ensuing drive, Seattle was called for holding on its first play, putting the ball on the 10, and on the next snap, Wilson collided with Russell Okung and fumbled the ball. After a scramble, he fell on it in the end zone, where Frostee Rucker dove on him for the safety.

Things went from bad to worse after the free kick, as the Cardinals drove down the field before Carson Palmer hit Michael Floyd for a 27-yard touchdown and a 12-0 lead. The game was delayed for several minutes during the drive after Mike Iupati sustained a neck injury. Iupati was placed on a backboard and loaded immediately into a Seattle Fire Department rescue vehicle that had been driven on to the field.

The Seahawks went three-and-out, and Palmer only need three plays to hit Floyd for a 35-yard touchdown pass. Catanzaro's extra point made it 19-0, with the Cardinals having scored all of their points in just under nine minutes.

Seattle finally got on the board on Will Tukuafu's 1-yard run with 1:52 left in the half, but the Cardinals had enough time to drive down the field for a 43-yard field goal to make it 22-7 at the intermission.

The Seahawks continued to show signs of life, starting the second half with a field goal, but Wilson was intercepted by Tyrann Mathieu, setting up Catanzaro's third field goal. That gave the Cardinals a 25-10 lead, but Wilson hit Doug Baldwin to pull Seattle back within eight points with 4:52 left in the third.

Seattle's comeback continued on the first play of the fourth quarter, as Cliff Avril came unblocked to force a strip-sack -- the 22nd of his career -- but he was celebrating the sack and didn't see the ball on the field. Luckily for Avril, K.J. Wright recovered for Seattle on the Arizona 3.

Marshawn Lynch bulled his way into the end zone on the next play, but the 2-point conversion failed, leaving the Cardinals with a 25-23 lead.

1) Neck injuries are a scary sight

Century Link Stadium is normally one of the loudest places in the NFL, but it fell into an eerie silence during the delay for Iupati's injury, especially after the Seattle Fire Department ambulance came onto the field: 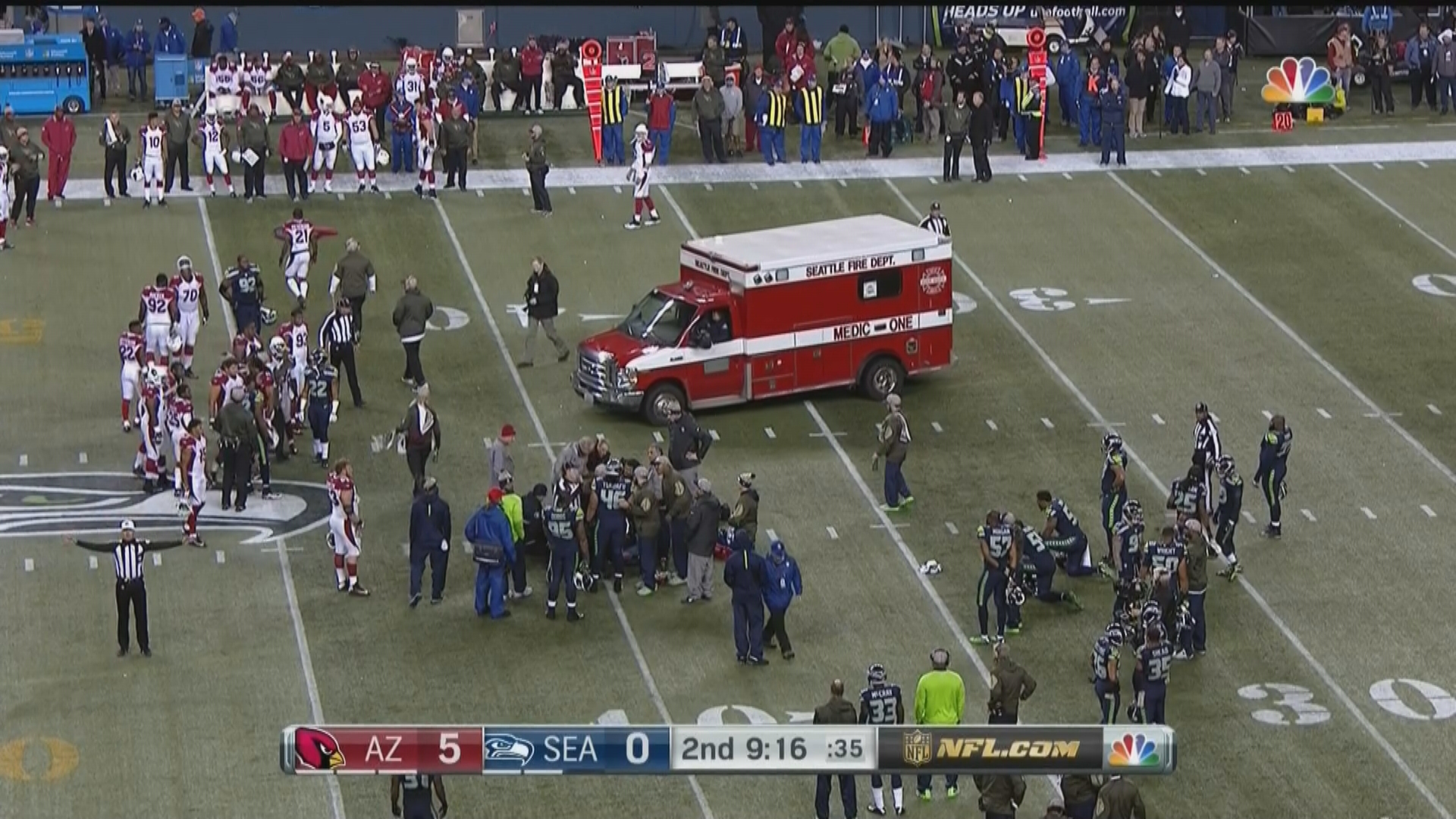 The fans did cheer respectfully when Iupati was loaded into the ambulance, which then drove slowly into the tunnel. Luckily, the Cardinals were able to quickly announce that, while he was being taken to a local hospital, he was conscious, alert and had feeling in all four extremities. He was released before the end of the game and was expected to fly home with his teammates.

The Arizona coach won his first two challenges, with the second coming when he got a spot overturned that had given Russell Wilson a first down with a scramble. Now facing 4th-and-1, the Seahawks ran a fullback dive that barely crossed the line of scrimmage, but it was enough for the first down.

Despite a lack of a clear camera shot, Arians challenged a second straight play. Had he been successful, he would have been the first NFL coach to get three calls overturned in one game, but after the review, the officials ruled that the spot stood.

Coming into Monday. Seattle fullback Will Tukuafu had only carried the ball once in a career that started with San Francisco - a four-yard gain last season. He got his second try against Arizona and dove through a gaping hole for his first career touchdown.

Tukuafu shared his joy with the goal post's padding.