Aaron Hernandez still hasn't been suspended by the NFL

Roger Goodell gets it right by not suspending Hernandez. It's not like he has been convicted beyond a reasonable doubt of killing someone.

Share All sharing options for: Aaron Hernandez still hasn't been suspended by the NFL

Folks, sorry I missed my Friday take last week I was overserved last Thursday, Friday, Saturday and Sunday and was way to hungover to deliver any takes. But to make it up to you I have a lightning round of takes ready to send you in to you're weekend. God Bless and enjoy.

If theres one thing the commissioner has been consistent on, it is his punishments. Goodell has been smart on this one, refusing to officially suspsend Hernandez until its proved beyond a reasonable doubt that he shot at least one of the 6 people that he has been linked to. With a divisive issue like murder its best that the league doesnt paint itself in to a corner until it has to. And while Goodell has said that he will void any new contracts offered to Hernandez by most likely the Raiders, theres a big difference between this and formally suspending someone. Show me where it says that being ACCUSED of murder is against the leagues code of coduct policy. Go ahead Ill wait.

Roger Goodell and the NFL have gotten it right yet again, while Eric Holder and the Justice Department are running around like chickens with there heads cut off (again, no offense to Florios uncle). Aaron Hernandez IS BEING DENYED THE OPPORTUNITY TO EARN A LIVING even though his employer, the NFL has yet to formally suspend him. This is a clear denial of his, and more importantly, my civil rights as a NFL fan. I guess Obama wants to make it against the law to discriminate against Gay people, but MY fantasy team has to suffer just because someone else might have killed 3 people? Goes both ways.

Last time I checked in America your innocent until proven guilty. The facts are the ones on trial here, not Hernandez.

The latest victim of this witchhunt? Patriots Superfan Paul Haddad whose only crime was calling in a bomb threat during a murder trial.

Goodells got it right by not enacting any sort of punishment on Hernandez, but hes been hamstrung by the slowpoke court system. The only 12 angry men Hernandez should of been worrying about are the Seahawks and there fans, instead one of the greatest matchup nightmares in the league was forced to sit out the last two seasons spending his time on the defense instead of the offense where he belongs. When will the Patriots ever catch a break?

If you think watching Gronk go nuts after winning a superbowl was insane just imagine what Hernandez would of done. The Superbowl parade would of tunred into a drive-by. Youd have Gronk taking shots on a duck boat, and Hernandez firing shots into a ducking crowd. Instant Vine star.

Does Sean Peyton have a semi in the coaches picture? 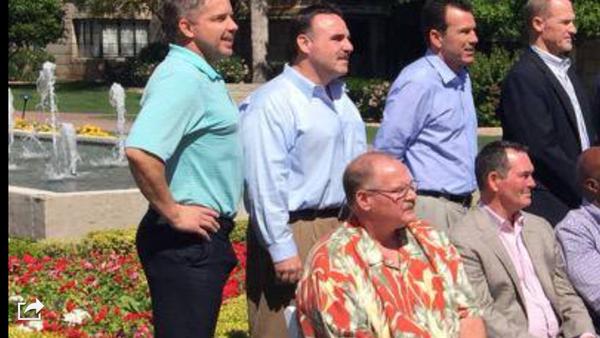 It sure looks like it folks. I guess Rob Ryan isnt the only one in New Orleans whose looking like hes got a little chubby.

Lets talk some basketball folks. The Wildcats wiped the floor with the Mountaineers yesterday. Im not so much a college hoops fan as I am a NCAA fan in general but I had to tune in to this Appalachian matchup last night considering that usualy when folks from West Virgina and Kentucky get together for a sweet 16 birth it doubles as a baby shower.

You cant blame WVU though for assuming 39 points would be enough to win, there only mistake was in thinking it was a IQ test.

Honestly folks 79-38 sounds more like the average pants measurements in these two states then a basketball game. Theres not a doctor in the world whod let Kentucky or West Virginia residents near anything called a Sweet 16 on account of there type 2 diabetes.

Got to give credit to the Wildcats though, that Kentucky defense was amazing. They had West Virginia dribbling off there legs so much I had to double-take to make sure that was Bob Huggins and not Rick Pitino on the sidelines.

And finally, one man's crusade against the wussification of America:

In a nation where everyone gets a participaton trophy, there's one principal whose making a stand, and thats Ken Theissen of Wichita East Highschool in Kansas. 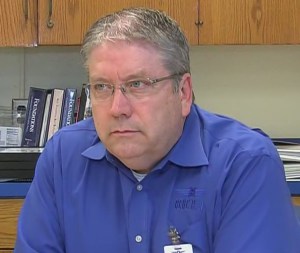 Michael Kelley is a special needs student at Wichita East who has down's syndrome and autism. He loves basketball and play's on a team for other special needs kids. Michaels got alot of school spirit, but he took things a little to far when he wore a jacket to school with a counterfit varsity letter that his mom bought for him:

Turns out, the letter is an official Wichita East High School varsity letter, and East High says he is not supposed to have that letter.

KSN talked to his mother Jolinda Kelley. She says Michael, her adopted son, is one of a kind and loves to play basketball.

When he was recognized for participating, Jolinda bought a varsity letter and put that letter on the jacket.

She was shocked when she says he was asked at school to take the jacket off.

"Another parent, from what I am told, was upset that my son was wearing his letter jacket."

Good for that parent. Specal needs children have had it to easy for to long. He needs to learn that its not all wine-and-roses in this life, you dont just get important things like a varisty letter because your mom buys one for you- you get one because your dad was borderline abusive and pressured you into playign spots. A varisty jacket is the last bastion of honor in this country. It use to mean something. How else are people suppose to know that your better at them in athletics unless they ever get into a conversation with you, or ask your parents how your doing, or read the school newspaper, or see you dating a hot chick, or get beat up by you?

When I first read this story I was sure there was a PC police twist coming here, but Im happy to report that the principal made a stand for all the students who WERENT special needs. Special needs children have been mocking and imitating non-special needs kids for to long in this country and its about time a High School Principle made a stand for OUR rights.

The mother claims her son was asked to take that jacket off and was given a sweat shirt to wear instead.

The family says it was told only varsity teams can wear the letter according to East High’s policy.

East High Principal Ken Thiessen says, "Teachers told the parents they would prefer he not wear the letter on his jacket."

The parents complaned to the administartion, but thankfully Theissen was quick to stand up for the integrity of the varsity letter when asked if he would allow special needs kids to wear varsity letters:

"We have considered it, and our decision was no. We decided that is not appropriate in our situation because it is not a varsity level competition."

While many of you PC police out there might think "whats the harm?" Ive got news for you- Wichita East won states in basketball so this kid is essentally LYING on his resume by wearing this. If you let special needs kids wear varsity letters then whats next letting them go to the same dances and ride the same busses? So a salute to you Principal Theissen- your dedication to standing up for the sanctity of the Wichita varsity letter truley gives you a big "W" in this reporters "I's."