This could be Eli Manning's last season with the Giants

The Giants have a big, expensive question to answer about their quarterback.

Share All sharing options for: This could be Eli Manning's last season with the Giants

The New York Giants are in a predicament with Eli Manning. The quarterback who helped the team win a pair of Super Bowls is entering the last year of his contract. Before they can agree to a new contract, the Giants need to answer some questions about the future of the organization. The longer they wait, the more expensive a deal gets.

Opinions about Manning vary around the league, but few believe that the Giants could easily replace him. Since arriving in the Big Apple in 2004, Manning has started 178 of the team's 187 games, including the playoffs. During that span, he has compiled nearly 40,000 passing yards, 259 touchdown passes and, most significantly, two championship rings. For all Manning's shortcomings on the field and the tiresome "elite" debate that surrounds him, he remains one of the few quarterbacks that a team can build a contender around.

Franchise quarterbacks rarely make it to the final year of their contracts. Teams tend to take a proactive approach, extending those players years before their deals expire to avoid the unpleasantness and uncertainty that flirting with free agency brings, not to mention the likelihood of agreeing to a more onerous contract that can put the team in cap trouble down the road.

On the rare occasions when a team allows their signal caller to reach a contract year, it usually signals instability within the organization as well as concerns about the player's future.

Looking back in recent history, only two big-name quarterbacks, Joe Flacco and Jay Cutler, have made it to the end of their contracts without an extension. The former nearly signed a new deal the year before his deal was set to expire, instead opting to play out the season and hope for a more positive outcome. Flacco went on to lead the Baltimore Ravens to a championship, and cashed in to the tune of six years, $120.6 million with $52 guaranteed. As for Cutler, his team felt uneasy about committing long-term after changing coaches in 2013. The Chicago Bears waited, and ended up awarding Cutler a new seven-year, $126.7 million deal, $38 million of which was fully guaranteed.

In both cases, the decision to table contract talks cost the teams millions in guarantees and total value. As a result, the Ravens face another grueling negotiation with Flacco in 2016 when his cap number soars to more than $28 million, while the Bears find themselves unable to move on from Cutler due to his bloated contract.

Both Manning and the Giants have expressed confidence in a deal getting done, but the team's still taking a big risk.

Coughlin, now in his 12th year with New York, has accomplished more than all but a few of his contemporaries. His arrival signaled the end of the wayward squads of his predecessor, Jim Fassel, and ushered in an era of discipline and toughness. Coughlin guided his team to a championship by his fourth year, a shocking 17-14 upset of the previously undefeated New England Patriots. The Giants would go on to defeat the dynastic Patriots again in Super Bowl XLVI.

Yet, in the results-driven NFL, championships only buy a head coach so much rope. Coughlin, who had to fire his offensive coordinator in 2006 in order to save his job, found himself on the hot seat again in 2011. The local media openly called for his head throughout the season, especially during the team's four-game slide during November and December. Coughlin silenced his critics with another Lombardi Trophy, but a subsequent three-year playoff drought has rekindled the fire beneath his keister. Should the Giants fall short of the postseason again in 2015, Coughlin's tenure in New York, and likely his illustrious coaching career, will be over.

The potential change at head coach has paralyzed the Giants in their approach to Manning. With six projected starters celebrating their 30th birthday by the start of the 2016 and a handful more in their late 20s, the core of New Yorks' roster is beginning to show signs of wear. If Coughlin leaves after this season, the team may see it as an opportunity to overhaul the roster.

In such a scenario, it's unclear whether Manning, then age 35, would still figure into the Giants' future. The chances of him remaining in New York increase if current offensive coordinator Ben McAdoo is chosen as Coughlin's replacement, but as a 37-year-old assistant coach with only one year of play calling under his belt, a promotion to the big chair seems a little more distant.

Further complicating any extension talks, the value of upper tier quarterbacks has changed significantly since Manning last signed a contract in 2009. At that time, his deal (which averages $15.3 million in salary) made him one of the league's highest-paid players, exceeding even his more-accomplished brother's contract with the Indianapolis Colts. Now, the Giants quarterback barely scrapes into the top 15 for average pay at his position.

Manning and his agent will look for a steep raise on his next deal. The question concerning the Giants is how much more is he worth.

Get all kinds of NFL stories, rumors, game coverage, and inane comments from the NFL media in your inbox every day.

In the NFL, the value of a contract is generally determined by the leverage each side wields as well as the most recent deals signed by similar players. The $20-million-per-year QB club has exploded in size over the last few years. New megadeals for Cam Newton and Ben Roethlisberger will greatly affect any contract talks with Manning.

Earlier this offseason, Newton signed a five-year, $103.8 million extension that will keep the former No. 1 overall pick in Carolina through 2020. The deal, which pays out $68 million over the first three years, effectively sets the floor for Manning's next contract. While the number of years and total value of his deal will differ, the structure should reflect Newton's deal.

Manning's payout is likely to be much higher. Roethlisberger, Manning's classmate from the 2004 draft, agreed to a four-year extension that adds $87.4 million in total compensation with $31 million fully guaranteed, per Over The Cap. While Roethlisberger has the superior career numbers, Manning's camp will argue that their equal ring total (two each) and the latter's superior track record in the postseason (8-3 record) necessitates at least a comparable contract.

And a Roethlisberger-esque deal is precisely what CBS Sports' cap expert Joel Corry expects for Manning. The former agent and current salary cap and contract told the New York Post that $20 million in average annual value is exactly what he expects Manning's camp to demand. As for the length of the deal, Corry said Manning "may ask for five years and settle for four."

None of this comes as news to the Giants. In normal circumstances, the team would have gotten ahead of the curve and extended Manning a year ago. However, Coughlin's tenuous hold on his job the past few years, as well as Manning's disastrous 2013 season, forced the team to wait. Now, it must pay a premium.

Time is not on the Giants' side

The longer they wait to extend Manning, the greater his cost rises. Not only does he move closer to free agency, but Manning can also point to the new quarterback contracts expected to surface in the coming months. 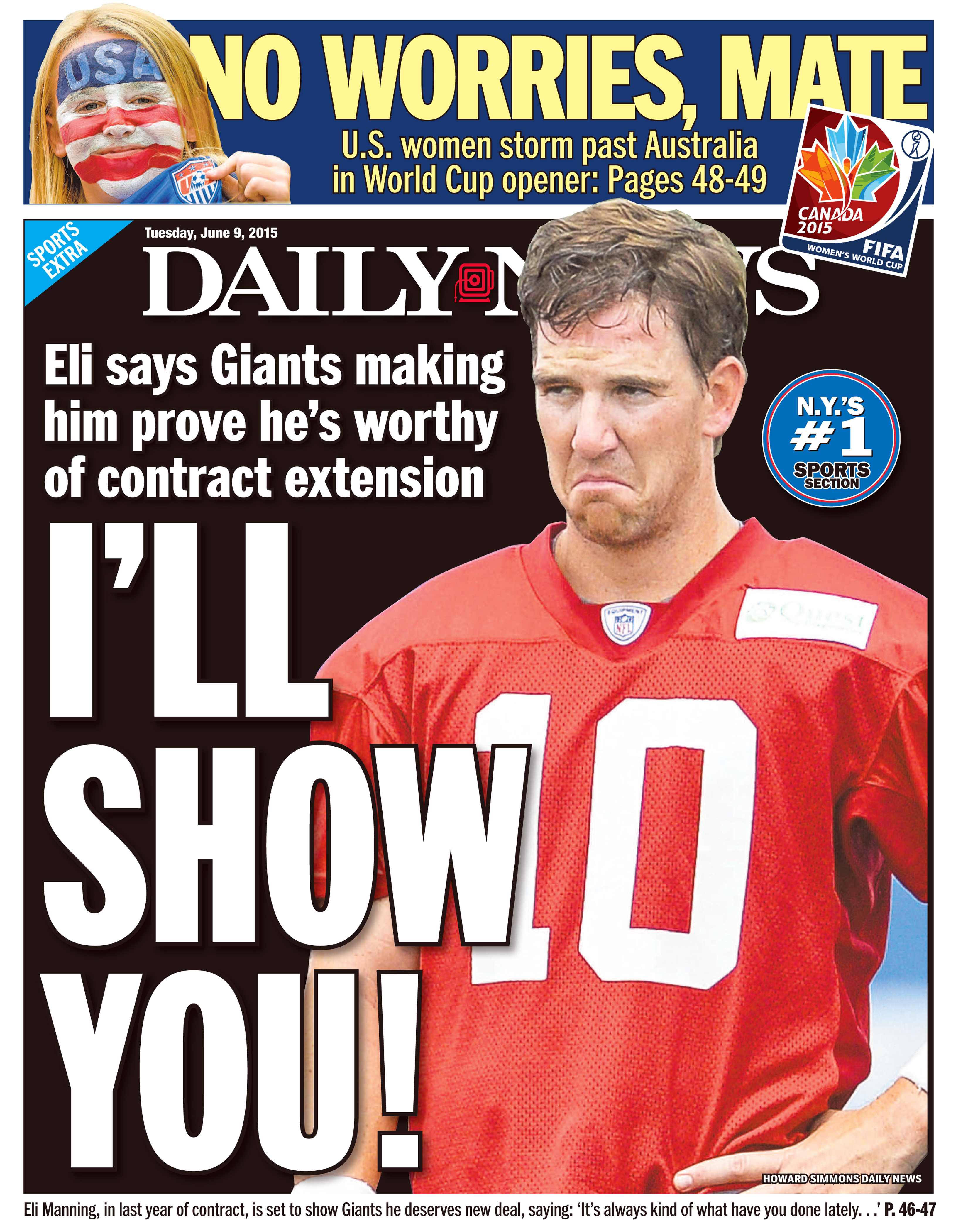 Prior to the start of the 2016 season, both Andrew Luck and Russell Wilson will most likely have new contracts in place. Each signal caller holds tremendous leverage in their respective negotiations due to their already formidable resume and youth. With the aforementioned foundation of the deals signed by Newton, Roethlisberger and others, Luck and Wilson should net market-setting contracts.

Corry also sees these factors playing into the Manning negotiations if the Giants continue to drag their feet.

"You are going to see the market escalate if reports are correct that Seattle's prepared to make Russell Wilson the highest-paid player," he said to the New York Post. "And there are reports about Indy doing something uncharacteristically early with Andrew Luck, which would make him the highest-paid player. The market's gonna go up, and usually people benefit from the trickle-down effect."

The Giants may end up paying Manning less than Luck or Wilson, but by waiting the floor and ceiling for a new deal just keeps shifting upwards. After all, these negotiations are about leverage, and Manning can increase his demands if two more $20 million per year quarterback contracts hit the books.

Another could come in the form of Philip Rivers, another member of the 2004 quarterback draft class. Like Manning, Rivers is set to become a free agent after the upcoming season, and most expect he too is shooting for north of $20 million annually. Manning's agent simply isn't going to accept a contract inferior to Rivers', another reason for New York to consider accelerating negotiations.

The Giants retain the ability to franchise Manning after the season; however the tag's utility is minimal in this situation. This year, teams paid more than $18.5 million to franchise a quarterback, a number that will increase sharply with the influx of new deals. While New York would retain Manning for 2016, they hurt their stance in negotiations, as a subsequent franchise tag would cost 120 percent the amount of his previous salary. The added headaches associated with franchising a player makes an even more compelling argument for doing a deal now.

At the same time, the Giants don't know whether their current head coach will remain in the fold past 2015, nor what kind of team a potential replacement will want to build. If New York fires Coughlin and replaces him with, for example, a coach from the college ranks that prefers to run an up-tempo, spread concept like the one Chip Kelly has modeled with the Philadelphia Eagles, he will want a quarterback that makes quick decisions and avoid turnovers. Given Manning's propensity for interceptions (most in the NFL over the last five years) and holding onto the football (registered the 14th-most drop backs of 2.6 seconds or more, per Pro Football Focus), he may simply not fit in with the next version of the Giants. If so, committing $20 million or more annually to him could prove a costly mistake.

If the Giants want to seriously discuss an extension with Manning before the season, they need to hurry. Manning appears more than comfortable betting on himself to play well in 2015, and that would give him a strong bargaining platform next offseason. The closer he gets to Week 1, the more it makes sense for him to simply wait and try to maximize his earnings. The Giants' conservative approach only makes sense if the team tanks and the head coach is let go after the season, an outcome they'll seek avoid at any cost.

SB Nation presents: If Eli gets cut loose then maybe his rival to the south will have interest