Ever wonder what it's like to be at a rock concert/Presidential debate? Well here you go.

Share All sharing options for: What a guy with a Joe Flacco sign learned at the GOP debate

CLEVELAND -- After a night spent hobnobbing with our nations political Elite, I woke up with a hangover so bad my tounge has the shakes. And though my mind is trying to trick me into thinking I got hit with a garbage truck filled with untuned guitars, I know better. Last night was a bucket list checkmark. It was the opening night of the Republican Presidental Debates, and my god what a thrillride. It was like a superbowl, a world cup that's not in a weird time zone, and a Tyson fight expcept with less people surrounding you that youd want to have sex with.

But let me piece together what I saw last night, which was for all intensive purposes a sporting event of epic purportions:

The tailgating crowd arrived about 4 hours before the main event. Thery got there early and we were loud, proud, and plowed. It was a news media circus with probably 500 people outside and nearly half as many reporters getting takes from anyone who could operate a poster.

Not to brag but I was probaly the drunkest.

Met alot of people that will be in all honesty friends for life:

And my dude here is basicaly the earliest robin of spring for dropping the first Hitler reference.

Not to make this all about myself but I was probably the best dressed person there. I invented my own shirt and American flag shorts that I made out of pants:

I was there to represent those without a voice- the truly most discriminated class in America. As liberal paper's of record such as the Washington Post continue to silents our first amendment right to free speech by eliminated comment sections, Im reminded of a old poem from a author long forgotten: "First they came for the internet commenters, and I said nothing."

My message struck a chord with many of the local Cleveland TV reporter's who intervewed me as I carried my d-fence sign as a show of solidarty with other internet commenters to "keep the noise going" in the comments and "dont let the enemy audble."

In case you cant tell I played a bit of competitive football back in my day and learned a few tricks on keeping your oppnet uncomfortable. BBC even intervewed me about my politics:

Wayne from Texas is a "big time" supporter of #trump. Says he represents a section of society usually neglected. pic.twitter.com/StulkXycck

Listen I dont want to act like it was all peach's and cream. There were some administrative problems for the Republican Debates from the beginning.

For one, they flip flopped on issuing me a press credential so I had to resort to asking people if I could buy a ticket on the street. The most amazing thing about being at this debate was watching people walk buy and I was continuously offering them more and more money that I didnt have, and just seeing how none of them even stopped.

"A thousand dollars" (which I had no intenton of paying them)

I literaly offered about 100 people $2,000 and not one person even stopped in there tracks to ask me if I was serous..

But I can understand why people were holding onto there debate tickets tighter then their hopes of there daughters theoretical chastitys and thats because it was basically like Thursday night Raw was coming to town and dear god it was. Hell was coming and Donald Trump followed with it.

The state of Cleveland had GOP fever to the point where Progressive Field across the street CLOSED DOWN ENTIRELY. Tactical retreat or mere scheduling conicidince, I dont know, but you have to admit it was ironic.

But it was 6 PM and the Conservative field was just getting warmed up.

I was told by NUMEROUS people in bowties that I stood no chance to buy a ticket to get in no matter how hard I flirted with there wives so I eventually just pivoted into making sure my message was heard. I made a lot of friends and likeminded folk, my BENGHAZI acrosstic on my back was a real hit among the cougers moms crowd, and I even got to meet a real Cleveland Indian.

Speakiing of the liberals, this guy out front had some very interesting things to say about the liberal media and specially MSNBSPN and how there cramming this liberal sports coverage down my throat and making me watch it, and we got into in pretty hard about who cares less about Michael Sam:

I should note I was intoxicated at this point holding up another sign saying simply "Obama sucks at football." It was a big hit. And I expect you can find these videos on your source for greater Ohio news.

I swing by Chris Matthews show to hang out with the Hardball crew, and there producer came over pretty quickly and asked me to take down my Obama Sucks at Football sign. There you have it proof that MSNBC is liberal claptrap. But I knew my rights so I stood my ground and held up my Flacco sign instead. 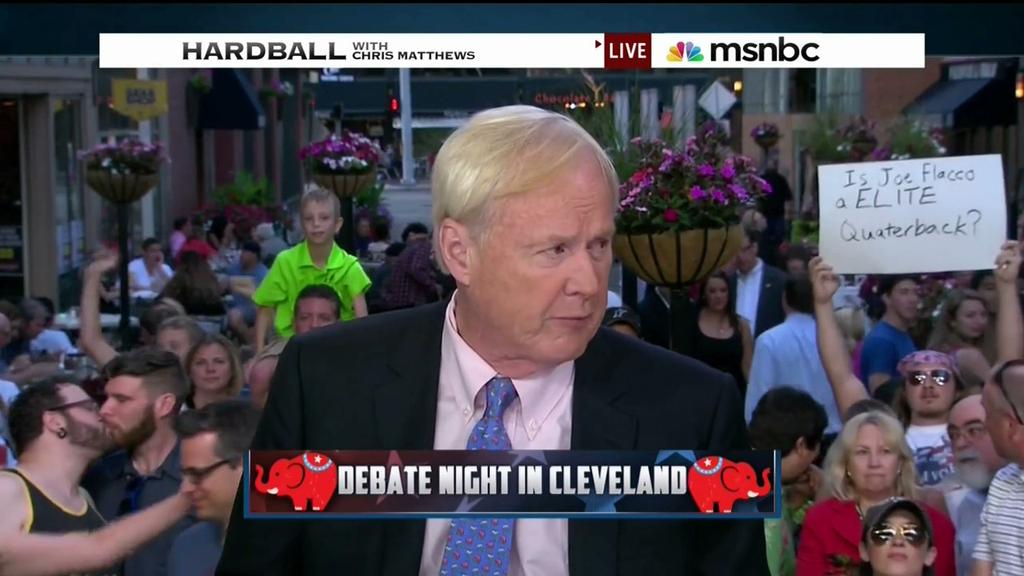 Which promted the Ravens to way in with:

We hardly think this warrants a debate... https://t.co/fP0BSQxU8u

FYI Cleveland Police all agreed that Flacco was not Elite but they all admitted theyd love to hae him on the Browns. I think the cops demonstrated a tremendous abilty to deescelate what could of been a very volitile situation by talking about Johnny Manzell instead of drawing a weapon, and I think other police departments could maybe learn a thing or two. Eeryone likes to talk football. But then one policeman brought me a pen which is literally a mightier weapon then a sword, because he wanted me to correct my signs spelling. Apparently there not content being the actual police but they also want to be the grammar police too. Grass is always greener I guess.

After being discriminated against I needed to just decompress amognst people who knew what it felt like to experence what I had just gone through. Fortunately I arrived at the RNC hotel just in time for the Black Republican Meeting, which was electrifying:

This probably isnt very fair of me. I may have just walked in at a lull in the get together and took a gotcha photo, and if thats the case then sue me. Actually please dont.

I made my way to the RNC hotel bar which was pretty much empty so I got to analyze the debate without any influence other than the entire audience which I supsect was actually "Saved By The Bell" Soundtrack reacting to brutal cut-downs with a satisfyihg "oooooOOOOOOOOOOHHHHHHHHHHHHH" which added to the atmosphere.

I mean this in all serousness- it was the most entertaning teleivision show I have ever watched. Im going to be covering the Democrat debates too but there too boring to even hate. Love em or shove em, the GOP gives you emotions, You cant hate what you cant feel., and I sense that alot of the GOP hatred toward's Obama and Hillary isnt really that genuine, they just love there own ideas so much that they know that whoever disagrees with them is evil. They make politics fun.

By the way if your thinking Im only slamming conservatives here let me go ahead and say that the deomcraptic debate is going to be the exact opposite of this- your going to need some old formula jack3d preworkout mix and whatever precursor to chrystal meth the Nazis gave there troops in France to make it through just the Candidate introductions: "Hi friends, and soon-to-be friends, I'm Bernie Sand-(all the lights in the auditorium shut off and no one notices or cares)

The Republicans are out of touch on one thing and one thing only- they need to disrupt the debate-watching industrial complex by opening it up as a Pay Per View revenue stream that they have ownership of. You want to make it so only rich people can vote, then hell son, logicaly you should make it so only rich people can watch the debate. If this was a million dollars on PPV I would of robbed the worlds poorest bank to watch it. I will open up my kids college fund to watch the next one thats a promise and anyone who disagrees with me is a damn fool.

But as for the substance of the debate itself, Trump won by a mile and cemented himself as the only true decison for Americans who want a canidate that isnt afraid to say whatever he wants to say no matter what that thing is.

Some of the highlights I remember:

The RNC After Party

So then the afterparty started and no one thought to ask me to please leave the bar for some reason so I stuck around, danced, ate there food, and drank their liquor, which was flowing like wine.

The DJs were injecting pure energy into the dance floor:

Shut up and Dance with Me

What I want by Hall and Oats

It started with a whisper

T-Swift- Shake it Off

Give it to me I'm worth it

A different song that samples "Sugar" by Maroon 5

Things were getting pretty hot and heavey on the dancefloor and hookups were in the process. But in case your wondering what kind of sex people were going to be having afterwards this was the kind of party that served crackers with a fork:

I looked everywhere for Huckabees large adult sons. The prime rib stand, the casino jail, in the bsaement cutting garlic with a razor like in Goodfellas, and they were nowhere to be found. Might be a stunt family he used to show off. Will look into this more.

As the party winded down I stopped by the roulette table next door to put $20 on Black 5 in honor of Joe Flacco but it turned out I didnt have $20 anymore, so I called it a night and got home in a strangers car who sent some dude a text last weekend and got to become part of a company that drives lost people around. All in all a pretty solid night, but now I have to get it together- Nikki Haley is giving todays luncheon keynote and I have some very important questons for her about the confederate flag and her stance on Joe Flacco.