Share All sharing options for: Michael Thomas and Josh Doctson are the most well-rounded receivers in the NFL Draft

The receivers in the 2016 draft class come in all shapes, sizes and levels of college productivity.

While Ole Miss' Laquon Treadwell has emerged as the top name on a lot of analysts' lists (including Dan Kadar's) -- and with good reason: He was carved out of granite and given life specifically to become an NFL wide receiver -- he might or might not be the best pick for your team. He's not quite as well-rounded as other options, and he's certainly not the top guy if you're looking for a smaller speedster. So let's break out the radar charts to figure some things out about this class of wideouts.

As with running backs, we're going to combine NFL Scouting Combine data with some of the advanced stats I use for tracking skill positions. For receivers, that means certain combine drills (bench press reps, 40-yard dash, vertical jump, etc.) and measures like target rate (the percentage of your team's passes that targeted you), catch rate, success rate (the percentage of your targets that resulted in a 'successful' play) and IsoPPP (the magnitude of your successful plays). It should give a nice, well-rounded look at physical traits, efficiency and explosiveness.

Here are some of the primary pieces of data for each of Kadar's top 15 receivers, plus a few others: 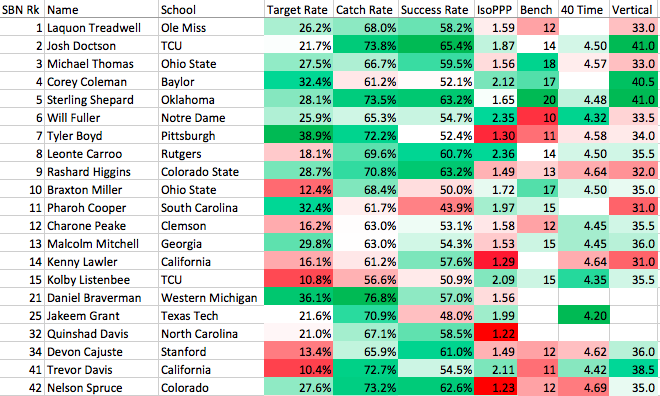 From this table alone, you can begin to figure out how to find possession receivers, all-or-nothing guys or other specific prototypes. But when we put these data pieces (and a few more) into a radar chart, it creates a pretty fun, easy-to-understand visual.

Below are radar charts for select draft-eligible receivers. Going clockwise from the top, you move from physical traits to efficiency measures to explosiveness measures. As I've said before with radars, they are a good way to get a combined look at both quality and style/type. That's certainly the case below.

If you're looking for a well-rounded guy... 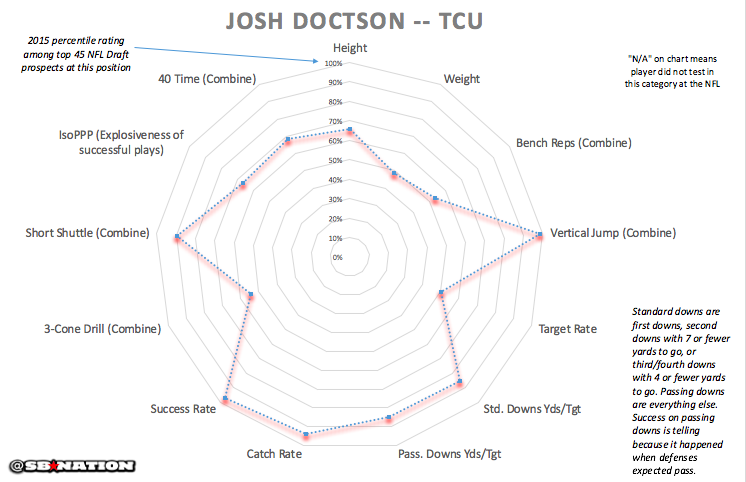 (And a retired NFL defender who's studied the film of both Treadwell and Doctson agrees with the numbers.)

Doctson is limited from a size-and-strength standpoint -- Treadwell and others clearly have the advantage there. But when it comes to his production, few were better in 2015. His leaping ability and agility are excellent, per combine data, and he combined high catch and success rates with solid explosiveness. He's a possession-plus guy.

Ohio State's Michael Thomas, for his part, might be the single most well-rounded guy in the field. 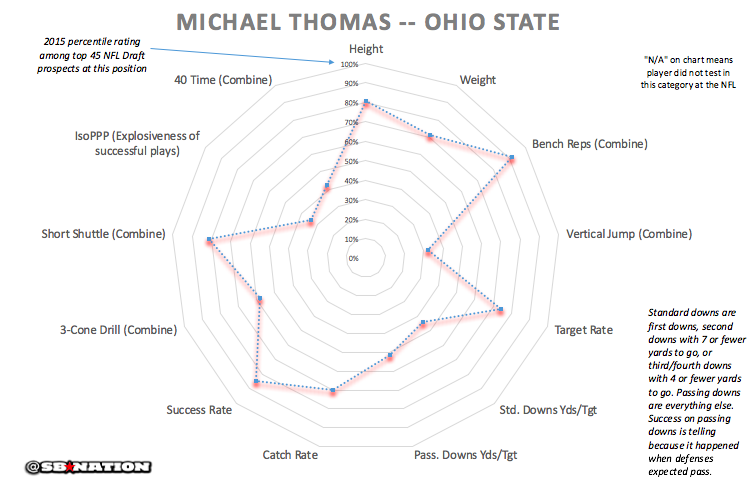 He gets a bit of a ding in the explosiveness categories, but not a big one. He's efficient, and he's big and strong, which limits the effect of a substandard vertical. In terms of the surface area of the radars you create, he might be at or near the top. He covers a lot of ground here. 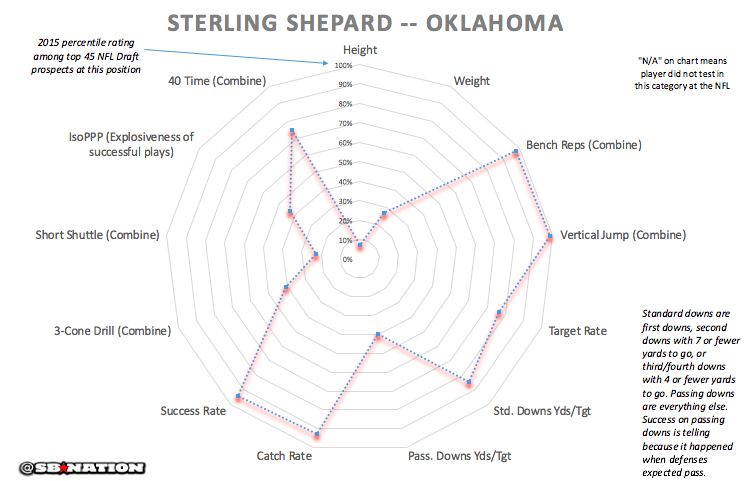 Oklahoma's Sterling Shepard is another guy who combines efficiency with solid explosiveness. Last year, he didn't get as many explosive opportunities as he did in 2014, when he averaged 19 yards per catch, but his 40 time shows he's got potential to be more than simply a possession receiver. The biggest ding: he's tiny. 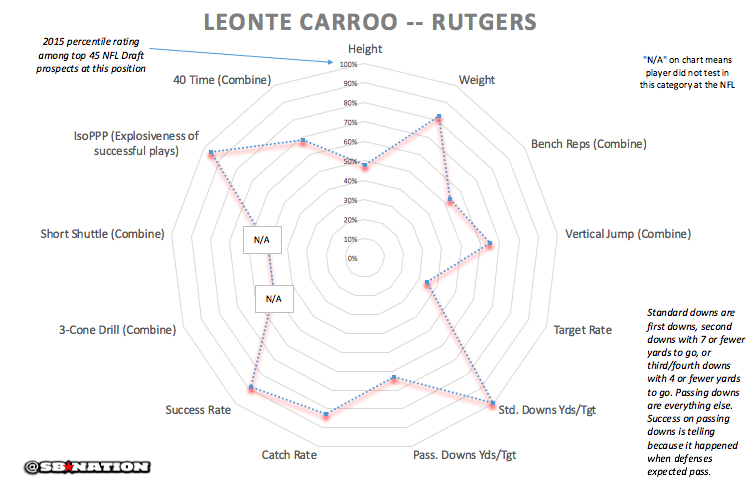 If you're looking for a potential hit in later rounds, Leonte Carroo seems to have a lot to offer. Rutgers' ultra-productive receiver played only half the season because of assault charges that were eventually dropped, so his target rate was low. And he did a lot of his damage on standard downs, when opponents had to mind the run. But his combination of efficiency (good success rate) and explosiveness is intriguing. He's thick, too.

If you're looking for a big possession guy... 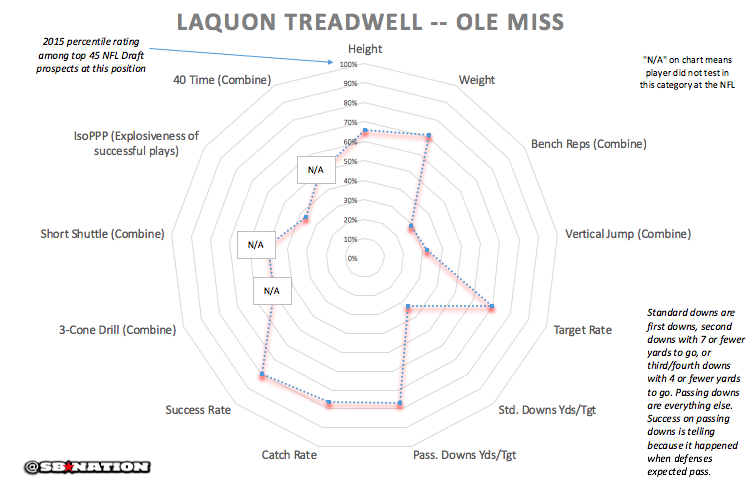 I do want to be clear about one thing: There's nothing wrong with being an awesome possession receiver. Those guys are incredibly valuable. And from the standpoint of size and efficiency, Treadwell has a lot to offer here. But his combine measurements were just OK, and while his explosiveness improved each year in college, it was still only good, not amazing. He passes the eyeball test, but there are reasons to wonder if he's indeed the best receiver in this draft. 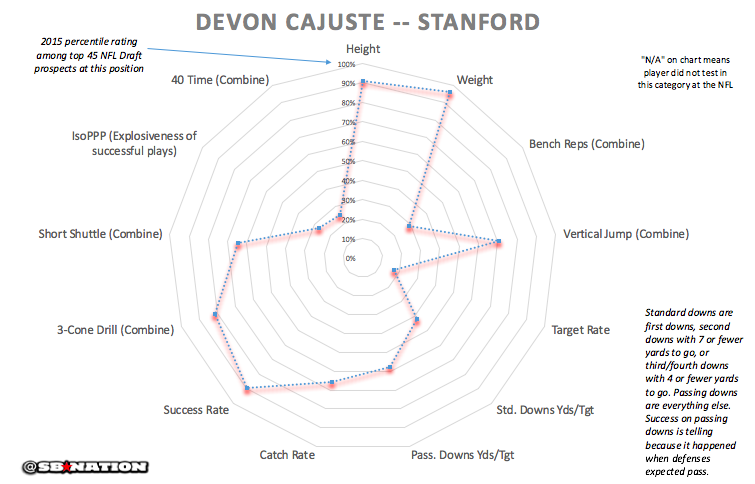 Devon Cajuste is not very high in the rankings, but if you're looking at him as a late-round sleeper, the Stanford target seems to check a lot of boxes. He's half-TE, half-WR, and as a WR he obviously tops the charts from a size perspective. But he was wonderfully efficient at Stanford in 2015, and his combine drills -- vertical, shuttle, 3-cone -- were all excellent for a receiver. He is in no way an explosiveness option, but if he does stick at receiver (or as some sort of hybrid), he might be my favorite sleeper of this group. 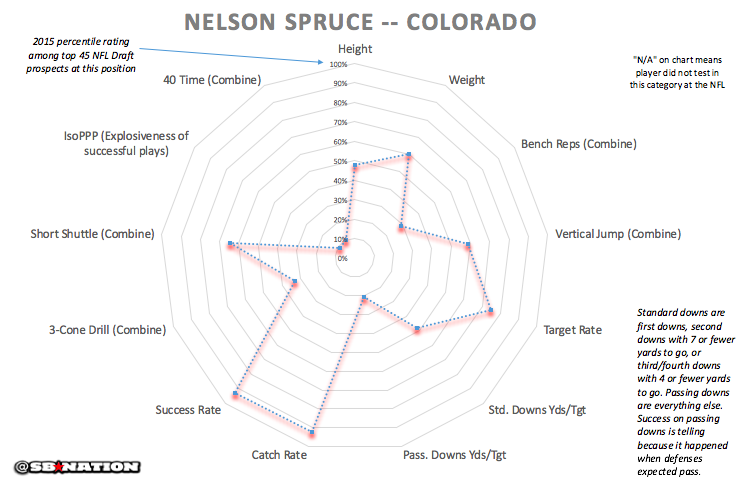 Nelson Spruce is another guy who was ruthlessly efficient in 2015 and graded out reasonably well in some of the combine exercises. He is a poor man's Cajuste, basically.

If you want speed...

... then you're in luck. This is a good draft for deep threats. 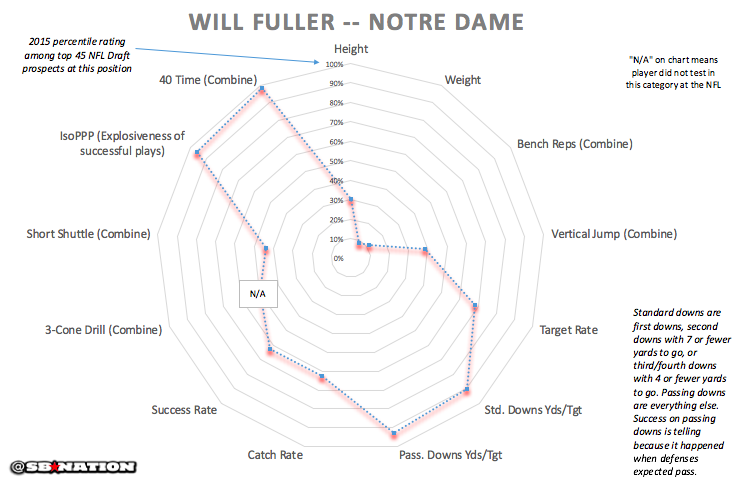 Will Fuller was clearly one of the most dangerous deep threats in college football last year. He thrived on both standard downs (where he could be devastating in play-action) and passing downs (where he had to be a go-to guy), and his explosiveness measurements are off the charts. He's tiny, and his possession skills are minimal, but if you've already got a bigger, more physical guy as a No. 1, Fuller could quickly blossom into a solid No. 2 or 3. 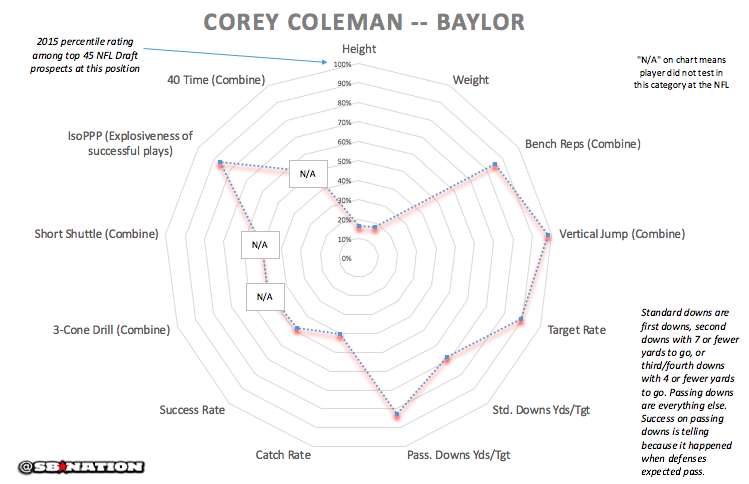 Coleman's numbers dropped when Baylor's quarterbacks began getting hurt, and he didn't do many drills at the combine. But his IsoPPP rating is strong, and the combination of his bench and vertical are unique. 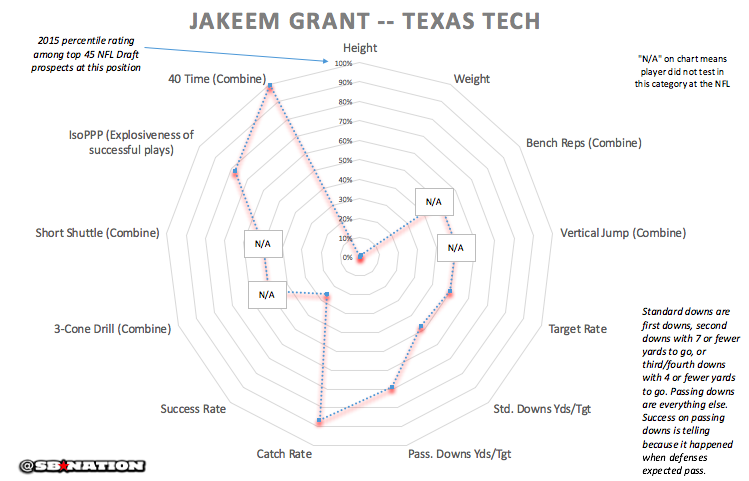 I mean, if you're looking for speed, look for speed. One of the smallest players in college football, Grant might have also been the fastest. Depending on who you believe, he ran somewhere between a 4.1 and 4.3 40-yard dash at Tech's pro day, and he showed over the last couple of years that he possesses solid catching ability considering his size and style.

If you're looking for a lump of clay...

... someone who can be molded into something you like in a couple of years, you've got a few interesting candidates there, too. 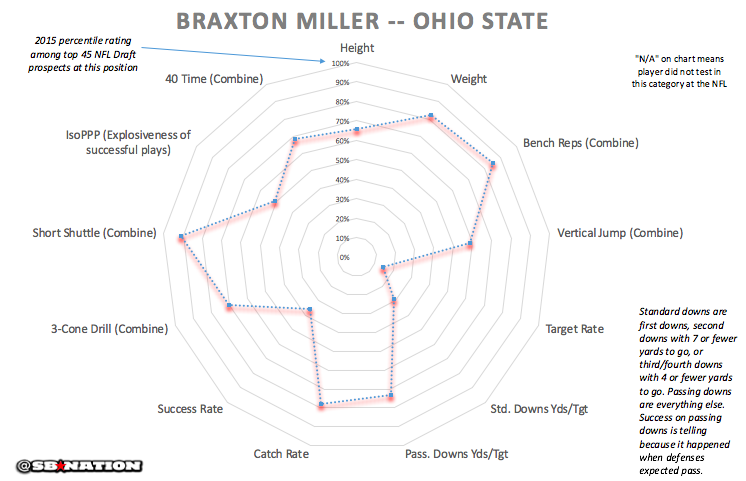 Braxton Miller famously played just one year as receiver for Ohio State after spending four years (three as a starter, one as a medical redshirt) at quarterback. His spin move destroys souls, and despite only occasionally playing a role in the Buckeye passing game (he caught zero or one pass in five of 13 games), his work, paired with combine data, paints an interesting picture. He's physically impressive, and he showed decent hands for a newbie. Most of his big plays came in the just three games, and he was otherwise more of a checkdown option, but again: one year at receiver. It only takes one coach to take a liking to him, and one will. 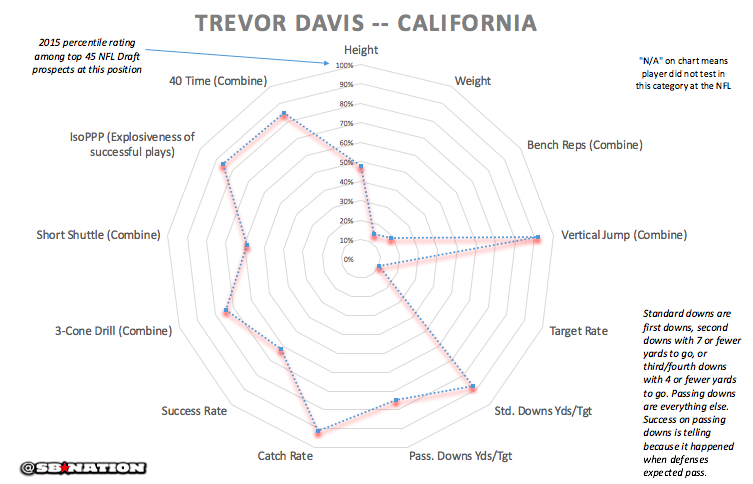 Six guys caught between 40 and 52 passes for Cal last year, so it was easy for Trevor Davis to get overshadowed. But while he brings almost nothing to the table from a size-and-strength standpoint (he's 6'1, 188), his combination of efficiency, explosiveness and 38.5-inch vertical could be appealing. He's only proven so much on the field, but if you're looking for a late-round steal, don't forget about Davis. 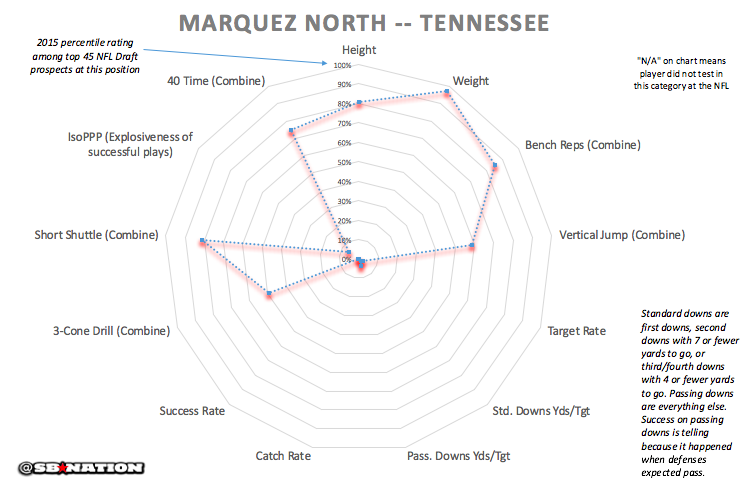 I feel bad putting this one on here, actually. Marquez North battled through injuries and a total lack of development (at least some of which was caused by injuries), and after catching 38 passes as a freshman, he fell to 30 as a sophomore and just six as a junior. And then he aced the combine. He's big, strong and fast, and two years ago he had 496 receiving yards. He might be damaged goods at this point, but again, only one team needs to see something in him.