Plus Sam Darnold’s barrel roll, sad Tom Brady and GIANT HATS in our winners and losers.

Share All sharing options for: The Jets had the guts to admit they screwed up with Zach Wilson

Beating the Bears without Justin Fields isn’t a colossal victory worthy of excessive celebration, but what the Jets did leading up to Sunday deserves a ticker tape parade. Benching Zach Wilson and seeing what Mike White could offer was one of the best coaching decisions in the NFL this season on a personnel level, and it might just be enough to catapult the Jets into the elite of the AFC.

It certainly helped that Wilson really bailed the team out of this being a difficult transition. His abysmal, excuse-laden post-game press conference, paired with reports that emerged about his attitude in the locker room became the perfect foil for head coach Robert Saleh to make the switch at QB, without getting a lot of blowback. Wilson’s attitude following the loss to the Patriots caused everyone except the most die-hard, delusional Zach Wilson fans to want a switch at QB. The decision left Wilson asking “Why me? Why now?” and Mike White answered that question in one quarter.

Still, it took guts. The most difficult thing for coaches and front offices to accept is when they’ve messed up, especially with a No. 2 draft pick who was pegged to revitalize the franchise and usher in a new era. The problem was that Wilson wasn’t progressing, not really — he still missed the majority of easy plays open to him, couldn’t do much in the intermediate, and forget about it when it comes to tough plays.

So, when Saleh spoke after the Jets’ offensive explosion on Sunday he really didn’t mince his words and made it abundantly clear about what White was able to do that Wilson couldn’t.

"He didn't need to be anybody but Mike White...he made the easy look easy and I thought he did a really great job with that" pic.twitter.com/c7tQtAkOUP

If you look at the play concepts the Jets used against the Bears it was an extension of what they’ve been trying to do all season. It’s a conservative offensive scheme that’s centered on the idea of peppering passes into the backfield to gain YAC, then punishing defenses that sell out to stop receivers or running backs on the flanks, leaving the middle open.

All it requires is for the QB to complete the passes in the backfield, and make the correct reads when the defense opens up, and if the quarterback can hit the any deep passes it’ll just expedite the team’s path to victory. New York’s defense is so good that it doesn’t require a game-changing QB to take over offensively, just someone who can put 15-20 points on the board and won’t screw up. Look at the differences in the passing charts between White in the Chicago game, and Wilson vs. New England. 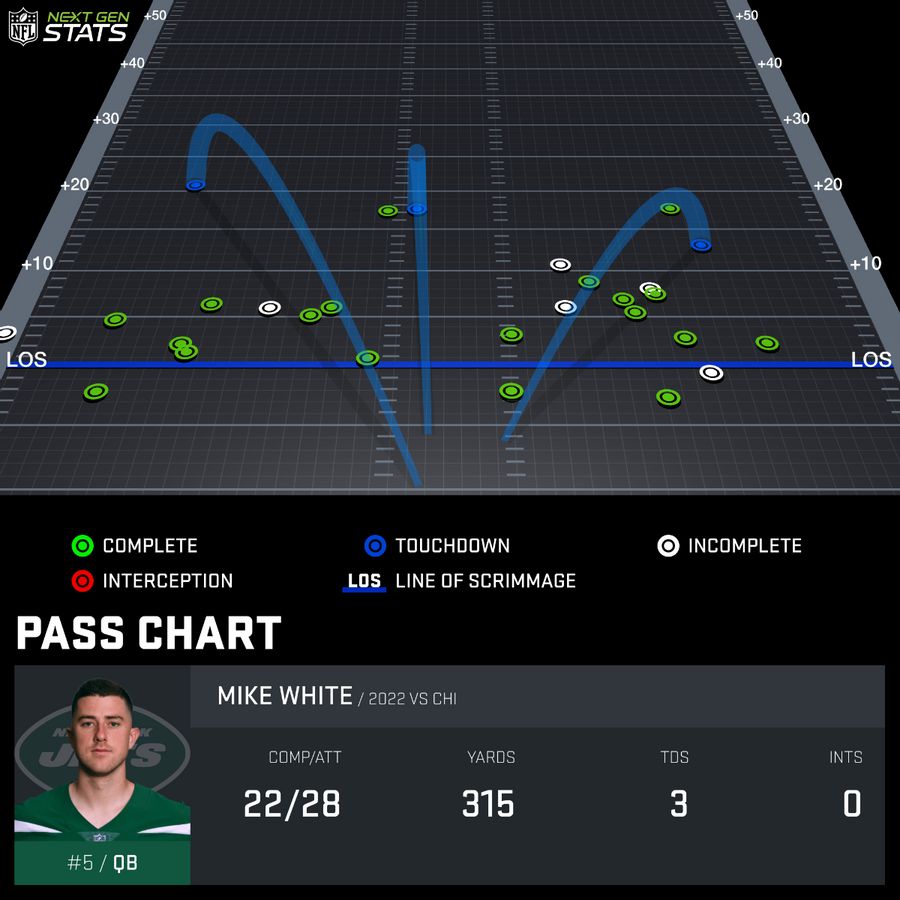 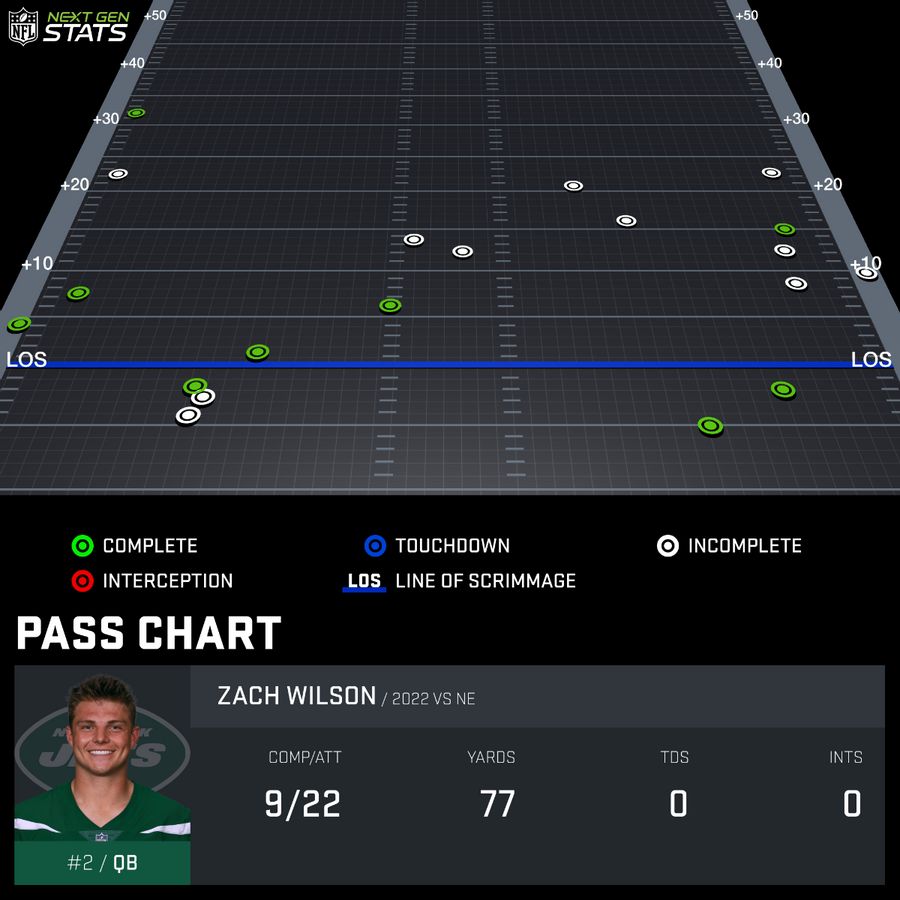 White only threw six more times than Wilson, but generated 238 more passing yards, not to mention the three more touchdowns. Obviously the trap is to believe White is a franchise QB and buy in too much to him being the heir apparent. This could all blow up again next week against the Vikings, but for now it’s very clear that White is better suited to lead the Jets than Zach Wilson is. An offensive spark is exactly what this team needed — and when paired with the defense New York has already displayed, it might be enough to put major pressure on Miami and Buffalo atop the AFC East, and push deep into the playoffs.

The next step for Wilson is much more difficult to predict. The obvious answer is they’ll try to find a sucker to pawn him off on, much as they did with Sam Darnold — but it’s questionable where there will be a taker. Who believed in Wilson before the draft? Who still believes in him after 1.5 years of mediocrity? Who would make a deal for him in the time leading up to a QB-heavy draft? This might be putting the cart before the horse, because maybe this benching in the kick in the ass Wilson needs and he’ll wake up, but we really could have seen his last snaps as a starter for the Jets.

New York is now onto bigger and better things. If the offense can delivery even half of what they did against the Bears then this team has the talent to make it all the way to the Super Bowl. Laugh at that if you want, but it means you haven’t seen just how good this defense is.

It’s hilarious to see an NFL playing rolling across the plane line he’s in a fire drill, but aside from that It was a big game for Darnold. Not only was he making his return from injury for the first time, but this was a chance for a statement game. Darnold was replaced by Baker Mayfield in the offseason, and a sham QB “competition,” from Matt Rhule, which was never a competition at all, settled Darnold as backup. He got hurt, and watched as Mayfield sucked out loud — and then he comes back on Sunday and convincingly beats Russell Wilson.

The rest of the season will be interesting to see from Darnold. Don’t get me wrong, he’s not a starting-caliber QB — but he could transition into a having a long career as a backup. That’s more than you can say for Mayfield.

Loser: Tom Brady, and this whole thing getting sad

I’m not a giant Tom Brady fan. I absolutely respect his football talents, and the abilities he’s shown which will absolutely cement him as the GOAT for a long time until someone (if anyone) comes to supplant him. That said, I just tend to like players with more personality, and he’s about as interesting as a cardboard box to me.

Despite all this, we really didn’t need this to be the end of Brady’s career. It’s sad as hell, and each week is worst than the last. The Buccaneers suck, Brady just lost his 218 GAME streak of winning when up by 7 or more with two minutes to go, and this is all such a damn shame.

Brian Robinson said his friend has a “big hat” company. “If you want a big hat, let me know.” pic.twitter.com/KXm3GCJWO1

I am a huge fan of this Big Hat. I don’t know if I’d ever wear a Big Hat, but conceptually I am obsessed with people who want a big hat. I know it’s probably so they can hide drugs, but I like the idea of turning your hat into a vessel for tons of different stuff. Fill it with popcorn for the movies, cosplay as Toad, keep your loose change in there before you can get to a CoinStar... the possibilities are endless.

I do feel a little for Brian Robinson. He doesn’t look too thrilled about Big Hat, and was doing his friend a solid. Someone should only wear Big Hat if they believe in Big Hat ... nothing more or less.

I will continue to make references to the Broncos as losers until something improves.

Spoiler: Nothing is improving.

Winner: The Commanders (on the field only)

I hate that we have to make this distinction, because on the field Washington has fast become one of the hottest, most fascinating teams in the NFL. Don’t get me wrong, they’re not going to win any championships — but Ron Rivera has been doing remarkable work and the defense in particular is flourishing.

That “on the fields” caveat is important, because off the field Dan Snyder’s team is doing shit like this.

This is the laziest, most pathetic, “completed my homework on the bus” ass memorial possible. It’s basically a Kohl’s mannequin with a bunch of mismatched football gear on it, which was probably pulled from a reserve equipment closet. Except for the cleats, which came from the World Cup?

Bruh....it's hysterical how bad they are at this

They are using Adidas World Cup cleats, you can see it says "World Cup" underneath the shoestrings on the right cleat https://t.co/N4CPG7W4AI pic.twitter.com/OqtAv5I01x

What a joke and an insult to Taylor’s memory. God, I can’t wait for that team to be sold.

Good news Jaguars’ fans, your team didn’t ruin Trevor Lawrence. Seriously, it took some time, but we’re now seeing the promise Lawrence had when he was a lock for No. 1 pick in 2021. The dude has been fantastic in recent weeks, and straight up put the Jaguars on his back in Week 12 to get the win over the Ravens, a game Jacksonville really shouldn’t have had a chance in.

Lawrence finished with 321 yards passing and three TDs, all with a tidy and efficient 29-for-37 passing. He has arrived, and now the team just needs to build.