If there were ever a juxtaposition between two hockey rivals at one time, you really have to look no further than the Pittsburgh Penguins and the Washington Capitals right now. That's perfect timing for the first episode of HBO's 24/7 Penguins-Capitals: Road To The Winter Classic, which debuted Wednesday night on HBO.

The first episode chronicled the last few games for each team, beginning with action early last week as each team took on the Toronto Maple Leafs. For the Caps, that Monday loss to Toronto was the third in what's turned into a seven-game losing streak, but things didn't get really bad until their next game: a 3-0 home loss to the Florida Panthers.

It's probably not good when your coach walks in after a game and says "hey, have a seat for a second." Warning, this video is not safe for work -- unless your work involves lots and lots of swearing.

Apparently things aren't going so well in Washington. But in Pittsburgh...

Again, not too safe for work. Just go with the assumption the rest of the way out.

For the uninitiated, Deryk Engelland took on Colton Orr. A tough guy? One of the toughest in the league.

If there's anything the first episode was able to do successfully, it definitely highlighted the differences in the teams right now. Surely, both teams are just as outgoing and as fun as the other -- as highlighted by, uh, Alex Ovechkin shaving in his underwear without shame -- but there just isn't much fun surrounding the Caps right now.

While their coach is launching F-bombs at them like profanity is change and the Caps are a Salvation Army bucket, the Penguins are busy throwing Christmas parties, playing video games on the plane and forcing Paul Martin to grow his 'stache, since apparently he can't score a shootout goal.

All of this leads up to the one huge issue I had with the end of the show. The HBO narrator, who I wish could follow me around and talk about my life, went on at the end of the show about how the Caps and Pens symbolize the typical ebbs and flows of the NHL season.

That's the thing -- a 7-0 loss to the Rangers, for these Washington Capitals, is not a typical ebb in the season. A 12-game winning streak, even for these Penguins, is not part of the typical flow of the season. These are abnormal times for both of these teams.

- If you're going on a date with an HBO camera, don't you think you'd look in the mirror to make sure you finished lunch first? Bruce, meet napkin. Napkin, Bruce. 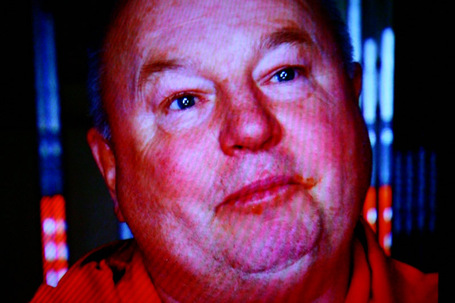 - Also, is Coach Boudreau dyslexic? On several occasions, usually in an angry fit of rage, he mixed up his words a bit. "Basket in the biscuit" and "asses in heads" were just a few gems.

- Maxime Talbot isn't really a superstar outside of Pittsburgh. Man, that guy should be. His comment to Matt Cooke's kid during the Pens holiday party was pure gold. Something about how the kid speared him, oh, but that's to be expected. It's Matt Cooke's kid.

- Pascal Dupuis, typical family fan. Four kids, a wife, a few dogs. And some of the most dry humor you'll ever encounter.

Quote of the night? Tough to pick just one. That's certainly in the running though.

Coming next week: the Penguins 12 game win streak is snapped in Philadelphia, and the Caps keep on losing while Boudreau's name is mentioned as on the hot seat. Expect more swearing, and perhaps less sauce.