It was a wild year in hockey on and off the ice, with ownership strife, historic comebacks, unbelievable contracts and a Golden Goal highlighting the top stories of 2010.

It's been a wild year in the world of hockey. From ownership issues, to miracles on the ice, to financial woes to dramatic free agent signings, the NHL has seen its fair share of excitement in just about every aspect of the game.

The Chicago Blackhawks erased 59 years of frustration with a Stanley Cup, the Phoenix Coyotes shocked the hockey world by making the playoffs despite every possible obstacle, Steven Stamkos emerged as a true star in the NHL, an attendance record were broken in Germany during the World Championships, which was then broken again in Michigan just this month and Sidney Crosby has shown all year long why comparisons to Wayne Gretzky are more than deserved.

Before we get to the top five stories of 2010, there are a few honorable mentions worth, uh, mentioning. The hockey world will never forget the story of Brendan Burke, the brave son of Toronto Maple Leafs GM Brian Burke who became a role model for likely thousands of homosexual hockey players. Burke died in a tragic car accident in February at the age of 21.

We'd be remiss without mentioning the Colin Campbell emails, which rocked the establishment late this year. Campbell and the NHL brushed aside the controversy without much backlash, but it gave fans a glimpse into the personalities that run the NHL. 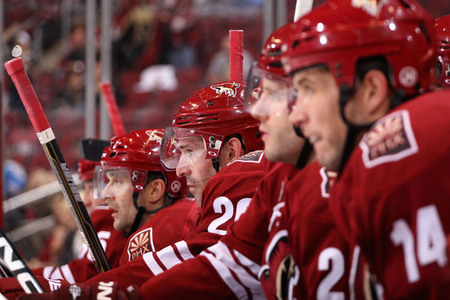 The story of the Phoenix Coyotes really began well before 2010, but the saga really came to a head, and ultimately a resolution, in the past year. Through the dishonesty of their owner, Jerry Moyes, to the plans to sell the team to an owner who would move the team to Canada, to the NHL takeover of the team, to the sudden success on the ice despite financial turmoil off it, the Coyotes' story would have been a perfect addition to the Major League trilogy of movies.

Moyes lost the team in bankruptcy court last year and the NHL took over, but as Gary Bettman and the League tried to find an owner to take the club off their hands, they continually struck out. It seemed that the only owners willing to purchase the team were ones that wanted to move them back north to either Southern Ontario or Winnipeg, and that the owners who wanted to keep them in Glendale were just financially unable to close the deal.

So fans and players waited while the financial nonsense worked itself out, and credit to the team, they had their best season in franchise history in 2009-2010. As a reward, finally, just a few weeks ago, the City and soon-to-be new team owner Matthew Hulsizer agreed to terms on a lease. The Coyotes are staying in Glendale, and they hopefully won't ever have to pull clothes off of a lifesize cutout of Hulsizer.

In chatting with a bunch of other people before putting this list together, I got a lot of backlash for thinking about putting this one on the list. Admittedly, I'm a Flyers fan, so I'm clearly biased here. But in reality, the Flyers comeback over the Bruins (or Boston's choke-job against the Flyers, however you want to put it) was one of the most historically important moments of the year -- in a year where "History will be made" was the NHL's playoff slogan.

It was, for all intents and purposes, the greatest comeback in the history of sports. We were all alive in 2004 when the Red Sox performed this feat against the Yankees (unless you're a six year old), so we all know how rare a feat this was. It's happened three times in hockey now, but not since 1975, and only four times in the three major sports that employ best-of-seven series formats. That's four times. Ever.

The series turned in Game 3, actually, when Mike Richards of the Flyers knocked David Krejci out of the rest of the playoffs with a vicious center ice hit. Boston would win that game, but the loss of Krejci proved to be huge. The Flyers squeaked by in Game 4 with an OT goal, then shipped up to Boston for Game 5. Goaltender Brian Boucher suffered a knee injury, so Michael Leighton, in his first game on the bench since an injury in March, suited up.

The Flyers rolled in Game 5, came home for Game 6 and forced Game 7 back in Boston. The Bruins seemed to simply not care what the Flyers had done in tying the series though. Completely against the narrative, Boston came out and quickly developed a 3-0 lead in the first period of Game 7. Then, completely with the narrative, Philly roared back to even the score at 3-3 in the second period. A third period power play goal by Simon Gagne would win it, and the Flyers moved on to the conference finals.

Down 3-0, twice, before winning the series. The best comeback in recent pro sports history deserves a spot on this list.

3. Chicago Wins The Stanley Cup, Then Gets Rid Of Half The Team 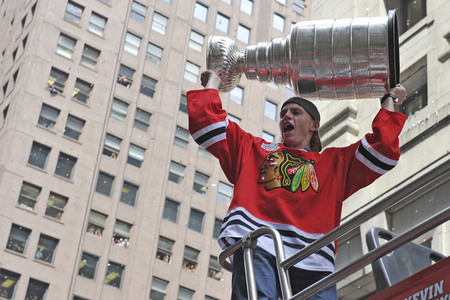 The Chicago Blackhawks won their first Stanley Cup since 1961 this year, and while you're probably saying "oh, a team wins a Stanley Cup every year, why's that a big story?", it's the way they did it that needs to be remembered.

The Blackhawks of 2010 might prove to be a model that other teams choose to follow in this salary capped era of the NHL. Knowing that they were in salary cap hell for the next season with overages and bonuses to be tacked on to the 2010-11 campaign, they decided to just go with it. It paid off and they won the Cup (and Jonathan Toews winning the Conn Smythe meant more bonuses and more cap problems), but immediately afterward, they had to start making moves.

Major cogs in their run to the title were forced to leave town. Dustin Byfuglien, Ben Eager, Brent Sopel, Kris Versteeg and Andrew Ladd were all traded away over the summer. Goaltender Antti Niemi was let go, as was fourth liner Adam Burish. Their chances of winning another Cup were severely hurt in the process, but was winning the 2010 Cup worth it? 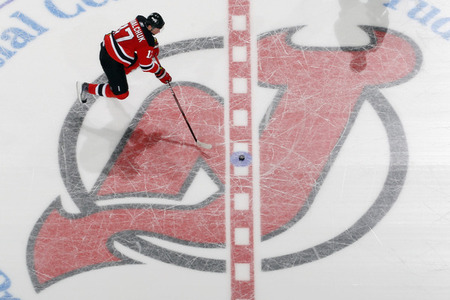 Basketball had LeBron, hockey had Ilya. It was the most dramatic free agent signing process we've seen in years in the sport, as Ilya Kovalchuk decided to shun offers from places such as Los Angeles to stay in New Jersey with the Devils, the team that acquired him at the trade deadline to bolster their chances at a 2010 Stanley Cup.

That, of course, didn't happen. Lou Lamoriello and the Devils still believed Kovalchuk was a key piece in their future, however, and they signed him to a 17-year, $102 million contract that was considered a mockery of the salary cap. The NHL rejected the contract, but worked with the team to create a deal that would be acceptable under the rules.

Eventually, in September (a full two months after free agency opened), the NHL accepted a new 15-year, $100 million deal, but not before forcing the NHLPA to accept new rules that govern long-term contracts. Then, the League took $3 million and two draft picks from the Devils. Don't try this again, kids.

The bigger part of the story that nobody saw coming, however, was the complete implosion of the Devils after the signing. As it stands on Christmas Eve, they are the worst team in hockey. Kovalchuk can't score, the team is riddled with injuries and their coach has been fired. Things surely can't be blamed on Kovalchuk alone, but it is rather ironic that an organization like the Devils has fallen in this way.

The Devils have always been so dedicated to the system, never an individual player (well, besides Martin Brodeur) or any sole operator of that system. The first time they change philosophy and throw their money and their trust behind one individual player, the wheels fall off the bus. Who saw that coming? 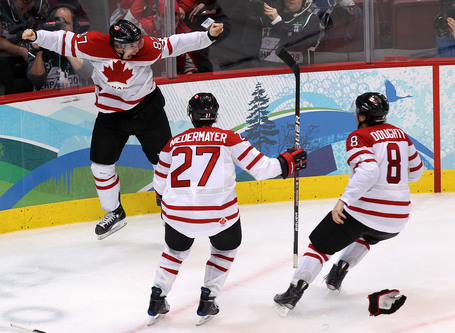 Canada had won seven Olympic gold medals in their history prior to 2010, but none of them had ever come on home ice. That all changed with one Golden Goal in Vancouver this February. Sidney Crosby beat USA's Ryan Miller along the near post in overtime of the gold medal game to give Canada the one medal they really wanted at these Games.

Canada, once again, proved its dominance in the sport of ice hockey. They are the crown jewel, the standard to which all are compared. The subplot of the Olympic win for Canada, though, was the rise of American ice hockey. USA beat Canada in the World Junior Championships, also on Canadian soil, in January of 2010, and hopeful American hockey fans thought that a clean sweep of the standard bearers could be had.

That wasn't to be, but America's win at the WJC's and their valiant effort in Vancouver officially put the red, white and blue on the map as a hockey power. The Canada-USA rivalry in hockey is just beginning, but it will be a top story for years to come.