You Thought Ice Was Bad In Florida? Romanian Team Forfeits Game Thanks To Bad Ice

Share All sharing options for: You Thought Ice Was Bad In Florida? Romanian Team Forfeits Game Thanks To Bad Ice

Ask an NHL player which arena has the worst ice and the answers nearly always center around the Florida teams, Dallas and San Jose. The searing heat combined with extreme humidity make life very difficult for the ice crews in these towns.

In fact, in 1996, as the Florida Panthers worked their way to the Stanley Cup Finals, multiple opponents called the ice in Miami Arena the worst they'd ever seen.

Though a bit slushy, it was at the very least solid enough to play hockey (and clean up pests). 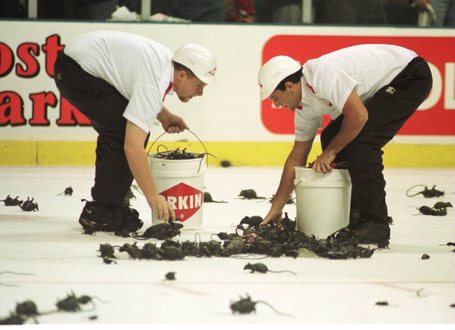 If you thought that was bad though, the Panthers and their rats have nothing on some conditions in Romania.

Two weeks ago, Steaua Bucureşti was scheduled to play a game against Budapest-based Ferencvaros TC Orangeways in a MOL Liga game. The MOL Liga is a joint league made up of six Hungarian and three Romanian teams, and games played in the MOL Liga count towards the OB I bajnokság Hungarian championship, but not the Liga Nationala de hochei Romanian championship.

On this night in Bucharest, however, there would be no hockey. One of the compressors at Steaua Bucureşti's home arena Pationarul Mihai Flamaropol failed, and they were forced to forfeit the match against due to poor ice conditions. Steaua Bucureşti did not appeal the decision and the governing body awarded the victory to Ferencvaros TC Orangeways with a final score of 5-0.

Get your international hockey knowledge up over at Puck Worlds.