Let's be honest here: Madison Square Garden might be The World's Most Famous Arena, but it's certainly not the World's Best. It's pretty crappy, actually, especially for hockey.

The seats don't come down to the glass all the way, the lighting is pretty poor. The ice surface is one of the worst in the league, which is what happens when you put a frozen surface several stories off the ground above a train station.

It's just much less than ideal, and the only true redeeming qualities it has are the consequence of the fans that fill it and the location at which it sits. One summer-long renovation is complete, with just changes to the upper deck left to occur next summer, and it appears the arena is already looking better for hockey.

Here's a video from practice today via NHL.com, the Rangers first foray into MSG this season. They've played every game on the road thus far and will make their home debut on Thursday night against Toronto.

Some of the same problems still exist. That whole if-you're-sitting-in-the-first-row-you're-not-against-the-glass thing always bugged me and they didn't seem to fix it, but the lower seating bowl does look much, much better now. They've also added some suites at ice level, with more to come elsewhere over the next two summers, and the concourses are reportedly much wider. That was always a problem at MSG.

The locker room is new, which honestly doesn't matter unless you're on the team or in the media. But overall, it seems to be a much better experience for both players, fans and media alike. Honestly, though, my favorite part of the new-look MSG has nothing to do with renovations.

It's just something that could've been done all along. The Rangers have the sexiest center ice design in the league, and I don't even think it's close. 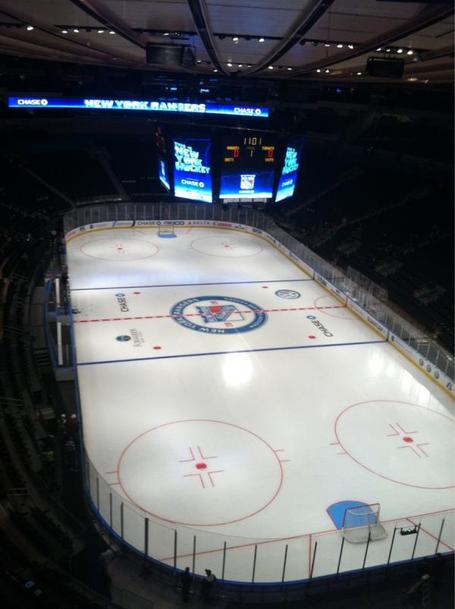 For more on the Rangers, check in with our blog Blueshirt Banter.