Someday, jokes about New York Islanders goaltender Rick DiPietro will get old, but while he's still on a million-year contract and he's still messing up his knee during All-Star Skills Competitions and he's still breaking his face thanks to weak-hand punches from opposing goaltenders, those jokes aren't going to get old.

And thus, here's the story of how Rick DiPietro picked up a loss without even playing a second of hockey.

Evgeni Nabokov was quite good in between the pipes on Thursday night for the Isles, making 30 stops and getting the game to a shootout with the Pittsburgh Penguins. It was then that he apparently could not go on, and coach Jack Capuano had to make a change.

The notion that Nabokov doesn't like the shootout was quickly dismissed there by Capuano. Still, Lighthouse Hockey thought it was all very strange.

Rewatching the tape between OT and the shootout, both Nabokov and DiPietro are in good spirits, joking around, and possibly even discussing, "Hey, I'm tired, this is a groin-busting, hip-shanking lark. Wanna play?" As Capuano discusses things with the ref, he gives Nabby and DiPietro the signal and walks away as an excited DiPietro quickly stretches. Weird. Like, goalie weird.

Let's look at that tape. Still images only, but here's the scene just seconds before the shootout was to begin. In fact, at this point Kris Letang of the Penguins was already at center ice waiting to go. This was the scene at the Isles bench: 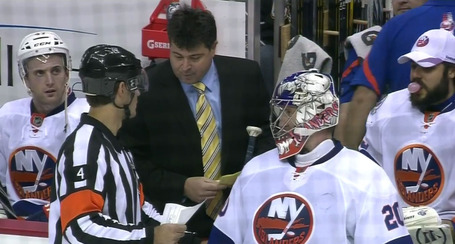 That's Capuano handing off the shootout lineup to the official, DiPietro blowing a bubble on the bench and Nabokov standing there apparently ready to go. Then, the coach looks at DiPietro, then at Nabokov, says something, DiPietro shrugs his shoulder a little, and before we know it... 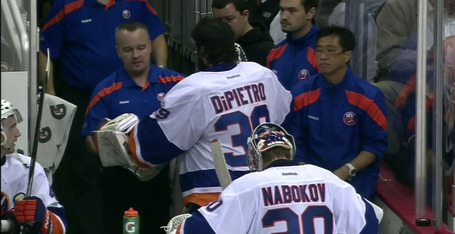 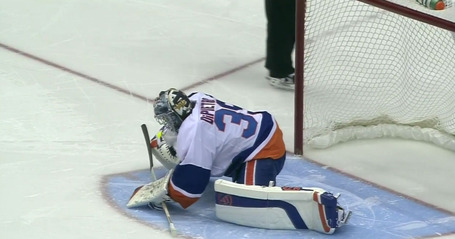 There he is. In the game. His first action of the season, actually, and it doesn't even count as a minute played in the game. He made the first stop on Letang, too, but on Evgeni Malkin's chance, he just barely missed with the poke check and gave up the goal. Not his fault, really. Malkin's just crazy good at hockey.

He challenged James Neal well in the third chance, but the Isles couldn't put anything by Marc-Andre Fleury at the other end, and the Isles lost. So did DiPietro, who now has a stat line of 0-0-1, .000 Sv%, 0.00 GAA, 0:00 TOI. This could only happen to Rick DiPietro.