With Successful All-Star Weekend, Raleigh Proves That NHL Hockey Can Work In The South

Hockey in the South is a constant punch line for fans in the colder climates of the Northeast and Canada -- you know, where hockey "belongs." Raleigh, the Triangle and the Carolina Hurricanes proved to us this weekend that hockey can work there.

Share All sharing options for: With Successful All-Star Weekend, Raleigh Proves That NHL Hockey Can Work In The South

When you step in to the RallyPoint Sports Grill in Cary, N.C., the first thing you see is a giant red wall, adorned with a hand-painted Carolina Hurricanes logo and a plaque celebrating the 2006 Stanley Cup.

When you turn your head, step over and take a seat at the bar, you look up and see NHL Network on the giant HD television hanging on the other wall. Folks chat about Jeff Skinner, the local hero who was referred to as hockey's Justin Bieber all weekend. They talk about Alex Ovechkin winning the breakaway contest on Saturday night and how the fans that voted totally messed up that pick.

They're talking hockey. In North Carolina. Wait, isn't this the South?

In a town plopped between N.C. State, Duke, UNC and plenty of other Division 1 colleges, you can't find one piece of memorabilia from any of these schools anywhere in this local bar, aside from a tiny pennant in a back corner celebrating one of Duke's million national championships.

Instead, the focus here is on the local hockey team, the only major league professional sports team within 100 miles. Maybe it's because the entire hockey world is focused on the area known as the Triangle on this All-Star Weekend, forcing fans to care about a sport and a team that they'd usually ignore.

I'd like to bet that the hand-painted Hurricane will be there for a little more than just three days, though.

For a long time after their arrival in North Carolina, the Hurricanes weren't exactly successful. They first played 90 minutes away from Raleigh in Greensboro, an area that refused to support a team that was preparing to move down Interstate 40 in just a few years. 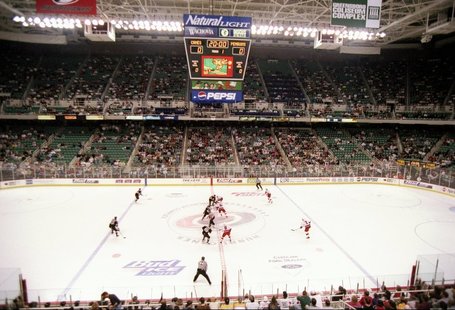 Fans stayed home, games weren't on television and hockey was an after-thought. But after the move to the brand-new Raleigh Entertainment and Sports Arena - now the RBC Center - in 1999, hockey and the 'Canes began to gain a foothold. You can probably point to the 2002 playoffs, the 'Canes surprising run to the postseason, and perhaps most of all, the Miracle at Molson, as the beginning of Carolina's love affair with NHL hockey.

Despite losing in the Conference Finals to Toronto that year, sports fans in the Triangle began to notice the Hurricanes. Tailgating, something Carolinians know how to do perhaps better than anybody in the United States, became a staple of hockey days and nights in Raleigh. The party atmosphere that surrounds N.C. State football at Carter-Finley Stadium moved across the street for 'Canes games.

Raleigh hosted the NHL Draft in 2004 and the Hurricanes won the Stanley Cup in 2006, further cementing hockey's presence in the area. They had a winner, something certain Northern markets hadn't been able to boast for 30 or more years, and they were proud of their winner. 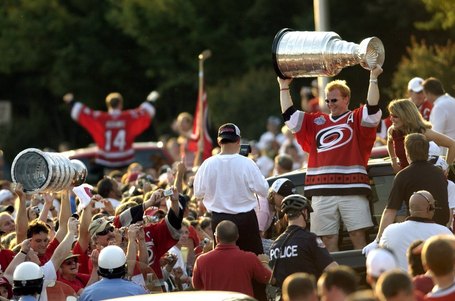 This weekend, as the "Caniacs" welcomed the hockey world to what they proudly call "the loudest house in the NHL," it was time for their coming out party.

Thanks largely to the persistence of owner Peter Karmanos, the Hurricanes and their fans have built something special here over the last 11 years. They did it up this weekend unlike any other American city has done in recent years for an event like this.

From the signage literally everywhere you looked in the Triangle to the hundreds of people scattered downtown in hockey jerseys to the temporary ice rink set-up (it was 60 degrees on Sunday) to the fireworks show on Friday night, the people in Raleigh took complete advantage of their opportunity to go big this weekend, proving to the hockey world that yes, they are a hockey town.

Cam Ward knows this. A transplanted Canadian that's made a home in the Triangle, he couldn't have been prouder of his new city.

"I think it was great for the players and the fans from out of town that came in to be able to see how hockey is down here in the South. And I think they're going to go home with a different perspective on Raleigh and the game in itself, because it was just a part at that and entertainment, really.

"I think [out-of-towners] were probably surprised with the response that the community had given this event. I think for us we felt the energy, the buildup coming into this weekend. It was being around the community, talking about it, the fans have been excited, and then they delivered."

"It was awesome. I'm very proud of our fans and how they showed their support for this event and came out in throngs and were tailgating and doing all the things we know they do."

Unfortunately, a lot of Southern markets aren't like this. It's Gary Bettman's inconvenient truth. But if we can learn one thing from the Raleigh success story, it's that we can't simply give up on these markets after 5 or 7 or 10 or even 20 years. It took 11 years - and despite the success of this past weekend, still counting - for hockey to become part of the local sports culture here.

Hell, in Philadelphia and Pittsburgh and St. Louis back in 1967, fans embraced hockey a lot like the Triangle did in the mid-90s. Forty years later, those three cities are some of the most important on the hockey map.

We're quick these days to look at empty arenas in Florida and Phoenix and Atlanta and elsewhere and think, "Well, that was a fun experiment, but it's time to get back to reality."

Well, no. We can't be so quick to act. We can't just give up on a place simply because it's warm there or it's a "non-traditional" market.

Sure, hockey won't be successful everywhere. It takes a strong dose of good fortune on the ice and financial stability off of it, which can be a catch-22 when fans aren't on board from the start. With talks of Winnipeg and Quebec City in the news more than ever now, though, there's been a large shift in the status quo that's been pretty negative towards hockey in the Sun Belt.

If we take anything away from the amazing show that Raleigh and the Carolina Hurricanes put on for us this weekend, it's that the model can be duplicated elsewhere. With a little luck, there's no reason a bar in Scottsdale or Glendale or Tempe can't have a giant hand-painted Coyotes logo on their wall in a few years. 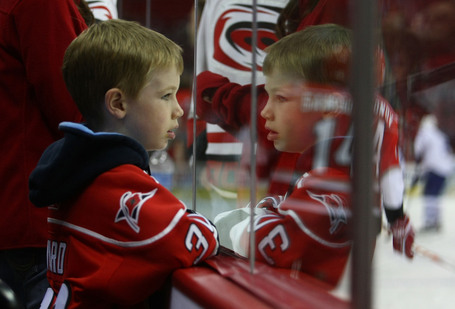 For more on hockey in Carolina, visit our Hurricanes blog, Canes Country.