Islanders, Penguins Combine For 346 Penalty Minutes In Yet Another NHL Brawl

Share All sharing options for: Islanders, Penguins Combine For 346 Penalty Minutes In Yet Another NHL Brawl

Before tonight's game between the Penguins and Islanders, New York tough guy Zenon Kenopka told MSG that he was looking forward to tonight. He and his teammates knew it was going to physical thanks to what happened last time these two teams met, but at the same time, Kenopka talked about how the Isles had to be smart. They had to let the game dictate what would happen.

So when the Islanders jumped out to a huge 6-0 lead in the second period, the game dictated mayhem. Absolute mayhem that ended with at least 346 penalty minutes. The score sheet on NHL.com was still updating well after the game had ended.

This sucker punch from Matt Martin on an unaware Max Talbot was just the start.

Wait, but what did Talbot do?! The Isles' broadcast talked about payback for a Talbot hit on Blake Comeau in that previous meeting a week ago -- one that Comeau has yet to return from. Yep, there's no time for payback like when you have a 6-0 lead.

Oh, but that there was only the start.

It all started up again in the third when NYI's Trevor Gillies took a run at Eric Tangradi of the Penguins, who was called up today to replace the injured call-up Dustin Jeffrey.

Tangradi hit his head hard against the glass and seemed dazed as Gillies rained blows down upon him. All hell broke loose yet again.

Okay, let's try to make sense of that. Gillies hammers Tangradi and then everybody partners up. The only other fisticuffs that break out are between Talbot and Micheal Haley, who has 144 penalty minutes this season in the AHL. Haley obviously handled Talbot, and then decided he'd go after Brent Johnson. You know, payback for breaking Rick DiPietro's face.

And then, yes, you saw that correctly. Eric Godard jumped off the bench to assist his goaltender Johnson. Talbot and Jack Hillen come down the ice and get involved, but that's really the end of it there.

The fighting didn't completely stop at that point, but it certainly tailed off. Hell, the Penguins only had two players on their bench when all was said and done, so even if they wanted to keep at it, they didn't really have much of a choice. The four Islanders who remained on the bench poured off to congratulate Mikko Koskinen on his second NHL victory.

The final score was 9-3. (like that really matters). Here's a look at the final box score, which I'm hoping is finally updated now that the game has been over for 30 minutes. No guarantees, though, on a night like tonight. 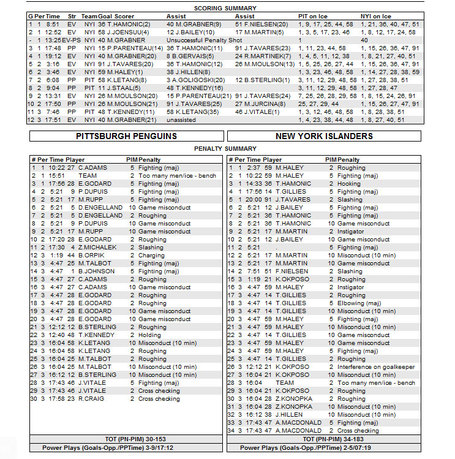 Combine this mess with what we saw the last time these teams met and what we saw in Boston between the Canadiens and Bruins on Wednesday night and we have to ask ourselves: Who set the Delorean to 1975?