The 2003 draft class is considered one of the best in NHL history. Look at some of the names: Marc-Andre Fleury, Dion Phaneuf, Eric Staal, Zach Parise, Thomas Vanek, Mike Richards, Dustin Brown, Ryan Getzlaf. The list goes on.

Of the 30 players selected in the first round of that draft, every single one has played a game in the NHL, with most having played over 150 games in the league. Over these last eight years, though, there's been one glaring exception. He was selected 12th overall that year by the New York Rangers, and his name is Hugh Jessiman. 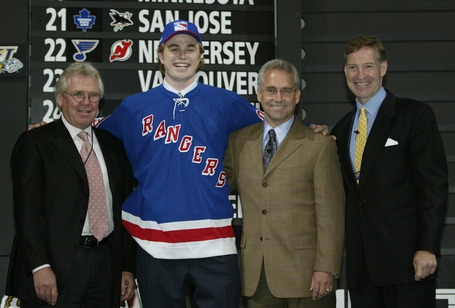 Jessiman certainly had a stretch of bad luck that led to his failure to crack the Rangers' NHL lineup. After two and a half years at Dartmouth College, Jessiman suffered an ankle injury that kept him out of the Big Green lineup for the rest of his junior season. After rehab, he made the jump to the pros, hopping between the Hartford Wolf Pack of the AHL and the Charlotte Checkers of the ECHL for several seasons.

Ultimately, in October 2008, he was traded to the Predators organization for essentially nothing. He was a 20-goal scorer with the Milwaukee Admirals of the AHL for two seasons before they let him walk, and this season, he was traded from the Chicago Blackhawks organization to the Florida Panthers organization in the Michael Frolik-Jack Skille trade.

Having played 10 games with the Rochester Americans of the AHL, Jessiman is now an NHLer. George Richards of the Miami Herald reports that he'll play tonight against the Devils. Nevermind that the Panthers are essentially the Amerks these days -- you won't be getting Jessiman down today.