In 2004, the NHL went into lockout mode and killed an entire season. With the NFL entering into critical mass CBA negotiations, things feel eerily similar. In this game, nobody wins.

I'm not an NFL fan by any stretch of the imagination, but it's difficult to avoid NFL CBA news anywhere you go. From the web to the radio to even the local news, everyone is reporting on the potential NFL lockout, and it's giving me nauseating flashbacks to the black period of 2004-05 -- you know, the NHL Season That Never Was.

Those flashbacks aren't an exaggeration. When I hear reporters quoting sound bites on news updates, the rhetoric is so similar that I've had to do double-takes. In fact, I don't think you can really tell the difference between who's said what, NFL now or NHL then

Here are nine quotes taken from the current NFL negotiations and the NHL lockout period. See if you can distinguish the two.

Obviously, the NHL was at a different sort of crossroads when the lockout occurred. The NFL is North America's biggest league with $9 billion in revenue, while the NHL is the continent's No. 4 sport (though according to a recent survey, coming up close behind the NBA) with $2.7 billion in revenue last season -- and that's after year-by-year growth. The NFL already has a salary cap while the NHL entered into negotiations seeking "cost certainty."

This thing, obviously, is still about money -- the proverbial millionaires vs. billionaires. And as I watch the local news with my morning coffee and cereal, I hear a lot of the same things I did back in 2004 and 2005. Talks about local economic impact, anger at both sides for being greedy, lost jobs and so on were common then and they're common again now. 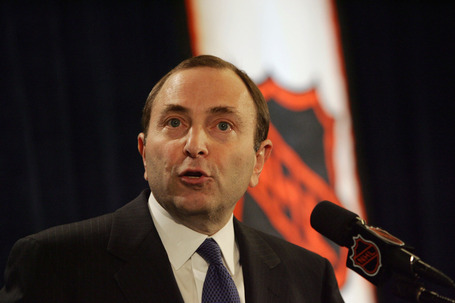 You'll hear more of that this summer when the NBA and its Players Association go through the same song and dance, and in a worst-case scenario, us hockey fans might have to deal with it next summer with the NHL's impending CBA negotiations.

A few months ago, there was talk about how a potential NFL and NBA lockout could benefit the NHL. After all, highlight shows and sports websites have to report on games of some sort, and if two of the three winter leagues aren't in session, the spotlight would (somewhat) be focused on the only remaining one. Since I'm not a football or basketball fan, the selfish part of myself thought that this would be a good thing and I was all for it.

Now that we're in the middle of the actual negotiations for the NFL, I can't help but retract that sentiment. All of this rhetoric invading my morning coffee just reminds me how awful it was to let a game be ruined by economics and stubbornness. That's outside of the real impact of things like community moral, local jobs, economic game-day benefits and so on.

From a fan perspective, I almost feel like the guy who's already gone through a terrible divorce and now has to watch his brother do the same thing. 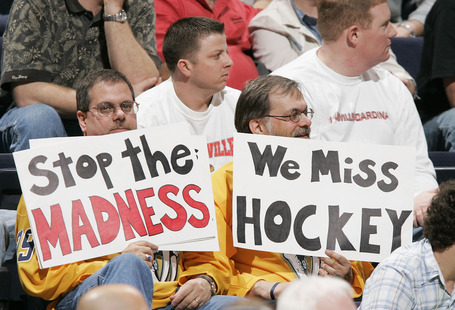 It's very short-sighted to say that an NFL and/or NBA lockout will be good for hockey fans. Lockouts help no one. Lost seasons help no one. And while the NHL may be better off for having the giant reset button hit back in 2005, I'm in the camp that says the ends certainly don't justify the means -- that there are simpler and less stubborn paths to common goals.

The danger here is that the NHL set a new precedent by blowing up the 2004-05 season -- a tactic that is apparently being advised to NFL owners by NHL executives if they really want to get what they want. Theoretically, there are all sorts of other avenues any sports league can take to dig their heels in and get what they want during the collective bargaining process. It doesn't matter what the sport is, as the Precedent Of Bad Decisions gets raised, every fan loses, every city loses, and every league loses.

You could say that the NHL is the perfect example of how a league can rebound even stronger following a total disaster. I say that these things don't come with collateral damage. When I was a kid, I lived and died with the San Francisco Giants. Even after I discovered hockey in the later 1980s, baseball was still near and dear in my heart. It was a 1A and 1B tandem for my sports allegiance.

After the MLB strike canceled the 1994 World Series, something just changed in my sports fandom. I still like baseball and I still follow my Giants, but that obsession simply melted away. I learned to live without it and it never returned. I know I'm not the only one who's experienced this, and I'm sure there are ex-hockey nuts that say the same thing.

Is it worth it? League bean counters may dismiss this as a negligible loss, but I'd like to hope that the heads of every league do consider the human factor into decisions like these.