Why These 5 Rookies Should (And Shouldn't) Win The Calder Trophy

Share All sharing options for: Why These 5 Rookies Should (And Shouldn't) Win The Calder Trophy

With the end of the regular season just a month away, the race for the Calder Trophy is wide open. Fresh-faced forwards, reliable defensemen and surprising goaltenders have all made a case for why they are this season's top rookie. Like most Calder races, there in no clear-cut favorite. Each player has his positives and negatives, his advantages and disadvantages.

Even trying to narrow the list of candidates is difficult this season. Goaltender Sergei Bobrovsky pushed the Flyers to the top of the NHL standings before fading as the season wore on. Capitals blueliner John Carlson has admirably filled an important role despite Washington's up-and-down campaign. Boston's Brad Marchand has combined scoring with solid defensive play to help the Bruins to the top of the Eastern Conference. And first overall pick Taylor Hall has improved as the season has progressed, but a late-season injury has derailed his come-from-behind efforts. P.K. Subban, Jordan Eberle and Derek Stepan have all had solid first campaigns.

Here's a closer look at my top five candidates for the Calder Trophy, and why they will or won't take home rookie of the year honors. 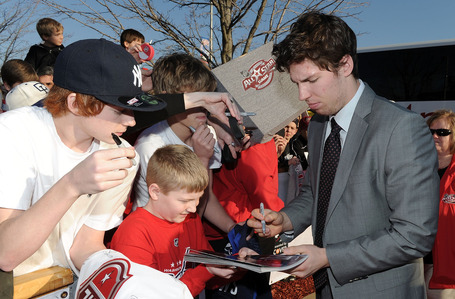 Why he should win: On a team loaded with talent, Couture is only one goal shy of the Sharks' team lead with 25. He is also second among all rookies in goals. His eight game-winners are among the best in the NHL, and his plus-17 is far and away best on San Jose. He has been an absolute road warrior, registering 31 of his 44 points away from home through March 7. He is winning 52 percent of his rookie-high 654 faceoffs.

Why he shouldn't win: On a team riddled with offensive talent, Couture isn't the focal point of opponents' defensive game planning. Outside of a 10-goal December, Couture has not scored more than four times in any month. In 27 San Jose losses, Couture has just eight points. With 25 games under his belt last season, Couture was one game shy of being ineligible for the award this season, a fact that could weigh on voters. 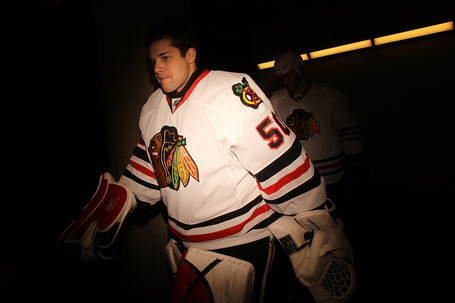 Why he should win: Since wrestling the No. 1 job away from veteran Marty Turco, Crawford has been able to help steer the Blackhawks back into the postseason hunt after it looked like they could miss the playoffs all together. His 2.19 goals-against average is third among NHL starters. He has run off eight straight wins in the thick of a hotly contested Western Conference playoff race.

Why he shouldn't win: The Blackhawks are surging with the help of Crawford, but not on his shoulders. The play of their captain, Jonathan Toews, along with a rejuvenated defense have been the main forces propelling Chicago into a more secure playoff spot. It's been a long time since someone as old as Crawford, 26, has won the Calder (Ed Belfour and Evgeni Nabokov were 25 in 1991 and 2001, respectively, and Sergei Makarov was 31 when he took the award in 1990), and the average age of the Calder winners since the lockout is 20. While he has played well against the league's top teams, he has mediocre numbers against lesser opponents. 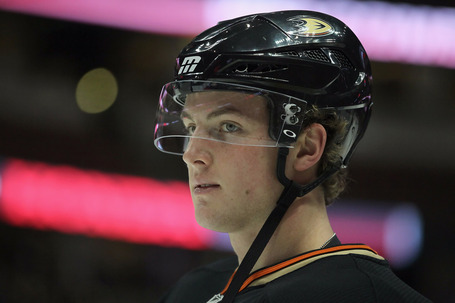 Why he should win: No rookie is logging more ice time than Fowler, who averages 22:41 a night on a team who has lost future Hall of Famers Chris Pronger and Scott Neidermayer over the past two seasons. His 16 power play points are tied for 20th among all NHL blueliners, and his 29 points put him in the top three of rookie defenseman scoring.

Why he shouldn't win: His minus-23 is worst among all NHL rookies and is in the bottom five of all NHL players. That's particularly startling when you consider that teammate Toni Lydman is among the NHL's leaders in plus/minus at plus-25. While Fowler logs big minutes, he has played just a shade more than 25 minutes shorthanded all season. Despite his decent frame, Fowler has been credited with just 36 hits this season. 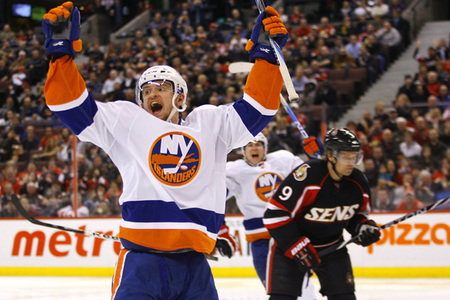 Why he should win: Through March 8, he led all rookies in goals with 27, and his plus-13 rating is the best on an Islanders team that has surrendered 28 goals more than they've scored. He's done most of his damage at even-strength, scoring just one power play goal and receiving just 45 seconds of man-advantage ice time per game. He has been a regular contributor on the Isles’ PK unit, which ranks 12th in the NHL. His three shorthanded goals ranks him among the league leaders. He's arguably the league's fastest skater.

Why he shouldn't win: The Islanders, simply put, are going nowhere this season. And while Grabner has had a great rookie season, he's just fourth on New York in points. He's done most of his scoring since the calendar flipped to 2011 with the Isles well out of the playoff picture. There's not a lot of grit to his game and he has just 14 assists. 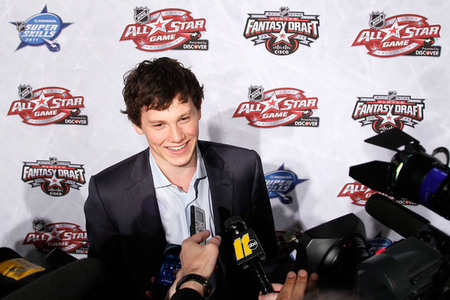 Why he should win: He leads all rookies in scoring with 49 points despite playing just 16:30 a night, less than the other three skaters on the list. He is second to only Eric Staal in scoring on an overachieving Hurricanes team, and he is often a central part in opponents' game plans. No player in the NHl has drawn more penalties than Skinner, whose unorthodox skating style and willingness to go to dirty areas in the offensive zone have resulted in defenders illegally impeding him. He hasn't backed down from anyone despite his smaller frame. He's the league's youngest player and his youthful exuberance rubs off on his teammates.

Why he shouldn't win: Skinner has scored most of his points against lesser teams and 16 of his points (and three-plus minutes of ice time) come with the man advantage. While he doesn't back down, he has shown flashes of frustration when teams target him physically. He doesn't contribute on the penalty kill and, while making strides, isn't yet totally reliable defensively, especially when he's played center. He's won just 36.4 percent of 154 faceoffs, contributing to Carolina's league-worst faceoff percentage.