Atlanta Thrashers Sale, Relocation To Winnipeg To Be Announced At Noon ET

Share All sharing options for: Atlanta Thrashers Sale, Relocation To Winnipeg To Be Announced At Noon ET

It's here, finally. After weeks of waiting to learn the official news, at 12 p.m. ET on Tuesday morning, the NHL will return to Winnipeg in the form of the relocated Atlanta Thrashers. True North Sports and Entertainment, the group purchasing the Thrashers from Atlanta Spirit Group, has called a press conference to announce the deal.

Any deal is pending Board of Governors approval from the NHL, but it's expected that's just a formality. The BoG meets next in late June.

The Winnipeg Free Press is reporting that the deal is not yet through, but that both sides, plus the NHL, feel comfortable enough to announce the deal today. It makes sense: the NHL doesn't want this taking away from the Stanley Cup Final, which begins Wednesday, and surely without an announcement, it would be the dark cloud hanging over the head of the entire league.

Of course, it's not completely avoiding the Final. Media day at Rogers Arena in Vancouver begins at 1 p.m. PT, and you know the reporters there will be buzzing about the Winnipeg news.

Winnipeg has been without the NHL since 1996, when their beloved Jets packed up and moved south to Phoenix. Since then, there's been a tumultuous relationship with the city, their fans, the league and many Southern markets, and the debate on whether or not the NHL belongs in the American South is one that still rages and will continue to rage, despite this move of the Thrashers.

It's a joyous day full of party in Winnipeg, while in Atlanta, fans are losing their beloved team that they've rooted for hard since 1999. It's easy to forget that sometimes, and just as Winnipeg fans lost their team 16 years ago, fans in Atlanta are experiencing the same. That's something that goes beyond geographic location.

We'll embed a live stream of the press conference right here, so be sure to stop on back at Noon ET for the announcement. Here's what True North's announcement looks like this Tuesday morning: 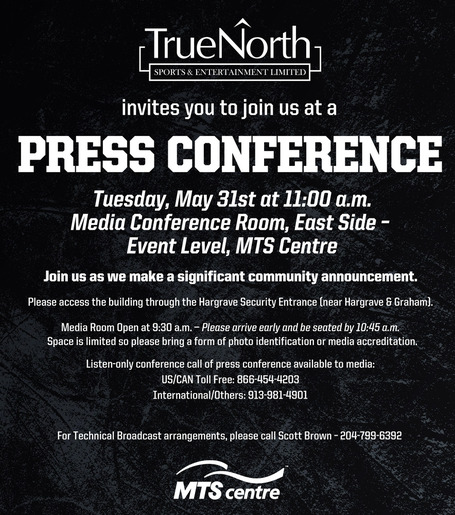 For more coverage on the move of the Atlanta Thrashers to Winnipeg, check SB Nation Atlanta's massive StoryStream, as well as coverage from our Thrashers blog, Bird Watchers Anonymous.