With the fourth pick in SB Nation's 2011 NHL Mock Draft, our New Jersey Devils delegation at In Lou We Trust has selected Sean Couturier, a center from the Drummondville Voltigeurs of the Quebec Major Junior Hockey League. 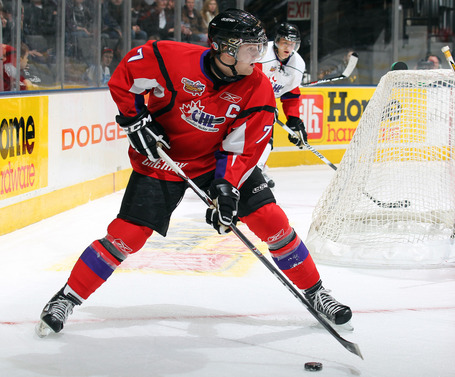 Here's how In Lou We Trust justifies their pick:

"There's a lot to love about Couturier as a player and prospects like him don't come around often unless you're picking high regularly in the draft. The main goal for the New Jersey Devils in this draft is to select an excellent talent they normally don't have access to. Couturier fits that bill to a "T." He's not just an offensive dynamo, he has a big body, he uses that body well, and he plays defense. Defense on top of offense!

He's used in all situations in Drummondville and he's proven that his production is no mere fluke. This combination is simply tantalizing and far too much to pass up because he might not be an all-world #1 center or that his skating isn't as good as his hands, vision, or awareness. It's because of this combination of what experts have seen along with the numbers that we selected him at #4 in the SBN mock draft."

Read more about Couturier at In Lou We Trust. You can also learn more about the Devils No. 4 overall pick in our Mock Draft with player profiles here at SBNation.com and at our Blue Jackets blog, The Cannon.

That's it for the draft on this Friday. We'll have two more picks, from the New York Islanders and Ottawa Senators, on Saturday.