With the fifth pick in SB Nation's 2011 NHL Mock Draft, our New York Islanders delegation at Lighthouse Hockey selects Dougie Hamilton, a defenseman from the Niagara IceDogs of the Ontario Hockey League. 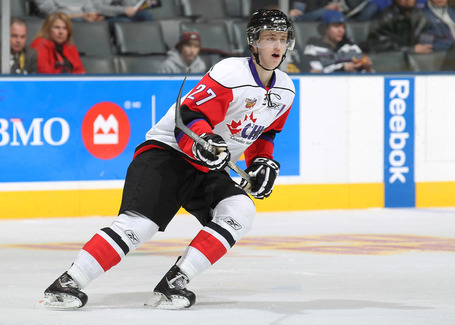 Hamilton is a tall 6'4" defenseman, and he might be a bit early of a pick with the No. 5 selection. But that's not enough to keep our Isles bloggers at Lighthouse Hockey away from him, as they love his two-way game and his Hulk-like frame. They don't think the Isles will actually take a defenseman based on recent history, but that's not stopping them from fake-picking him.

That said, a team has 12 forwards, six defensemen and two goalies: You need twice as many forwards, period -- so reading a trend from just a few years of data is a bit of a stretch. The Islanders moved up twice to take Calvin De Haan at #12 two years ago. They passed on Luke Schenn -- who was the consolation prize for teams who couldn't get the three defenseman who went ahead of him -- when they needed picks and believed in a young center. They passed on Victor Hedman when some guy named John Tavares was available. Last year's selection of Nino Niederreiter was part of a league-wide run on forwards before Cam Fowler and, heh, Dylan McIlrath were selected.

Read more about the pick over at Lighthouse Hockey. Learn more about Hamilton with this profile from our Columbus Blue Jackets blog, The Cannon.