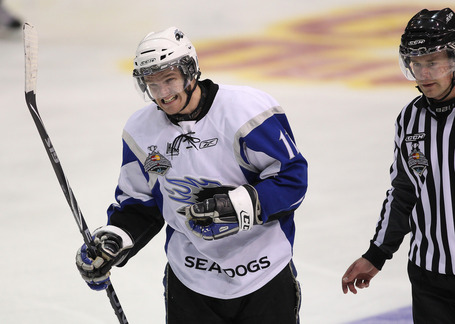 Ranked third among North American skaters by Central Scouting, Huberdeau is coming off a huge season with the Saint John Sea Dogs that saw him take home the Stafford Smythe Memorial Trophy as Memorial Cup MVP. The best player on Major Junior hockey's best team in 2010-11. Not too shabby.

Silver Seven agrees, and here's why they think Huberdeau would be a perfect addition to the Senators organization.

First off, he'd be the top offensive prospect drafted since Jason Spezza was selected in the 2001 draft. Huberdeau would become the first truly offensive prospect in the Senators development system in ages, and will have the opportunity to play NHL hockey as early as the 2011-12 season if he can impress the new coach enough in the process. Whether or not he plays next season, he will spend the better part of the next decade under the tutelage of Spezza himself as a leading offensive pivot on the Senators, if he can translate his junior-level success into professional hockey.

Read more about the pick at Silver Seven. For more on Huberdeau, check in with player profiles at SB Nation's The Cannon and In Lou We Trust.