With the 8th pick in SB Nation's 2011 NHL Mock Draft, the Columbus Blue Jackets delegation from The Cannon selects, from the Portland Winter Hawks of the Western Hockey League, left winger Sven Bartschi. 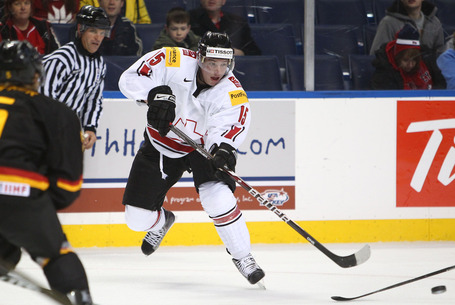 The Swiss native is already familiar with Columbus prospect Ryan Johansen, having played with him in Portland, and the rookie Bartschi led the WHL in first-year scoring this past season. The Cannon thinks he'll be a great addition that'll add depth on the wings, something that Columbus needs after addressing the center position.

"By bringing in Bartschi, we give the Jackets a talented scorer who is willing to drive to the net, playing a much "bigger" game than his 5'10 180lb. frame. With experience playing with Ryan Johansen this year, the Jackets have had plenty of time to get a good look at the Swiss winger, and we suspect they like what they've seen. He's got a fantastic gift for "finishing", quick hands, and one hell of a shot. Most importantly, you can't teach scoring instincts, and that's one thing Sven has in spades."

Read more over at The Cannon. You can also find a draft profile on Bartschi over there as well.