With the 9th pick in SB Nation's 2011 NHL Mock Draft, our Boston Bruins delegation at Stanley Cup of Chowder selects, from the Kitchener Rangers of the Ontario Hockey League, defenseman Ryan Murphy. 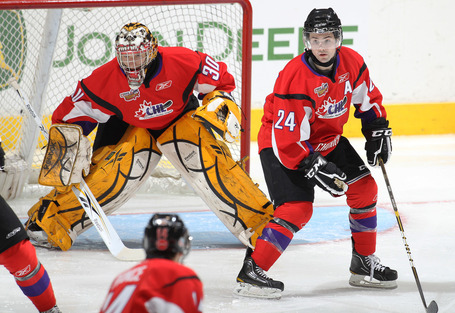 Murphy is a pretty small, under-6-foot-tall defenseman from Kitchener, and his offensive game is what makes him. He's a power play quarterback, can skate with the best of them in the OHL and is good on the breakout. He lacks some skill in his own end, and surely some of that has to do with his size.

Here's how Stanley Cup of Chowder justified their pick:

Murphy is a mobile undersized defenseman, who is listed between 5'10" and 5'11" and 166 lbs and 176 lbs (depending what you read). The 18-year-old blue liner has great offensive ability and likes to jump up into the play. According to scouts, Murphy's skill set makes him a tremendous asset on the power play. The biggest knocks on Murphy seem to be his defensive zone play and lack of size.

Read more on the pick at Stanley Cup of Chowder, and learn more about Murphy at SB Nation's In Lou We Trust.