With the 10th pick in SB Nation's 2011 NHL Mock Draft, our Minnesota Wild bloggers at Hockey Wilderness select, a center from Djurgarden of the Swedish Elite League, Mika Zibanejad. 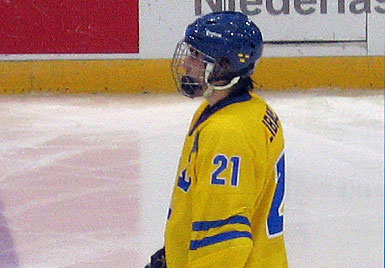 Zibanejad has had quite the few weeks in the run up to the 2011 NHL Draft. He's been projected all over the board in this draft, and some people are saying he could potentially go as high as the top five at this point. If you ask our Calgary Flames blog, Matchsticks & Gasoline, he deserves the praise. Lighthouse Hockey, our Islanders blog, seems to agree as well.

Our Oilers blog, the Copper & Blue, interviewed Zibanejad last November, and the center called him "big and strong with decent speed and a good shot. He also said that he's the kind of guy that "gives it his all," which is kind of obvious when you're a first round draft pick in the NHL -- at least, usually.

I love the fact that Zibanejad fully understands his role as a powerforward and has become very accomplished at it. He may not be as flashy as prospects like Ryan Strome or Jonathan Huberdeau, but Zibanejad plays with tons of fire and knows that hits and battles along the boards wins pucks. He knows he has a good frame to give the hit and to screen the goalie. His understanding of the game and his role will make him a very successful NHL player, in any role.