With the 12th pick in SB Nation's 2011 NHL Mock Draft, our Carolina Hurricanes delegation at Canes Country selects, a center from the Niagara IceDogs of the Ontario Hockey League, Ryan Strome. 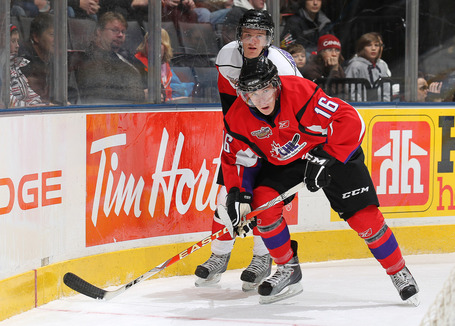 Strome scored 106 points in the 2010-11 season with Niagara, and a lot of scouts expected his season to wind down after a furious start to the year. It didn't. Strome kept a hot pace all year long, and when you add his scoring acumen to his top-notch skating and crisp vision, you have a dangerous prospect.

For Canes Country, the decision to draft Strome was an easy one.

After all my previous talk about wanting to draft a defenseman, the bottom line is that when push comes to shove it is just too difficult to turn down a player who you think is absolutely the best still standing, regardless of position.

That was the case for us when we saw Ryan Strome's name still off the board when it came to the Hurricanes turn at number 12.