Brad Marchand is a man possessed in Game 7. First, he completely made the play that put the Boston Bruins up 1-0 in the first period by beating every member of the Vancouver Canucks to the puck. Then, he walked through the crease, grabbed a puck and stuffed it along the post where Roberto Luongo made the initial save.

Unfortunately for Luongo, he couldn't keep hold of the bouncy puck in the sweaty Rogers Arena air. It fumbled through his glove and just across the goal line, and Marchand began celebrating.

Minutes later, it looked like the Canucks were going to get a break. Zdeno Chara was called for a penalty, and when the best penalty killer and the best defenseman on the team is in the box, it's obviously a huge chance to capitalize and trim the lead.

But despite Vancouver stepping up and getting chances, which were promptly denied by Tim Thomas, it would all be for naught.

Shorthanded, Patrice Bergeron took the puck up ice and out-skated the Canucks to the net. He was taken down from behind and a penalty was called, but the puck continued on it's path and wound up in the back of the net. Good goal, 3-0 Bruins lead. Rather incredible turn of events.

The Canucks now need at least three goals on Tim Thomas in the next 20 minutes. Luongo doesn't like thinking about that (via Bubbaprog). 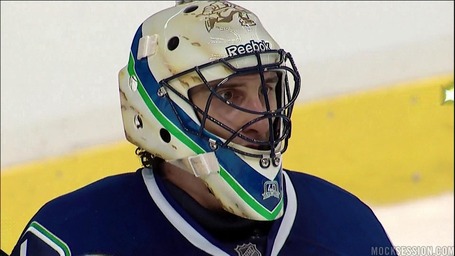