Share All sharing options for: Vancouver Riots After Losing Stanley Cup To Boston Bruins In Game 7

The City of Vancouver is on fire on Wednesday night after the Canucks lost Game 7 of the Stanley Cup Finals to the Boston Bruins at Rogers Arena. Crowds of up to 100,000 people gathered downtown, as they have for the entire postseason, to watch the game on big video screens in the streets.

After the game ended, those crowds turned violent. Here's an image from the CBC: 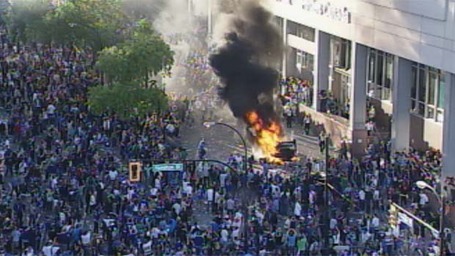 Danny O'Neil of the Seattle Times is also Tweeting out photos from the streets, and this one is rather impressive. Seems to be a close up of the same overturned car that's been set on fire. It's still early in Vancouver, and the alcohol is surely still flowing despite the closure of liquor stores in the downtown area.

Cops are in riot gear and are taking fans down as they attempt to clear the streets, but CTV in British Columbia reports that a police car has been overturned. There's no reason to expect that this stuff is the end of it. Likely and unfortunately, it's on the beginning of the mayhem in the streets of Vancouver.

Stick with this StoryStream for complete coverage of Game 7, before and after. For coverage on the Finals, stick with our Stanley Cup Finals hub, our Canucks blog, Nucks Misconduct, and our Bruins blog, Stanley Cup of Chowder.