Share All sharing options for: Hours After Vancouver Riots, Residents Try To Clean Up, Rebuild Image

When your city becomes an international focal point thanks to nasty rioting after a sporting event, it's not easy to rebuild the image that was quickly tarnished in just a matter of hours. But that's what people in Vancouver are trying to do Thursday morning, the morning after rioting tore apart the downtown core following Game 7 of the Stanley Cup Foinals between the Canucks and Boston Bruins.

The effort is two-fold. For starters, volunteers are swarming downtown in an attempt to clean up the damage. The effort is being organized through social media, most notably on Twitter by @VancouverClean, which has a pretty damn clever logo. Messages, gestures and scenes like this are common-place in Vancouver today.

Anyone downtown: I've got junk trucks and labour wanting to help trashed businesses etc. for free. Would be welcome? (cc @vancouverclean)via TweetDeck 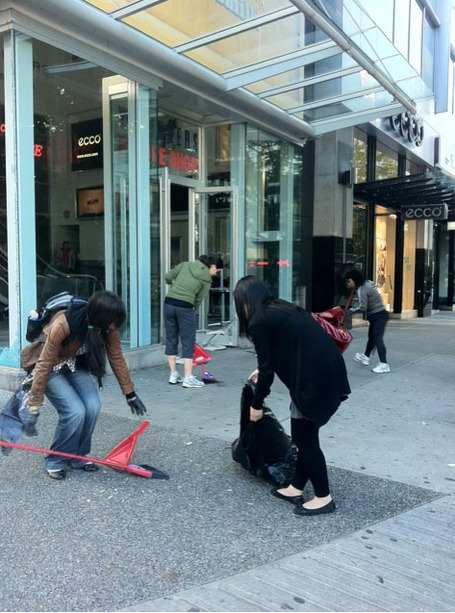 On the flip side, there's a pretty strong effort going on Facebook and Twitter to find the identities of people who committed illegal acts on Wednesday night. Facebook groups have been set up where people are posting photos and videos in hopes that others will recognize the criminals involved, and Vancouver police are also accepting leads, tips and photos via robbery@vpd.ca.

The name Brock Anton might become synonymous with the criminal activity that took place during these riots. He's been trending on Twitter thanks to a foolish Facebook post he made after getting home late Wednesday. 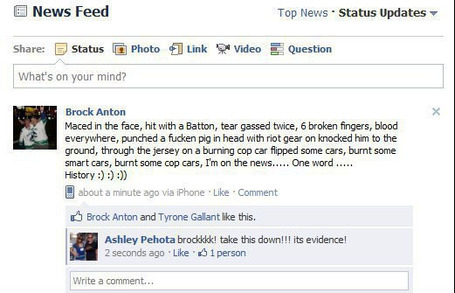 The best part, perhaps, is that his Facebook page is private, meaning one of his friends had to be the original person to screen capture this image. Oh, and the fact that he liked his own Facebook status. Who does that? I'm sure it's only a matter of time before this guy, and other geniuses just like him, are brought to justice.

Maybe then the City of Vancouver can recover from the embarrassment.

Stick with this StoryStream for all the coverage of the Vancouver Riots, to which you can subscribe via RSS. If you're looking for actual hockey coverage, head over to our Game 7 Stanley Cup Finals StoryStream.