With the 13th pick in SB Nation's 2011 NHL Mock Draft, our Calgary Flames delegation at Matchsticks & Gasolineselects, from the Prince Albert Raiders of the Western Hockey League, center Mark McNeill. 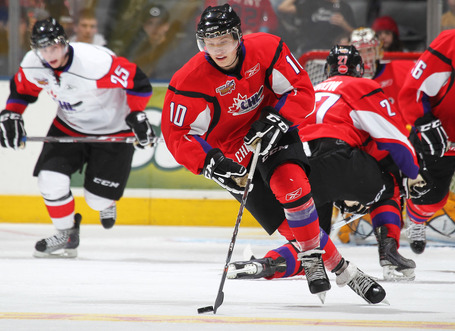 McNeill is a well-rounded, two-way center that put up 81 points in 70 games with Prince Albert this past season. He's known for his well-roundedness, mostly: an ability to put the puck in the net, the ability to use his size effectively and responsibility in all three zones of the ice.

Here's how M&G justified this pick:

Mark McNeill is probably the closest thing to a complete, well-rounded player that could be available to the Flames with the 13th overall pick. While there's no question that the Flames need to draft for offence, this organization is not one that selects its prospects based on goal-scoring prowess alone, as Arik mentioned above.

McNeill is the first player I've looked at thus far who has been evaluated positively when it comes to strength, skill, and skating/speed and the fact that he has been described as defensively responsible, tough to play against, and is accustomed to playing in all situations with the Prince Albert Raiders is all the more encouraging. The fact that he models his game after Ryan Getzlaf doesn't hurt either.