With the 14th pick in SB Nation's 2011 NHL Mock Draft, our Dallas Stars delegation at Defending Big D selects, a defenseman from the Saskatoon Blades of the Western Hockey League, Duncan Siemens. 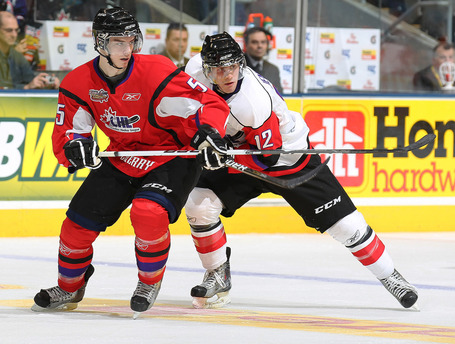 Siemens is a 6'2" defenseman from Saskatoon who was ranked 10th by NHL's Central Scouting in their final rankings. He's another one of these big defensemen that can move their feet as well, and as a result, he can keep up with the much smaller, speedier forwards that he faces.

For the Stars, he fills an organizational need, and that's why DBD has selected him.

Nearly every scouting report lists him as a nasty player who is "not fun to play against", who won't hesitate to drop the gloves and is willing to do anything necessary to make the plays in his own end. He's stated over the course of this past season that he wants teams to fear him when he's on the ice, telling NHL.com that he wants to model his game after Scott Stevens.