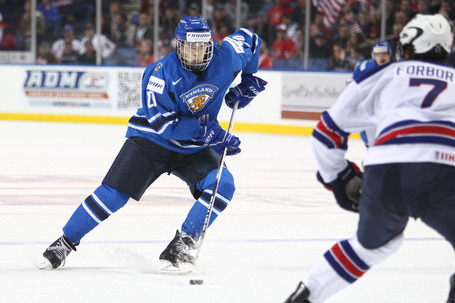 Armia is a skilled 17-year-old forward playing with the big boys in Finland's top league, SM-Liiga. He scored 18 goals tihs past season and he's the fourth-ranked European skater according to NHL Central Scouting, dropping a few spots from his second-place ranking at the midterm.

At 6'3" and 187 pounds, he's a pretty big kid that will probably fill in to his frame a little more over the next few years.He could stand to use that size to his advantage more in the defensive end of the ice.

Aside from Chris Kreider the Rangers don't have any other pure goal scorers in the farm system. Armia fixes that problem instantly. If he reaches his potential, he will be a lethal goal scorer for the Rangers for years to come. The Rangers haven't had a plethora of those players in recent memory, and Armia and Kreider could pair up to be one of the most dangerous one-two punches in the NHL.