With the 16th pick in SB Nation's 2011 NHL Mock Draft, our Buffalo Sabres delegation at Die By The Blade selects, from the US National Team Development Program, center Tyler Biggs. 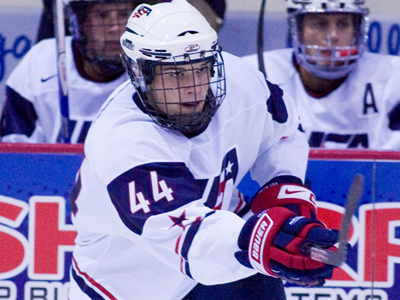 Biggs is one of the few players who has shunned Canadian Major Junior stardom for a chance to play in the USHL and American college system. He was a second round pick in the Ontario Hockey League draft, but decided instead to join the USNTDP before committing to Miami University in Ohio. Not a bad choice.

Western College Hockey Blog sees Biggs as a contributor in the NHL, at worst a third or fourth liner with some touch, at best an established NHL scorer.

Here's how Die By The Blade justifies their pick:

Biggs plays much like his name suggests, big. He is a physical player that likes to be in front of the net and could be shifted over to center, where the Sabres need some help in the prospect pipeline. Biggs was ranked fifth among North American skaters in the midterm Central Scouting rankings, but dropped all the way to 22nd when the final rankings came out.