With the 17th pick in SB Nation's 2011 NHL Mock Draft, our Montreal Canadiens delegation at Eyes On The Prize selects Mark Scheifele, a center from the Barrie Colts of the Ontario Hockey League. 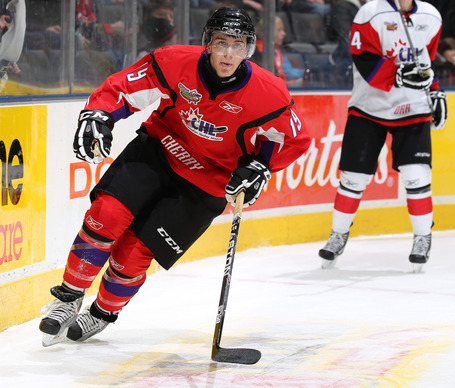 Scheifele is a tall center that played on a somewhat weak Colts team in 2010-11, but it's easy to say he's the most exciting player they have. He put up 75 points in 66 games with Barrie on the year, and those are numbers that look to improve, and they should translate to the professional level as well. He's a little on the smallish size and can definitely afford to pack some muscle onto his tall frame, but hey, he has the tall frame, and you can't teach that.

Here's how EOTP justified their pick:

Standing between 6'2" and 6'3", depending on which site you look at, Scheifele already brings something clearly missing in the Habs lineup to the table, a big right-handed center. His lanky 173 lb frame will certainly beef up through development.

If Lars Eller isn't up to the task, perhaps this Kitchener, ON native will be the answer to the missing piece of the puzzle up front in the Canadiens future.