An entire hockey season was lost just six years ago thanks to rising player costs and a stark disparity between the rich and poor. Now, as the NHL salary cap increases again, are we heading down the same path of destruction?

In 2004-05, we lost an entire season of NHL hockey. It was excruciatingly painful, and just as fans of the NFL and NBA are experiencing this year, it's really pretty unfair. Millionaires versus billionaires and all of that stuff.

The crux of the NHL lockout argument was really quite simple: the players wanted to keep the extremely large cut of the pie that they had held for so many years, while the owners were adamant about the fact that they needed to curtail players salaries because, quite frankly, the system wasn't working.

The league was losing money. Small-market teams were definitely losing money, and ultimately, they couldn't compete with the Detroits and New Yorks and Philadelphias of the world when it came to free agency. When six or eight teams have all the money in the world and the ability to spend as much of it as they want, and the rest of the league has a strict budget to stick to, it creates a simple imbalance of power.

This, at least, was the argument of the NHL and their owners during the 2004-05 lockout, and if you agree with it, you probably believe that the lockout was a worthwhile sacrifice. If we had continued down that road, we could have been facing league contraction on a mass scale, with Southern markets and perhaps even some Canadian markets unable to stay competitive.

Now, six years out from the end of that lockout, the NHL is heading right down the path they sought to steer themselves away from, and it's all based on the salary cap that was instituted in 2005 when the NHL Players Association signed a new collective bargaining agreement with the league.

The NHL's salary cap was $39 million in that first year, and part of the deal between the league and the players was that the cap would increase at a fixed rate right along with league revenues. As the league gets more money, the players get more money. They always get their fair share of the pie, so to speak.

Moving right along with that cap is the salary floor, or the minimum each team must spend on player salaries in a season. In accordance with the CBA, the floor is fixed to the cap no matter what, exactly $16 million below. As the cap grows, the floor grows right along with it.

As reported late Sunday evening, the salary cap is expected to rise even further in 2011-12, perhaps higher than anybody expected. It will be $64 million next season, and the floor will rise all the way to $48 million per season, $9 million higher than the original salary cap in 2005-06. 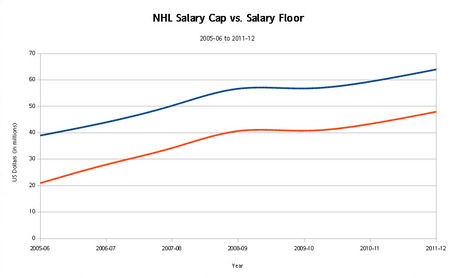 And this is where the problems begin. We lost an entire hockey season over rising player costs, and as the cap now sits $25 million above where it began just six years ago, we're approaching dangerous territory yet again.

Of course, it's certainly good news that league revenues are up, and with the new American television deal with NBC, new arenas in Pittsburgh, New Jersey and one coming on Long Island, and the relocation of the struggling Atlanta Thrashers to Winnipeg, those revenues will likely only increase further.

But just one glimpse at a salary chart from 2003-04, the year just prior to the lockout, shows why there's concern around the rapid increase in both the salary cap and floor. That year, the Detroit Red Wings led the league in total payroll, spending $77.9 million on their roster. Three other teams would have been above the new salary cap -- the New York Rangers ($76.5 million), Dallas Stars ($68.6 million) and Philadelphia Flyers ($68.2 million).

18 teams would be below the current salary floor if they spent at 2003-04 levels, the year prior to a lockout forced on by a stark disparity in league wealth and rising overall player costs. Tell me how this makes any sense.

Obviously, things are a lot different now. The overall health of the league is a lot better than it was in 2003-04, as is the overall health of a lot of teams (looking at you, Penguins and Blackhawks). Much of that has to do with the success of the 2005 collective bargaining agreement, too.

But there are still a ton of teams that aren't completely healthy (you knew that), and if the Canadian dollar loses some of its value after an incredible rise against the American dollar in the last several years, some of the smaller markets north of the border could easily be in trouble yet again as well. This is a main argument against the relocation to Winnipeg, of course.

In 2012, a new CBA will be agreed upon between the NHL and the NHLPA, and in a lot of ways, we're going to be fighting the same battle yet again. The rich are getting richer and they're gaining more power as the cap continues to rise, and the poor are going to get poorer as they're forced to spend more and more money on their rosters.

It's a serious problem, andhopefully we don't have to lose an entire season to correct it this time.

With information from Behind The Net Hockey, USA Today and CapGeek.