With the 19th pick in SB Nation's 2011 NHL Mock Draft, our Edmonton Oilers bloggers at The Copper & Blue select Matt Puempel, a left winger from the Peterborough Petes of the Ontario Hockey League. 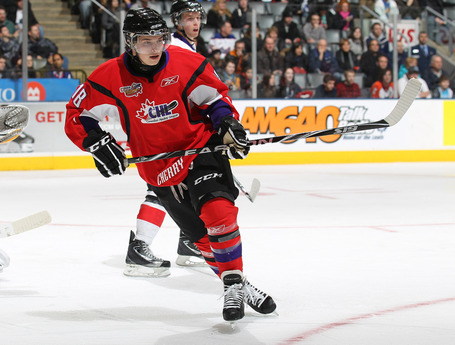 Puempel, ranked the 28th North American skater in the final rankings from Central Scouting, has been a phenomenal two-year career on a horrible team in the OHL, the Petes. He put up 69 points in 2010-11, a year after being named the OHL's Rookie of the Year in 2009-10. He's a bit of a rarity in the top portion of this year's draft in that he's more of a pure goal scorer than a well-rounded player.

Matchsticks & Gasoline writes that Puempel doesn't want to be labeled as a one-dimensional player, but he has some work to do on his defensive game before that becomes a reality.

Here's how The Copper & Blue justified the pick:

At this point it is obligatory to talk about what a well-rounded player the seemingly one-dimensional prospect is. I will not bore you with such nonsense. Matt Puempel is a goalscorer. The hockey gods put him on this earth to score goals and, for his entire career since bantam, that's what he's done. He's put the puck on the net, and a reasonable percentage of the time the puck has therefore gone in the net. He will sometimes pick up an assist off a rebound or because defenses are so petrified by his shooting that they forget he can pass the puck, but he is a shooter through and through.