With the 20th pick in SB Nation's 2011 NHL Mock Draft, our Phoenix Coyotes bloggers at Five For Howling select Vladimir Namestnikov, a center from the London Knights of the Ontario Hockey League. 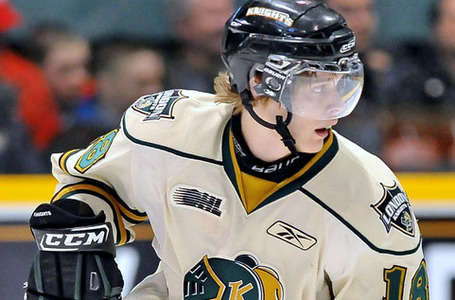 Namestnikov's strongest asset is his last name, which allows him to stand out relative to the North American players he goes head-to-head with in the OHL, thanks to the deep penetration of jersey letters into his arm pits. He's also a fast skater, and if you ask scouts that have seen Namestnikov play, that's usually the first thing you'll hear about.

He's a little undersized for his tall frame, but he's only been in the OHL for one year, so that's presumably something he can improve upon.

Here's how Five For Howling justified the pick:

He's a solid two way player that can dangle and pass extremely well, but also gets back on defense and isn't a liability at all. He's also played well digging for pucks in the corners and upping his physical game since coming to North America. Another plus is that he's a center which the Coyotes are certainly short on positionally.