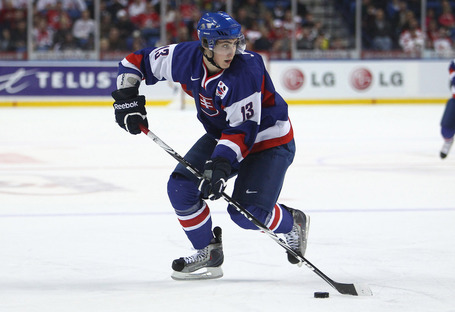 Jurco is notorious for his abilty to dazzle in the shootout, but the product of Slovakia is more than just a pretty face for the NHL to slap on a poster. Flat out, this guy is one of those guys with offensive skill -- no more, no less. He can dazzle with the moves, place an accurate shot and seems to be adapting to the North American game rather nicely.

Here's what Silver Seven said about the pick, their second in this draft:

Ottawa's most glaring hole is that they don't have any top line wingers in their system. As of today there isn't anyone who can be legitimately called a top-3 forward prospect, though many have that hope for Bobby Butler. Officially standing 6'2" and weighing 187lbs at the NHL combine, Jurco posted some impressive strength numbers: Top 3 for grip strength, Most Bench Press reps (tied with three other players) and Top 6 for Seated Medicine Ball throw.

It's not at all surprising, then, that Jurco has a tendency to get in front of the net and not be dislodged. He is also known to be quite fast, and his stickhandling skills cause rave reviews, as you'll soon read. In short, he is fast, strong, and skilled -- everything the Senators need.