With the 22nd pick in SB Nation's 2011 NHL Mock Draft, our Anaheim Ducks bloggers at Battle of California pinch-hit for the Anaheim Calling guys and selected, a left wing from the Windsor Spitfires of the Ontario Hockey League. 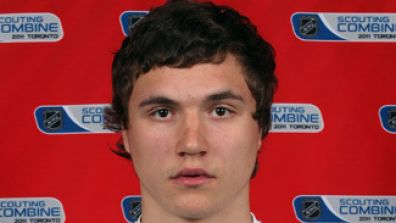 Another Russian who has a really long name and North American experience under his belt, Khokhlachev scored 76 points in 67 games this past season with the Spits. He's another offensive wonder that has a little bit of an issue with his size, but that's part of the deal when you have a player coming over from Europe with limited experience on the smaller rink this side of the Atlantic.

Khokhlachev, whose name will not be written in this post again since it causes brain pain, has only played one year in North America, and with a late 1993 birthday, he's one of the youngest players in the 2011 draft.

Read more on the pick at Battle of California. You can find every pick from our 2011 NHL Mock Draft in this StoryStream.